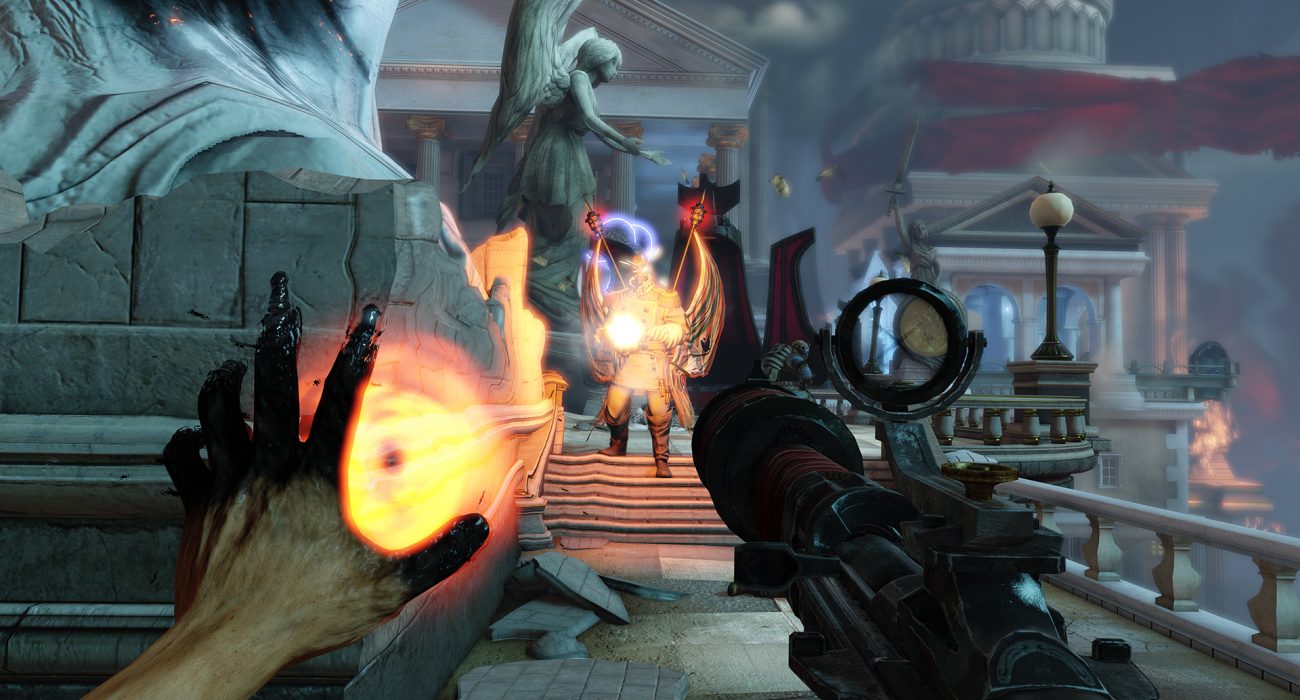 In 2007, Bioshock was released to universal acclaim. Perfect scores and Best Game awards came pouring in. So when I say that the true sequel, Bioshock Infinite, is every bit as good, it means a hell of a lot.

Infinite leaves behind the murky depths of Rapture, and instead soars in the open skies of a new city, Columbia. Founded by a man calling himself a Prophet, the city stands upon his Christian beliefs and the ideals of Washington, Franklin and Jefferson. Columbia captures the essence of an idyllic 1912 America on the surface, with wholesome families, parades and good, old-fashioned heroes.

I spent my first hour exploring. I gazed around at the beautiful city nestled between the clouds. I listened gleefully to the many conversations the citizens were having. Then I watched a parade of floats pass by. Later, I tried every stall at the fair, which served as a kind of weapons tutorial. I was totally seduced by Columbia. Then everyone turned out to be super racist.

The jarring introduction to this world reflects the city as a whole. Whereas Rapture was a shadow of it’s former self by the time Bioshock took place, Columbia is a city at it’s peak at the beginning of Infinite, and the arrival of protagonist Booker DeWitt ignites a sharp decline. Picking through the ruins of Rapture and piecing together what happened was engrossing, but living through the downfall of a city and understanding why is what makes Columbia outshine Rapture.

Booker DeWitt is a man who owes the wrong people too much, and has to travel to Columbia to rescue a young lady, Elizabeth. How he has to do this wasn’t specified. Between all this is civil unrest, and uprising from the people who feel wronged by the Prophet.

On the one hand, Booker has access to a variety of scientifically magic powers called Vigors and, on the other, a whole arsenal of guns. One Vigor can pull distant enemies in for close kills, another can launch them helplessly into the air ready to be picked off.  Combat in Infinite is a more fluid, streamlined version of the fighting in earlier Bioshocks. Swapping guns and abilities feels dynamic.

The best action kicks off in big areas littered with possibilities. Gun and Vigor combinations can suit many play styles, skylines can be used to whizz around and dive onto foes, and Elizabeth can use her abilities to change the battlefield. She can bring into reality many helpful items, from weapon crates to automated turrets that can change the tide of battle.

Elizabeth herself is a really handy AI partner. The game helpfully tells you that you don’t need to look after her in combat, which drew a big sigh of relief from me. She spends her time finding any kind of supply you might be short of, and can be a lifesaver in a pinch.

It’s hard to find faults with Infinite, although some do exist. Most sorely missed are the neat puzzling sections that punctuated the gameplay in the original Bioshock. While the enemy varieties are each uniquely challenging, nothing is quite as intimidating as going toe to toe with the Big Daddies and Big Sisters of Rapture.

Scattered around Columbia are 80 audio logs, special stat upgrades and many sight seeing opportunities. Finding them all is well worth doing to gain a deeper understanding of the people and city as a whole. The hardcore 1999 mode should stump even the most dedicated of fans.

A big part of what makes Infinite so memorable is the whole look of the game. The vibrant city floats among the clouds, and viewing it for the first time is simply breath taking. Grand houses and majestic plazas give way to dark corners and crumbling structures as time goes on. Infinite also has an outstanding soundtrack. Expert score that intensifies the impact accompanies every emotional scene. Around the game, 1912-ified versions of pop classics, such as ‘Tainted Love” and “Girls Just Wanna Have Fun” can be heard.

While 2013 will probably be remembered as the year of the new generation, it should really be remembered for the big games that saw off the old generation. Bioshock Infinite is possibly the biggest and best of these. It is an absolute must-play, and a compelling reason for anyone to buy a console if they haven’t already even at this late stage in the cycle. Quite simply, Bioshock Infinite is art.

It is rare these days that such a big game is released without a multiplayer mode. After sampling the unnecessary offering in Bioshock 2, it is safe to say that having no multiplayer is both rare and a gift. Bioshock Infinite is, without doubt, the best single player experience I’ve had with a game in years. The story it tells is engaging on every level, and the gameplay is a delight. Much like going back to a favourite book or film, I’ll be going back to this game again and again.