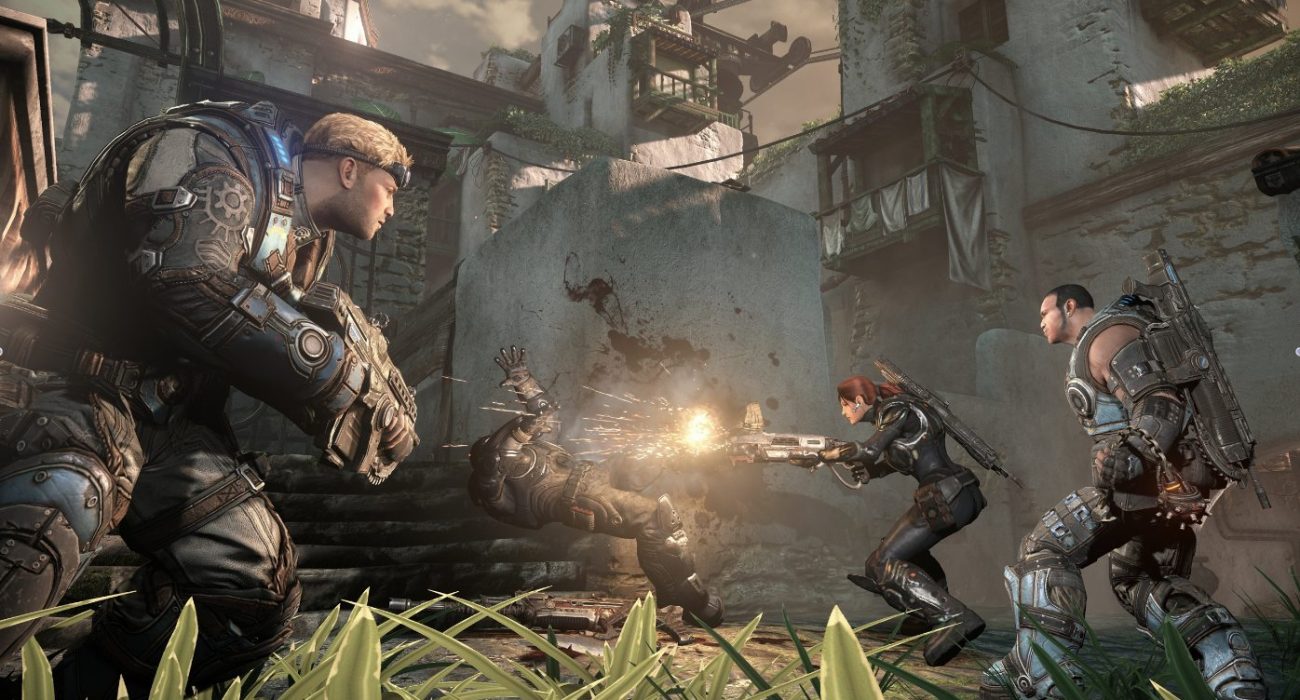 For the first time in the series, the adventures of Marcus Fenix and Delta Squad take the backseat. Set just after Emergence Day, Judgment follows Kilo Squad lead by series favourites Damon Baird and Augustus “The Cole Train” Cole as they defend themselves against war crime charges in a military court run by Col. Ezra Loomis.

You play through these testimonies justifying your actions to Loomis. Each testimony is broken down into sections; each section gives you the option of taking on declassified missions. These allow you to change your testimony to sound bolder and braver, but ultimately do not affect the story. One declassified mission has you battling across rooftops with almost no ammo, while others involve finishing the section only using Sawn-offs and Boltoks. The enjoyability of these missions varies, the ones restricting your weapon selection and toughening enemies’ amp up the intensity and add to the challenge. Others are at best lazy and at worse frustrating, the worst offender being the arbitrary time limits, that do nothing to enhance the gameplay beyond frustrating the player.

The incentive for imposing the additional challenge on yourself is that it allows you to accumulate stars faster. Your performance in each section is given a star rating, in order to get the three star rating at the end of the section, you must play an especially aggressive style of play, racking up Gib (Ground into bits) kills and executions. The star rating system works because it pushes you towards a more enjoyable style of play providing significant replay value.

Campaign takes a reasonable eight hours to complete on Hardcore difficulty, and generally sticks to the classic Gears formula. Dialogue between Kilo Squad felt forced and left you longing for Marcus and Dom to return. Cole can usually be counted on for a few laughs but sadly, the banter between Cole and Baird wasn’t enough to carry the story. New additions to Kilo Squad include Paduk, an ex-UIR man who still carried a grudge towards the COG from his experience in the Pendulum wars, and Sofia, an ex-journalist tasked with keeping an eye on Paduk.
Sofia and Paduk are welcome additions to the series, with Paduk in particular having the best lines, both in terms of emotion and humour.

With the new campaign comes new weapons, the most exciting of which is the Booshka, firing grenades that bounce off walls and explode on contact with the enemy. Other new additions include the Tripwire Crossbow, which fires an explosive tripwire, and the Breechshot, a powerful rifle that kills most enemies with one headshot.

Missing from the campaign mode were truly epic moments, perhaps Gears fans will have had their expectations sent unreachably high, but nothing reached the awesomeness of riding a Brumak, or watching a Rift Worm tear through a city.

Campaign also features horde-style objective defence sections, these are a welcome change of pace, and probably the best moments in Judgment’s campaign involve defending your AI from waves of Locust.

Once you’ve collected 40 stars, you unlock an additional campaign in Aftermath. Set parallel to the final events of Gears of War 3, you get to see what Kilo Squad did as Delta squad ended the war. While, additional gameplay is always welcome, Aftermath feels a lot closer to Gears 3 than it does to the campaign in judgment. The levels are cramped, and the pace is slower. Aftermath also lacks the star rating system, which feels weird after you’ve torn through campaign with it.

Gone are Horde and Beast mode and in their place are Survival and Overrun mode. The main difference being that you have to defend an objective rather than just surviving. Overrun differs from Survival mode by allowing you to play as the Horde. However like in Beast mode, controlling the Horde is clunky and doesn’t live up to the promise of destroying everyone as a Corpser.

Competitive multiplayer largely sticks with the classic Gears formula, but throws in a few new modifications. You can only carry two weapons now, and you have to choose between starting with a Lancer or Gnasher, this actually works very well as a way of balancing the Gnasher. One bizarre change was the shift from COG versus Horde to COG Blue versus Red, while it doesn’t affect the actual gameplay; stylistically it feels dull.

You can now customise your weapons and armour with a variety of skins that can be unlocked through levelling up or micro-transactions. While hardly ground breaking, and at times a bit silly, these do add to the multiplayer experience.

Gears of War: Judgment is worth buying on the strength of the main campaign alone, but some strange choices with multiplayer and Survival mode not having the fun factor of Horde mode means that it won’t be remembered as a high point in the series.