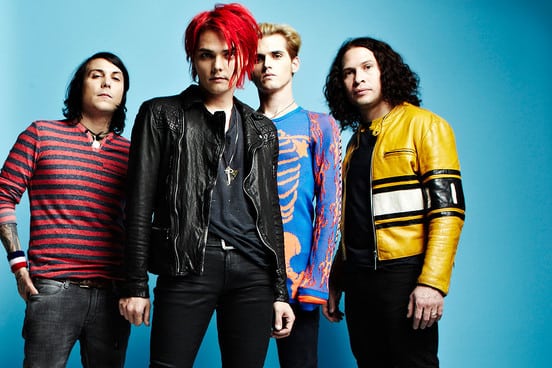 The band as they appeared during the 'Danger Days' era. Photo: Dean Chalkley

Feature: The Black Parade Is Dead!

On March 22nd, New Jersey quartet My Chemical Romance decided to call it a day after 12 years together. The news came as a shock to many including Gerard Way’s wife and Mindless Self Indulgence bassist Lyn-Z, Jared Leto from 30 Seconds to Mars and Mark Hoppus from Blink 182. Actually, Hoppus tweeted he was the one responsible for the break up. Joking aside, the only member who replied regarding the split was guitarist Frank Iero. Iero claimed “Things that should be simple and easy rarely ever are.”

Within hours of the announcement some of the top trends on Twitter were regarding MyChemRo. I can understand why people want these bands to last forever because they have spent much of their lives listening and following these bands. For instance, MCR were my first gig. While I am one for nostalgia, I still believe this is best for the band and its members. Why carry on to the point where the current resentment is too fierce to even consider the idea of reuniting? At least this way, a few years down the line, maybe they will change their minds.

But why did they break up? 2013 was shaping up to be a good year for them having released Conventional Weapons last month and a new album due to come out later this year. Personally, I believe the band had struggled to cope with the fame that 2006’s The Black Parade brought them. Their newer releases never managed to surpass The Black Parade because, although they again chose to write a concept album, they took a different, less theatrical musical direction. In addition, it took almost four years for Danger Days to be released, by which time MCR had almost dropped off the mainstream radar.

Before Danger Days was released, drummer of six years, Bob Bryar, left the band. No reason was ever given for his departure. In hindsight, this may have marked the end for MCR. After Bryar departed, Michael Pedicone replaced him. Pedicone’s tenure was notable for some major controversies, mainly his claims that he was being bullied by roadies and the band. He attempted to frame the person who he felt was responsible (or so he claimed in a later interview). The reason the band gave for his firing was that he was stealing merchandise. The relationship of the band and its crew seemed even more strained after this incident.

The media also added to the strain within the band with constant accusations of their “emo” music and The Black Parade was linked to one girl’s suicide by The Sun and NME. 100 members of the MCRmy congregated in London to protest against the Daily Mail’s coverage of the story and its biased view against the band.

The media put so much pressure on them through both hype and controversy, that it was eventually the straw that broke the camel’s back. But fear not, I don’t believe this is the end of My Chemical Romance in the long run (after all reunions are all the rage at the moment).