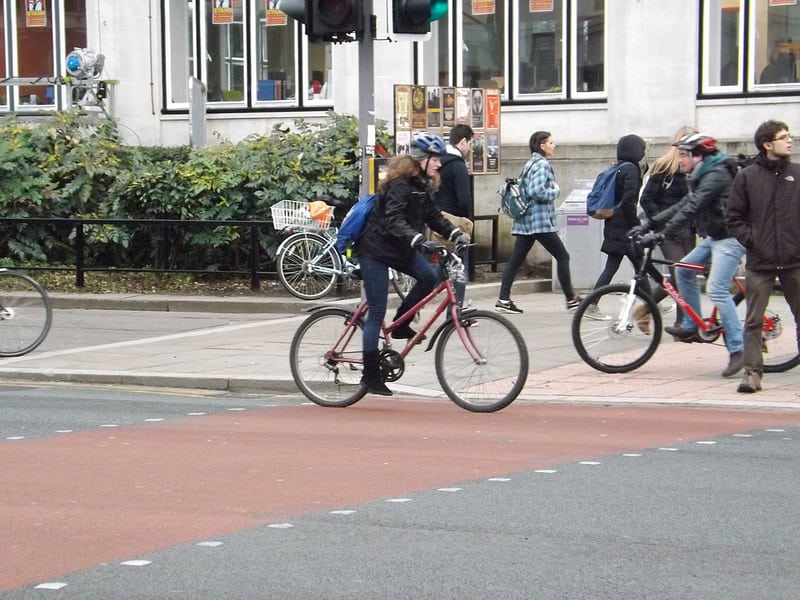 Wilmslow Road is set to receive £200,000 worth of changes in an attempt to improve safety for cyclists.

The plans, funded by the Department of Transport, will see a parallel cycle route developed between Owens Park and Whitworth Park halls of residence.

A new traffic light system – allowing cyclists to set off and turn before cars – and a “new road design” are also to be implemented by March 2014, it is hoped.

It is estimated that the Wilmslow Road cycle route is more than ten times busier than any other cycling route in Manchester.

The Wilbraham Road/ Moseley Road junction, near Baa Bar, is a notorious accident blackspot. It is estimated that up to 2,000 cyclists a day cross it.

“These changes, making one of the region’s busiest cycle routes much safer, will be a major step towards that aim”, he continued.

““More confident cyclists can continue to use Wilmslow Road and will benefit from this innovative new junction design, while those who prefer not to use major roads will be able to make the same journey using a well signposted quiet route.”

Earlier this year, a Freedom of Information request by The Mancunion revealed that there were 43 reported accidents involving cyclists along Oxford Road and Wilmslow Road from January 2011 to August 2012.

“This road has the highest rate of accidents a year involving cyclists in Manchester”, PC Andy Speed told The Mancunion.

The plans for a new traffic light system come after The Mancunion reported that police were issuing £30 on-the-spot fines for cyclists riding through red lights.

“I often go through red lights,” final year medical student Charlotte Hickson told The Mancunion, “because there are so many of them.”

“I think it is safer to maintain a constant speed with traffic, I feel like I am in more control”, she continued.