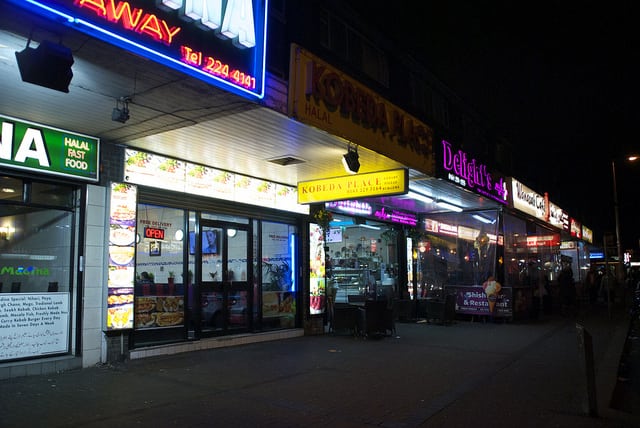 Around one incident per day is recorded on Rusholme's famous Curry Mile. Photo: Luchia Houghton-Lloyd

Naan worse than the curry mile

Wilmslow Road’s ‘Curry Mile’ has been revealed as ‘Manchester’s most anti-social street’.

The stretch of road, where thousands of students pass through on commutes to and from University each day, saw more than 260 incidents of anti-social behaviour recorded between April 2012 and January this year.

These statistics show that on a stretch of road only 800 metres long, there was around one incident of anti-social behaviour recorded every day.

The Curry Mile’s figures are a large contributing factor to the police neighbourhood area of Longsight – the area covering Rusholme – being ranked second in crime league tables across the whole of Greater Manchester.

3,359 instances of anti-social behaviour were reported in Longsight in 2012.

Student hub Fallowfield is not far behind Longsight in the rankings. The area, which also covers Withington, Levenshume and Platt Fields, saw 2,716 incidents reported in 2012.

The city centre topped the list, with more than 3,606 incidents of anti-social behaviour reported across the ten month period.

The statistics, supplied by UKCrimeStats and compiled by the Manchester Evening News, show that there is almost one incident every two hours in the city centre. Particular hotspots named were Piccadilly gardens, with 251 incidents, and The Printworks at Withy Grove, with 140.

Students expressed shock at the results of the survey.

“I’ve never experienced any anti-social behaviour myself on the curry mile.”

“I would be more concerned walking alone in a more isolated area.”

“You’d think that Fallowfield would be higher up the list, [as] you always hear of burglaries around student houses there.”

These statistics come after The Mancunion reported how the curry mile is also considered an ‘accident hotspot’ for cyclists. £200,000 of changes are now to be made to the area in an attempt to make it safer for cyclists.