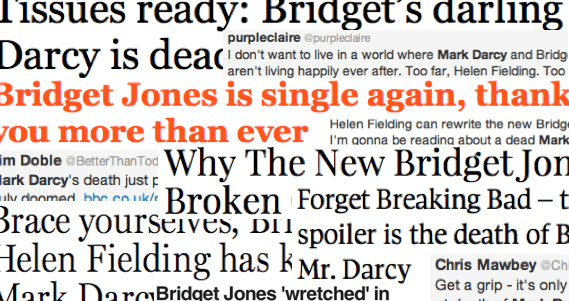 The press and the public react to the Helen Fielding killing off Mark Darcy in her latest book. Image: Esmé Clifford Astbury

The death of Mr Darcy

In advance of appearing on our shelves this coming month, an extract of Helen Fielding’s Bridget Jones: Mad About The Boy was published in The Sunday Times Magazine on 29th September 2013. First appearing in The Independent in 1995, Fielding’s column about the 30-something working singleton grabbed the imagination of women up and down the country. A year later saw the release of the novel Bridget Jones’s Diary, followed by the 1999 sequel Bridget Jones: The Edge Of Reason. Riding on their success, the multiple award-nominated film adaptations, starring Renée Zellweger, were released in 2001 and 2004 respectively.

So, what has Bridget Jones been up to for all these years? In many respects, things haven’t changed that much: Bridget still drinks copious amounts of alcohol (although she’s matured from Chardonnay to cocktails) and obsesses over self-help books, and Daniel Clever seems as sleazy as ever. Then again, Bridget has grown up, both in terms of age and with the times. She’s been catapulted into middle age: she’s now 51 and preoccupied with wrinkles. She has two children, Mabel and Billy, leading to nit-related dilemmas and parental playground warfare. Instead of habitually checking her voicemail, Bridget’s obsessed with the number of Twitter followers she has. Oh, and she’s a widow.

This bombshell was dropped on readers in no uncertain terms. At the end of the last novel, we left Bridget having just been proposed to by the slightly-awkward-lawyer-yet-gorgeous-heartthrob Mark Darcy. The third instalment starts five years on from Darcy’s death, with the knowledge that he became Jones’ husband and the father of her two children. Although how he died will not be revealed until the book’s release, the published extract featured Bridget lamenting over Mark’s death as she struggles to form a relationship with Roxster, a 29 year old toyboy. Twitter users flocked to express their discontent at the robbing of Bridget’s ‘happily ever after’ as well as their love for the deceased Darcy.

Although I personally had a day of mourning, maybe Fielding’s distressing move had a motive. The thing most readers ultimately love about Bridget is the sexual scrapes she got into as a singleton. Unattached as a widowed single mother of two, the predicaments can only be bigger and better than ever.

Bridget Jones: Mad About The Boy will be released on 10th October