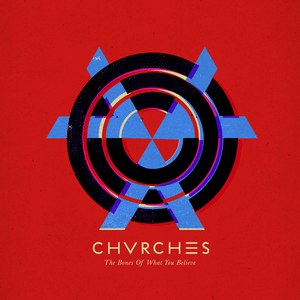 Album: Chvrches – The Bones of What You Believe

Even a cheesy track can be soulful in the right hands, and the right voice. With Lauren Mayberry’s youthful vocals backed by a bright synth sound, you’d think The Bones of What You Believe was the soundtrack to a sunny day. But with subtle, underlying references to suffocation, deception and destruction, it’s not that clean cut. Chvrches haven’t just borrowed the sound of 80s pop, they’ve carefully considered the hidden tragedy and heartbreak that influenced it. But beyond bitter drops of dark lyrics in an otherwise upbeat mix, it can be hard to understand what Chvrches are trying to say (and I’m not talking about the Scottish accents). Their music never presents an obvious story or idea – these are songs written to get stuck in your head rather than to resonate with your heart.

Although well produced, the simplicity stops Chvrches from ever creating a massive anthem. Instead, they cultivate a sense of intimacy, spearheaded by Mayberry’s voice. The album opener and single ‘The Mother We Share’ lends a hand to the intimacy straight away. Perhaps due to the childish sound to the track that characterises much of the album, or the lyrics suggesting a deeper sort of connection with the listener.

It’s hard to find an unenjoyable moment on the album, but the simplicity of the songs bites back at them. Halfway through the album the formula begins to wear thin. Despite band member Martin Doherty lending vocals to ‘Under the Tide’, it becomes difficult to differentiate it from the songs before it. With single ‘Recover’ it’s similarly hard to shake a feeling of deja vu. After a brilliant but brief section of cut up vocal samples in ‘Night Sky’ comes ‘Science and Visions’ – a track that finally stands out. It steadily builds a darker and uneasy sound not previously aired on the album and effortlessly proves itself to be the strongest song on the album. From there the remaining three songs recapture your attention and see you through to the albums end. Doherty returns to vocal duties for album closer ‘You Caught the Light’, combined with one of the few appearances that a guitar seems to make on the album. The break from the formula shows some much needed flexibility – if they can develop that further without losing their identity they’ll be on the right track.