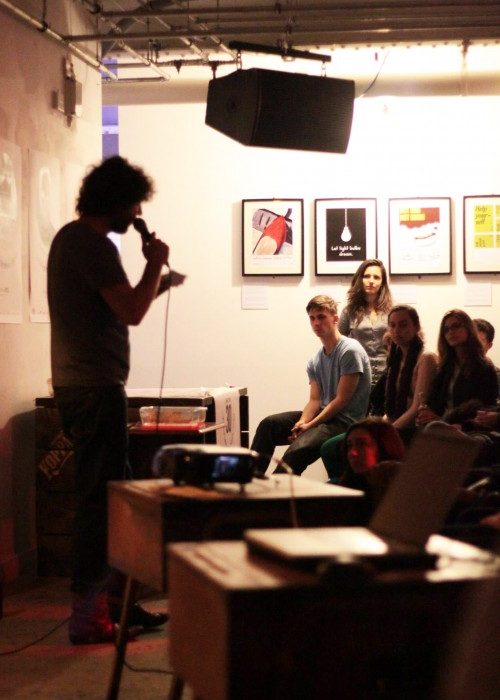 Before You're 30 (Photo: Raphaé Memon)

Before You’re 30 (BY30) is back for the new academic year! Come along to Manchester’s most unique and free art, architecture and design lecture evenings, sponsored by BDP. BY30 holds monthly evening events in Manchester’s Northern Quarter, the home of the city’s most creative industries. Our home is at ‘2022nq’, a basement bar just off Dale Street.

Attracting students and professionals alike, our events have become a way of networking and meeting new people and are all centered around three great talks. What do they talk about? Architecture, art, music, design, social issues, the future, the past, the present… whatever they deem to be inspirational. We’ve had a DJ talk about Manchester’s significant musical heritage, an architecture student turned award winning film producer as well as the only Architect to appear on the BBC’s ‘Apprentice’.

On Tuesday 1st October we had our first event of the year, with three excellent speakers. Our first speaker was Dave Sedgwick, a graphic designer based up North. He founded ‘BCN:MCR’, an event celebrating Barcelona’s design scene here in Manchester. Growing up near Southport and studying at MMU, Dave mentioned how during his youth there was little way of checking out local graphic designers – there was no way of spotting the competition. Nowadays we have various forms of social media that are used by designers to communicate and reach out to their audiences. Whilst showing some of his projects, he stated that “logo design is a lost art” and that his first graphic design task from a client involved designing a logo. Dave is currently involved with the new and innovative initiative ‘PrintandPaste’, which is a curated outdoor art space located on Chester Street just off Oxford Road. Find out more about Dave at www.designbydave.co.uk.

Second up was Vincent Taylor, who has set up ‘The Enchanted Brave’, a health food company with a difference. He started his company when he was 17 years old, and was not satisfied with some of the consumer products in the market and whether they contained exactly what they stated on the packaging. After considerable research, Vincent created and started selling a pack that contained nutritional information and a step-by-step guide to improving overall health and wellbeing. Whilst speaking, he emphasised the importance of doing what you love and displayed samples brought from his company, distributing them amongst the audience. Find out more about the company at www.enchantedbrave.co.uk.

Our third and final speaker was Javier Castanon, an architect and tutor at the Architectural Association, who spoke about his architectural journey from Madrid to Manchester and then on to London. He spoke about the importance of light in architecture with particular reference to his work on the conservation of St Patrick’s Church in Soho Square, London. Renovation and alteration work involved creating a basement under the existing Roman Catholic Church. An essential component of this basement was to allow natural light to enter using subtle manoeuvres. This would make the space feel less like it was underground. Currently, schools and local community groups use the new multipurpose space. Find out more about Javier at www.castanon.co.uk.

‘Great variety of speakers, looking forward to the next one.’

With a fantastic line-up of speakers for this academic year, keep updated by liking us on facebook (facebook.com/beforeyourethirty) and following us on twitter (twitter.com/beforeyoure30). Get there BY30!