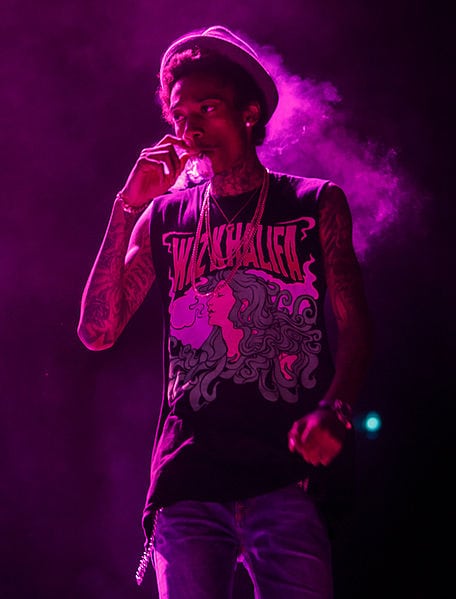 Alongside Mac Miller and Pusha T, Wiz Khalifa is an artist with a prodigious discography who reached mainstream popularity with a big hit. Missing the resurgence of underground and alternative hip-hop by a hair, the Pittsburgh native skirts an interesting line as a vibrant act in the pop world but a thinner one in the wider community. So it makes sense for him to play a packed out Apollo, unlike the O2 as with Rick Ross or the Shepherds Bush Empire with Yasiin Bey – sure he has his following, but is he as notable as he once was?

Support on this date is the bling embossed Trinidad Jame$, a notable drop in quality from A$AP Rocky and Kendrick Lamar who have toured with Khalifa in the past. Unfortunately due to a hilarious mint/pill mix-up at security on the door, I only caught the very end of Jame$’ set- but I imagine it encapsulated the rest of his performance. All Gold Everything is a truly ignorant yet expressive dedication to having fun and getting money and by god does it roar in the live arena. The stomping beat becomes titanic, Jame$’ flawless, simplistic rapping takes on a hypnotic quality and it’s a hell of a thing to hear an entire room say “popped a molly, I’m sweating” in sync. Truly outstanding.

After a short turnaround, the man of the hour is on. Khalifa certainly buys into the rockstar aspect of performance. Live bass and drums certainly fill out the stage but don’t massively make an impact until Khalifa lets each member solo, with the talent displayed it seems to be something of a waste. However, that doesn’t stop Khalifa being any less of a showman. Over the course of the concert he meets and exceeds the impact of Trinidad Jame$’ performance, realising the power in live performance over record. Whether it’s the new wave influenced beat of ‘The Thrill’ or the neo-trap (similar to Taylor Gang label mate Juicy J) of ‘Work Hard, Play Hard‘, the sheer force of Khalifa’s personality comes to the fore. Stood still and commanding the crowd with the power of his flow or gesticulating and repeating ‘let’s go!’, it’s quite remarkable he manages to expend the energy considering the profligate smoker he is. Before even the halfway point is reached the sizeable Apollo has a remarkable cannabis haze floating above it, a welcome change from the usual gross sweat or flying beer. It goes hand-in-hand with the good natured performance and atmosphere, so that even a narc must’ve sung along to ‘Young, Wild And Free’. By the time the aforementioned big hit, ‘Black and Yellow’, comes on, Khalifa has shown off the reason he still matters – in a genre still overblown with big egos and bad attitudes, Wiz Khalifa just wants to chill.