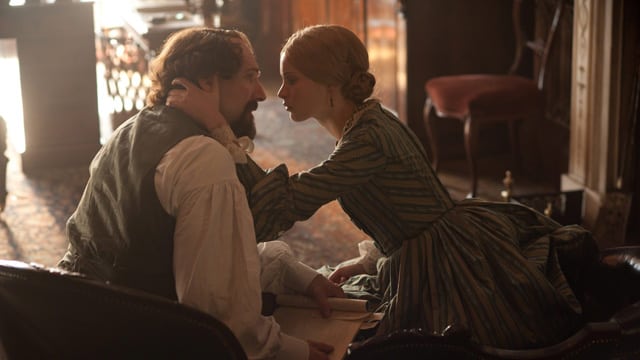 There’s always that one film every year that grabs your attention but probably (and regrettably) won’t grab an Oscar. This might be that film. The Invisible Woman (out in February) is the story of Charles Dickens’ late career and his affair with the young actress Nelly Ternan during that time.

The film stars and is directed by Ralph Fiennes, marking his second turn in the director’s chair. With two Oscar nominations, roles alongside Britain’s best secret agent and the world’s favourite wizard, an upcoming role in Wes Anderson’s much-anticipated The Grand Budapest Hotel and, perhaps most importantly, having voiced the character of Victor Quartermaine in Aardman’s Wallace and Gromit: The Curse of the Wererabbit, it would be tempting for Fiennes to sit back and take it easy. Instead, he’s doing all this alongside launching his directing career, and it looks like it’s getting off to a flying start! As an actor who started off studying art, Fiennes makes an intriguing director, combining his artistic and theatrical backgrounds to create beautiful films whilst attracting casts that produce visceral performances to bring his artistic vision to life. After his BAFTA-nominated debut directing a modern-day take on Shakespeare’s Coriolanus (talk about a baptism of fire!) Fiennes has now turned from guns and army jackets to wigs and corsets in this film with a biopic-style focus on the latter part of Dickens’ life.

Although the word “biopic” may now have us groaning as we visualise James Corden miming to opera on the rooftops of Venice, The Invisible Woman is guaranteed to be the top pick of the recent biopic bumper crop. How is it going to be any different? Well, it’s based on the book by Claire Tomalin – most famous for her seminal biographies on Jane Austen and Thomas Hardy. On top of this, the book has been adapted for the screen by Britain’s best female screenwriter Abi Morgan. As you can see, we’re already a long way from those rooftops in Venice! But it doesn’t stop there. It goes without saying that with his incredible acting and directing creds, Fiennes can attract acting talent to his films like death eaters to Voldermort. This acting talent comes in the form of rising starlet Felicity Jones, playing the title character of Nelly Ternan. As it was Nelly’s story that moved Fiennes enough to take on the project in the first place, this could be the role Miss Jones has been waiting to sink her teeth into and with a glance at the supporting cast (featuring Tom Hollander and Kristen Scott Thomas) it looks as though we could be set to see knock-out performances all round.

If that’s still not enough to stop you from going “what the Dickens?”, here are two final reasons to be excited about this film. Thanks to such colourful characters as Miss Havisham and Fagin, everyone can name a Dickens novel – even if that’s only whilst humming the tune to “You have to pick a pocket or two” – so everyone should want to find out more about such an influential literary figure and the women who supported him. More importantly, with Helen Mirren calling for greater recognition of women in film, The Invisible Woman, a story about the woman who supported Dickens, penned for the screen by Abi Morgan from the book by Claire Tomalin, can only help to promote the movement of women in film towards the ever more visible. Let’s hope it won’t similarly be left invisible amidst Oscar hype!