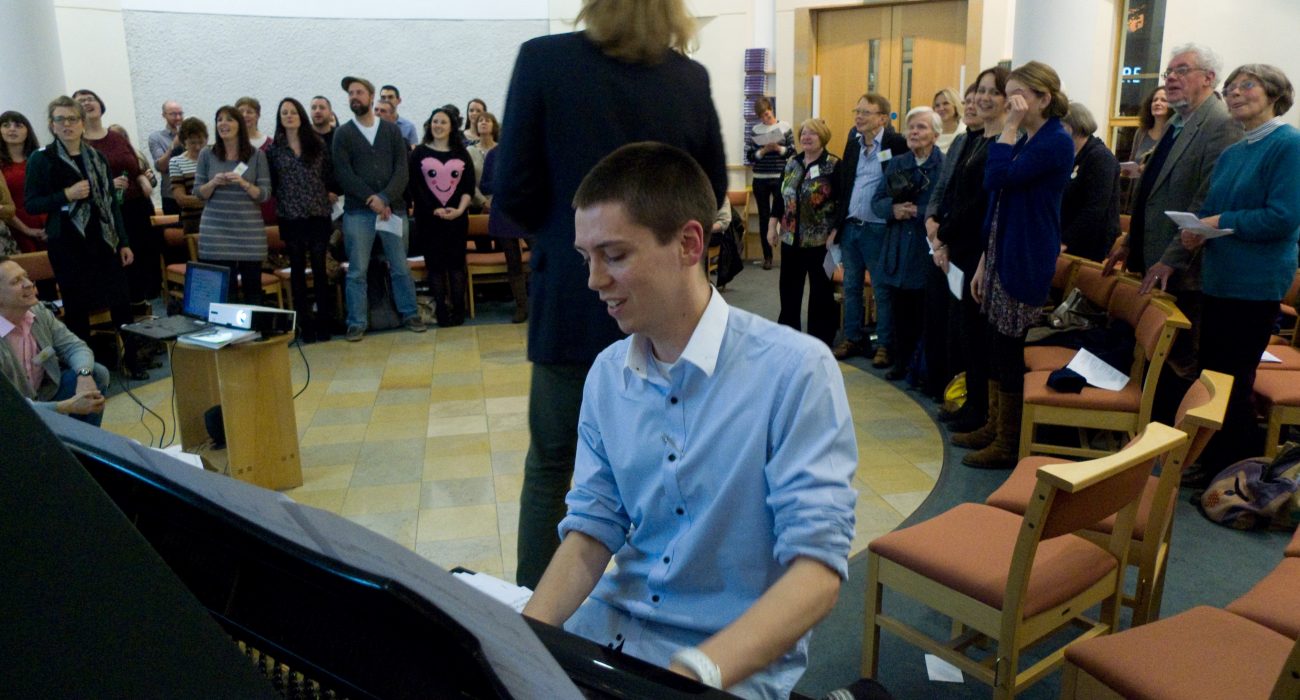 It’s a Wednesday night and I’m in a small room, whose walls are stacked with prayer books.  The people around me all seem to be in good spirits despite the miserable autumnal weather outside.

‘Hit it, Maestro!’ cries the church leader, sweeping his arms excitedly in to the air.  The opening strains of the first song begin to plonk from the piano. A joyful, upbeat number to which the congregation start to sway and clap, with smiles abounding and ripples of awkward laughter echoing around the room.

This is no ordinary church service. The hymn sheet makes no mention of ‘All things bright and beautiful’, or ‘Jerusalem’. We’re singing ‘Celebration’, by Kool and the Gang.

Growing up in a strongly Christian family, I’ve been to many Church services throughout my life. Some of these experiences have made me cynical and skeptical when it comes to organised beliefs and religion, yet I’m open to sincerity when I see it. I’ve seen a fair cross section of what you might experience in the contemporary Christian church. From believers screaming and collapsing as they are ‘touched by the spirit’ and vicious blazing rows between believers due to disagreements, to touching talks by severely disabled thalidomide victims, and altruistic types sacrificing their entire lives for the benefit of others less fortunate. But between the extremities of the two poles, there is always the one uniting feature: a belief in ‘God’.

This, however, was different. It was like decaffeinated coffee: the taste was very similar but you just know something is missing. Yet, unlike coffee, this service was not any worse off for it’s deficit. This church is part of a growing movement which describes itself as a ‘godless congregation that celebrates life’.

Manchester’s inaugural ‘Sunday Assembly’ met on the 30th October, at the Cross Street Unitarian chapel. If you’ve not yet come across the movement, it was the product of the comedians Sanderson Jones and Pippa Evans, who together launched the first Sunday Assembly in North London in order to ‘live better, help often, wonder more’. Since then, as they describe, it ‘went a bit viral’. The concept has now spread globally with Jones and Evans currently embarked upon a ‘40 dates and 40 nights’ missionary tour launching new Assemblies worldwide.

For the most part, the Assembly does mimic a conventional church service: congregational songs are sung, an address of sorts, a moment for quiet reflection is encouraged, a collection is taken. Yet the Assembly filters out the divisive issue of belief and religion, but emphasises the importance of community and fellowship.

As the service opened, anticipation created an excitable tension in the room lending great enthusiasm to the first ‘Hymn’. Whilst the spirit was there, charmingly the musicality certainly was not. After mumbling through the verses that no one knew and then hollering through the chorus, all seemed enthused and in high spirits. As one witty member of the congregation quipped ‘this is a bit like Karaoke!’. The next item on the order of service featured poetry from performance poet and writer Tony Walsh. He delivered his verses in a typically halting ‘poetic’ style, but I was put off by the fact that the poetry that had been chosen seemed to be loaded with sentiments such as ‘Learn the answers, teach the questions’, ‘sleep as long as you like, just be awake more’ or ‘everyday may end with Y, but should begin with Why not?’. On its own I’m sure the poetry carries its weight, but in this setting it risked teetering in to twee motivational truisms. As the poetry drew to a close, Colin Parry (of the charity Foundation for Peace) gave a short but moving speech about the death of his son in the IRA attack on Warrington in 1993. Inspiring as this speech could have been, Parry offered little depth about the events or their fallout, instead offering the opportunity to purchase a book about it.

After a rendition of Take That’s ‘Shine’, Sanderson Jones took to centre stage to offer the ‘address’. In keeping with the imbued theme of ‘beginnings’ he spoke for a short time about his personal experiences, confessing that he was someone who ‘failed’ often. But the atmosphere in the chapel became a little uncomfortable as he was humorously relayed a story of how he had once unwittingly adopted the first half of an IRA slogan (‘We only have to be lucky once – you will have to be lucky always’) as his attitude towards finding success in starting new ventures. It seemed as if Jones was torn between a new ‘churchlike’ leader figure, and his standup routine. I’m all for laughter in church (Indeed, I believe it would greatly benefit many a service), but it felt that any attempt towards any depth was cut short by the introduction of levity.

Whilst the mainstream media has coined the oxymoron ‘atheist church’, this is hardly a fair description of the proceedings. Many of those I spoke were not explicitly atheist and often came from slightly unconventional routes to spirituality – a young woman brought up in an Irish Protestant family, a Unitarian lay preacher,  a middle aged woman brought up in the Church of England, who moved through Buddhism and now identifies herself as a Quaker. The Sunday Assembly prides itself on a lack of doctrine or set texts, other than basic human existence. As a result, everyone is welcome. Celebrating ‘life’, is open to any one, and as their website states, at the Assembly they ‘don’t do supernatural, but we also won’t tell you you’re wrong if you do’.

But is the celebration of ‘life’ a suitable anchor to hold fast the movement? The Sunday Assembly is not the first such occurrence of such a movement, as has been highlighted in many articles in the surrounding hype. In an article in the Guardian, Nick Spencer (Director of studies at the Theos Think Tank) describes how similar movements appeared in the late 19th Century in response to a surge in atheism, but quickly disappeared again. “You need more than an absence to keep you together,” Spencer says, “You need a firm common purpose”.

It is potentially due to the fact that this was the first meeting, however, the service itself felt very light on actual content or depth, relying instead quite heavily on jokes and throw away ‘wisdom’ soundbites. Whilst this was by no means dull, it is questionable how much mileage remains in such a strategy, especially with nothing specific to bind the believers, bar their existence.

Towards the end of his sermon, and the close of the evening, Sanderson spoke of how, since starting the Assembly, many had come to him and Pippa expecting them to have all the answers. He remarked that ‘One of the main reasons I wanted to start the [the Sunday Assembly] was because I had so many questions’. This offered a refreshing alternative to most conventional, ‘mainstream’ churches or religions who draw people in with the dubious claim of having the answers, the truth of life, or a raison d’être.

Personally, I subscribe to the idea that religions are all doors to the same room, that there is no universal truth because your conception of ‘life’ depends greatly on your perspective and upbringing. The Sunday Assembly seems to acknowledge this attitude and celebrates the unknown, the sometimes confusing journey of life. It promises no greater truths, or insights, or deities, and it doesn’t attempt to offer them. They sum it up with the rather bittersweet ‘We are born from nothing and go to nothing. Let’s enjoy it together’. Though this first meeting was a little scarce when it came to depth and risked looking like a new platform for the founders comedy, this burgeoning community does offer an interesting network of open minded people, who have all approached the venture with welcoming hearts and outstanding Victoria sponge. Let’s hope that the joy of being alive is enough to unite them in the long run.

The next meeting of the Manchester Sunday Assembly will be at Victoria Baths on Hathersage Road (M13 0FE)  at 11am, December 8th. For more information visit ww.sundayassembly.com