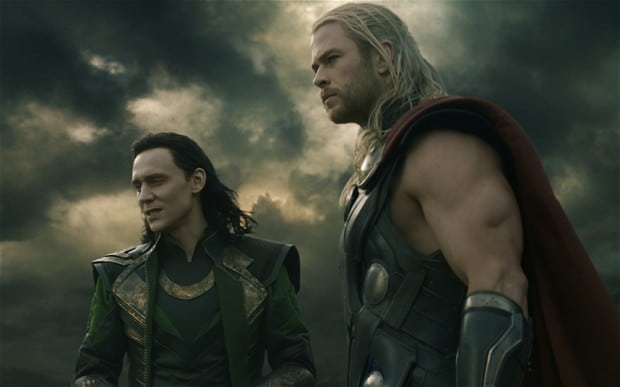 Walking out of the cinema, I had the realisation that Thor’s second outing was perhaps a contender for being the ‘marmite’ of modern cinema. Evident from the occasional excited fist-pumps of some cinema-goers combined with the few uninterested faces of the clock-watchers. I am afraid to say that I was in fact part of the latter group. Having found the first instalment a rather fun comic book romp, I couldn’t help but feel disappointed in its sequel.  This was due to my belief that the film offered little else but forced romantic subplots and a whole lot of visual brilliance and noise, thus, leaving little room for much (if any) character development.

The sequel takes place during the aftermath of the events that happened within The Avengers, with Loki (Tom Hiddleston) confined within Asgard’s dungeon and Jane (Natalie Portman) still longing to be in the arms of her heroic muscle man, since his two year absence. The films ‘focal’ plot, however, sees the introduction to Malekith (Christopher Eccleston) as the vengeful leader of a primordial race seeking to destroy the Nine Realms. Despite playing the films primal antagonist, Christopher Eccleston is frustratingly underused, with Chris Hemsworth’s chiselled torso possibly receiving more screen time. This leaves the plotline lacking the depth that was achieved in the first movie, where Tom Hiddeston skilfully managed to portray an antagonist, who was sympathetic and even likeable. However, even Loki’s character begins to lose his edge in the sequel, as the film’s creators can’t seem to decide on whether to make him a villain or not. Despite this, it is Hiddleston and Hemsworth’s palpable chemistry and charismatic performances that create the film’s most interesting, emotional and even laugh out loud comedic scenes.

In contrast to Thor and Loki’s relationship, the continued pairing of Hemsworth and Portman’s characters is another weakness of the movie. The lack of chemistry between the two makes their relationship hard to care for, whilst often detracting attention the main plotline. Despite taking up a lot of screen time, neither character seems to develop during their romance. This is especially obvious in the character of Jane, whom seems to have no interesting character traits of her own. This lack of independence transforms her character into a formulaic ‘damsel in distress’ and makes her a difficult character to like or relate to.

It is likely the visuals and sound effects of the film that the audience members will enjoy most. This is demonstrated by a scene presenting an invasion of Asgard complete with futuristic aircrafts flying, shooting and blowing up amid an attractively designed cityscape, slightly reminiscent of Star Wars. Yet, even more visually spectacular was a sequence showing the destruction of London. The fact that the battle scenes were held within Greenwich was also somewhat a more refreshing setting than the standard battlefield of upstate New York. Despite the cinematographic brilliance, these action sequences can sometimes go on for far too long, again allowing less screen time to focus on any character development.