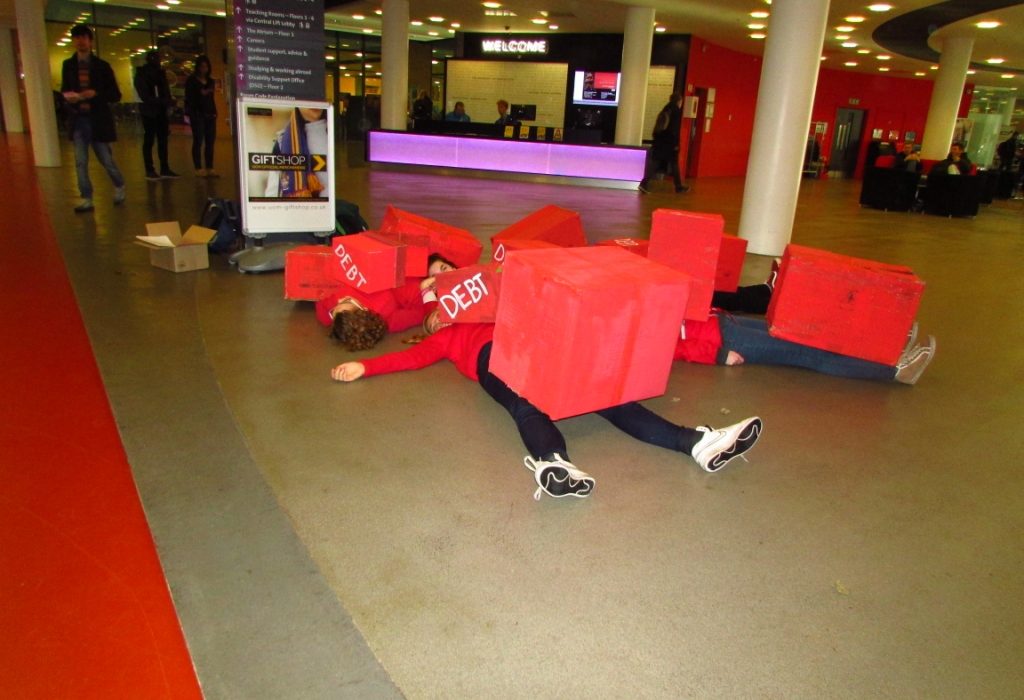 Students from the University of Manchester took part in a series of ‘debt-ins’ around the University campus last week as part of a ‘National Day of Action’ protesting the privatisation of the student loan book.

The students who took part in the protest on Wednesday 20th November morning lay on the floor under a pile of red boxes representing student debt. The protest began in University Place before moving on to Alan Gilbert Learning Commons, the Stopford Building, the Library and the Roscoe Building.

“Manchester Students’ Union and the Defend Our Education campaign group will continue to take action against government proposals to privatise student loans,” said Clifford Fleming, Campaigns and Citizenship Officer. “The privatisation of the student loan book will see debt sold to private organisations and in order for this deal to be profitable private organisations would either need to change the terms and conditions of payments (including raising interest rates) or for the deal to be subsidised by the UK taxpayer.”

Such a move would affect all students who graduated after 1998, meaning that current students would be faced with accumulating a higher debt than they believed they would when they agreed to the terms of their student loans.

Protests such as the one seen in Manchester took place in over twenty campuses all over the country, in a day of action co-ordinated by the Student Assembly Against Austerity.

Fiona Edwards, of the SAAA said, “We recognise that the privatisation of our student loans will cause interest rates to rise. We are demanding that they drop this outrageous policy immediately or expect further protests in the New Year.”

David Willetts, the Universities Minister, claims that privatisation of student loans will not lead to students having to pay back a greater amount of money, “There will be no change to the terms of repayment so students shouldn’t be affected by the privatisation of their loans.”

Harriet  Pugh, Undergraduate Humanities Faculty Representative and the primary organiser of Defend Our Education was critical of the move.

“It is almost certain that the privatisation of student debt will lead to an increase in the interest we have to pay back in the future. This affects ALL students who still have debt to repay, including those who have already taken out their loans.

“The government claims they are doing this as part of their plan to tackle national debt. What this really means, is that they are going to shift responsibility of student debt away from the government at the expense of graduates and, ultimately, (and ironically) the tax payer because the government is likely to have to subsidise the extra interest to private companies anyway.

As well as being a ridiculous financial decision, the privatisation of student debt is likely to have disastrous social consequences. It is already far more difficult for young people from ‘lower socio-economic backgrounds’ to go to university; you only have to look at the stats to work that one out.
This decision will only add to the financial burden of graduates and deter more people from getting the formal qualifications that open up so many opportunities and career prospects.”

Those at Defend Our Education are calling on students to contact their local MPS in an effort to persuade them not to sell the student loan book.

Those who would like to support the campaign can send an email to their local MP by visiting:
www.thestudentassembly.org.uk/lobbying-tools.html