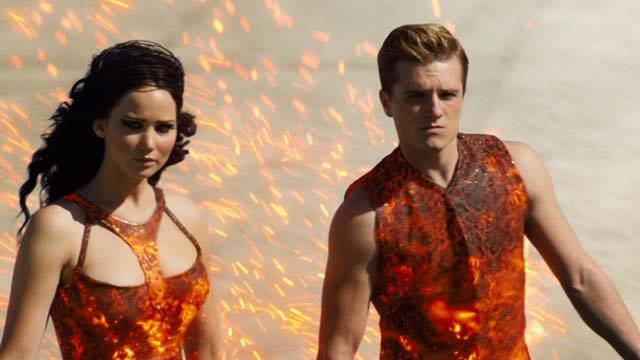 In Hollywood, 20 months is almost enough time for a popular series to be given a complete overhaul and a fresh lick of paint. And so with Catching Fire and its revisiting of exactly the same places and exactly the same events that were depicted in the first installment of the series, you would be forgiven for mistaking the film for a reboot. It’s a mistake that isn’t made easier by the purely business-orientated decision to place The Hunger Games at the beginning of the title, something altogether absent from the name of the novel on which it’s based.

Fortunately, and unlike many recent sequels, Catching Fire knows that “more of the same, but bigger” isn’t necessarily the key to success. Although the film may retread some of the steps taken by its predecessor, mainly, the selection of the Games’ candidates, the journey to the Capital and the pre-battle propaganda, the beginning of the film emphasises that something is certainly different as Katniss unwillingly sparks a rebellion.

In fact, it is in these early scenes that Catching Fire really excels as an exciting, political thriller. Once again, Jennifer Lawrence as Katniss is the heart and soul of the film, impressing us all as she convincingly portrays sadness, strength, hopefulness and vulnerability often all at the one time. One scene in particular, in which she goes toe-to-toe with President Snow epitomises all that is fantastic about the film: the cast is excellent, the script crackles and the emotional complexities and philosophical ideas that Catching Fire has to offer come to the forefront. This is an intelligent blockbuster.

It’s a shame, then, that the Games themselves are slightly disappointing. This time around, Katniss’ entrance into the arena is not quite as pulse-quickening or heart-racing. We’ve seen it all before: the Hawaiian tropical setting is refreshing but instantly recognisable; the breaking of the group of competitors into different factions with allegiances and friendships tested is far from original and there’s also an eerily familiar thick and mysterious fog to contend with. It seems as if the producers were borrowing directly from LOST. At one point, a character even says, “let’s get what we need and get off this damn island.”

In a perverse way, the older, more experienced competitors don’t appear as dangerous or frightening as the child-killers from the first film and so what made the first film so disturbing in entirely absent. That’s not to say that the events of the arena are not engaging or exciting. There are some well-executed action and chase scenes, but it is clear that the political backdrop to the Games and the growing rebellion have far more dramatic potential.

Ultimately, Catching Fire is a movie of two halves: one half intelligent political thriller and the other a straight-forward blockbuster. Although both succeed in providing entertaining viewing, it’s the first that sets the film apart from generic action fare. And with one of the most unsatisfying endings in movie history, it’s fortunate that going forward into next year’s sequels, it appears as if the people’s rebellion will take centre stage. The wait for next November may be unbearable for some, but it may certainly be worth it if future installments could well deliver on this exciting promise.