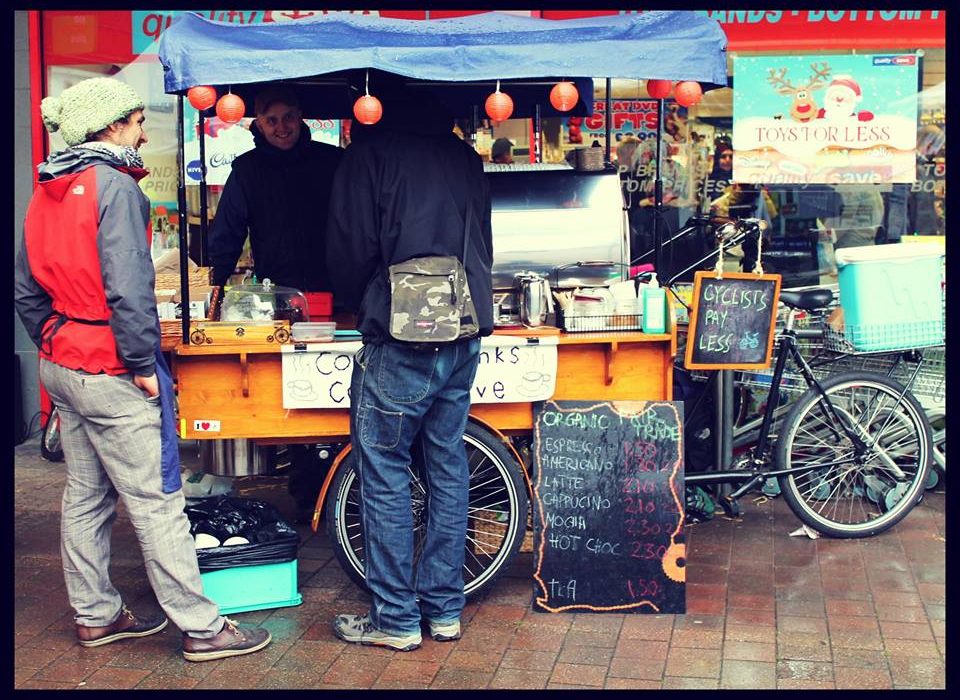 A coffee co-operative set up by University of Manchester graduates has been blocked from selling coffee near the campus – after the University filed an objection to Manchester City Council.

The Coffee Cranks Cooperative have been stopped from selling coffee from their purpose-built bicycle because it “conflicts with the University’s vision for the area”, said Diana Hampson, Director of Estates and Facilities, in the objection papers.

University graduate and Coffee Cranks Cooperative director, Zym Wysocki, says that the ruling shows there is “no justice” and that “the public have little say as to what’s going on in the public realm.”

In a hearing lasting over five hours on Thursday, Zym presented his case to the Council. Representing the University were legal professionals from Evershead, one of the world’s largest corporate law firms.

“I think that the result was pretty much predetermined from the start,” said Zym.

“In terms of resources available to both us and the University, it was skewed from the beginning,” he continued.

“I prepared for the hearing as best I could but I’ve never been in a hearing like that before.”

The Coffee Cranks Cooperative is a social enterprise selling ethically sourced tea, coffee and snacks from a cargo bike.

The bike was built in a disused garage behind the house of Zym and fellow University of Manchester graduate and Coffee Cranks Cooperative member Aga. Zym’s dad even flew over from Poland to give a helping hand.

But the University cited the “appearance of the vehicle”, in addition to “the congestion it would bring [and] the likelihood of increased litter” as some of the reasons for their objection.

A spokesperson for the University of Manchester said: “This is not just about Coffee Cranks but we would oppose any street trader as we feel it would detract from the appearance of the University.”

Zym, however, sees the presence of the coffee bike as a potential positive for the campus.

“Our presence there would actually improve the image of the University as being progressive, as looking into the future, as actually embracing what they preach,” he said.

Another objection was lodged for the Cooperative’s plans for a potential location a little further up the road, outside the Edinburgh bicycle cooperative.

“We would consider it desirable to raise the general quality of retail along the Corridor, to be fitting for such an important area,” read the complaint.

“We need to ensure that international visitors, investors and developers can see the real potential of the area to grow and this is currently being stifled by the presence of street traders.”

Zym was particularly disheartened by this claim.

“I’ve lived in this city for over eight years now, and now it seems to me that I don’t belong here, as if I’m an unwanted person,” he said.

“The streets are meant to be public, but they’re not public any more because somebody’s already made a grab on them.”

A University of Manchester spokesperson said that “the University supports its graduates in many ways but cannot support every venture”.

Despite their setbacks, the Coffee Cranks Cooperative will not be disappearing from campus completely – in fact, they have already been invited to provide coffee to striking lecturers on the picket line this week.

But the objections they faced may have changed Zym and Aga’s opinion of the University they graduated from.

“I don’t see how they live up to their acclaimed reputation of an institution that’s actually working with the local community,” said Zym. “They might boast of doing that but there’s little evidence of that.”

“I genuinely think they didn’t even bother to read [our application]…. because that’s the only way I can really still preserve the high reputation the University had with me.”