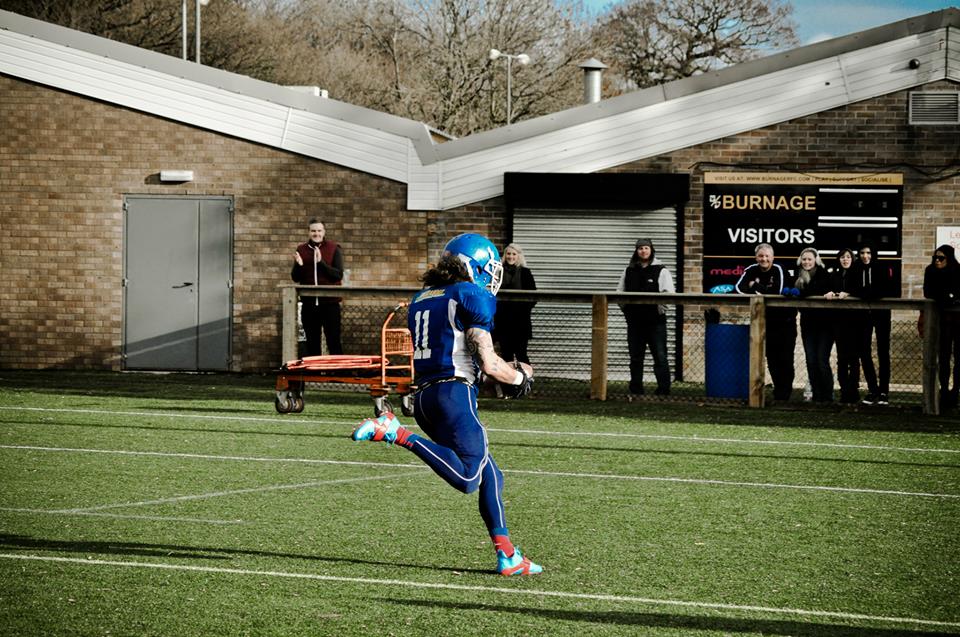 The University of Manchester Tyrants failed to capitalise in their recent varsity match against Manchester Metropolitan Eagles, losing 12-6 in what can be described as an exciting and hotly-contested affair at Burnage RFC.

The Eagles started the game brightly launching a 70-yard drive to within 10-yards of Manchester goal line. However, a superb Tyrants defence blocked all of the Eagles’ attempts to finish their drive with a touchdown, instead forcing them to accept a field goal at fourth-and-goal.

It was now a question of how the Tyrants would react to the intensity that the Eagles had demonstrated in their upbeat start. In most instances this season, the answer would have been the same – poorly. However, Tyrant running back Anthony Eiliazadeh, led by example, using a combination of speed and power to drive the ball into Eagle territory. He then finished the drive by accelerating around two Eagle defenders to run the ball in for a touchdown with ease on the far left hand side. Speaking to Eiliazadeh afterwards, he commended his wide receivers stating, “That score was all down to the wide receivers making their blocks, running it in was the easy part.” The Tyrants missed their field goal attempt, meaning they led by six points to three.

The second and third quarters provided no points other than a field goal for the Eagles which brought the game to a nervous six-six. From a defensive standpoint, the Tyrants had been excellent. When it looked like the Eagles were about to make a play, the defensive unit collectively stepped up. Defensive linemen Matt Scott claimed on the sidelines, “I must be on about twenty tackles.” Although this was an obvious over-exaggeration, it is comparably accurate with the total domination shown by the Tyrants’ defence.

The fourth quarter brought everything you can hope for in an American football match – drama. The Tyrants began the fourth quarter by taking the ball to the Eagles’ 10-yard line. A particular highlight of this drive was Tyrants quarterback Chris Payne’s superb throw to wide receiver Ben Fowles. The ball entered Fowles’ hands perfectly on the run for a gain of twenty yards.

Tyrants running back Lawrence Sarpong also capped a formidable drive, with his blistering run down the left hand side of the field, which consisted of him knocking over a few would-be tacklers in the process. But it was Sarpong’s ability to accelerate after the hit that really impressed spectators, with comparisons being made amongst the Tyrants’ sideline to NFL players such as Adrian Peterson and Marshawn Lynch.

However, the Tyrants could not seem to force their way over the line for a touchdown, prompting the their coach into implementing a risky fourth and goal attempt. Quarterback Payne, rounded pocket pressure from the Eagles’ defensive line, but unfortunately could not get the pass off. Eventually he was stopped on the Eagles’ four-yard line whilst scrambling for a touchdown himself.

The Eagles responded to the Tyrants’ long drive. Still finding it difficult to utilise their running game, the Eagles quarterback faked a handoff to his running back and played a screen pass out to his receiver on the left hand side for a gain of 30-yards.

Nevertheless, the Tyrants’ defence continued to dominate and cornerback Chris Walsh provided the biggest hit of the game on a man twice his size, forcing the Eagles to punt on fourth down. However, this backfired for the Tyrants’ as the Eagles made a superb punt to peg the Tyrants to their own five-yard line.

A time check revealed that less than two minutes remained in the game. With the scores tied at six points apiece, the Tyrants began their offensive drive needing to air the ball out to gain quick yards. Unfortunately the Eagles forced a pick-six – intercepting the ball and returning it from 20-yards out for the game-winning touchdown.

Offensively, it just wasn’t the Tyrants’ day. A few dropped catches and unfortunate interceptions at critical points of the game proved costly for the University of Manchester side.

Defensively, the Tyrants were incredible; they prevented the Eagles from scoring a single offensive touchdown, successfully limiting them to two field goals for six points. Defensive captain James Bowyer played exceptionally well at strong safety, making crucial tackles as the last man. Whilst Bowyer singled out Rufus Daw for having a great second-half, which included recovering an Eagles fumble.

Next up for the Tyrants is a trip to UCLAN Rams. With the Tyrants now 0-5, they will be entering the game as underdogs. Although if the recent Super bowl shows anything, it is that the tag of underdog does not really matter in American Football.

Were you at the American Football Varsity? Tweet your pictures to @mancunion_sport.