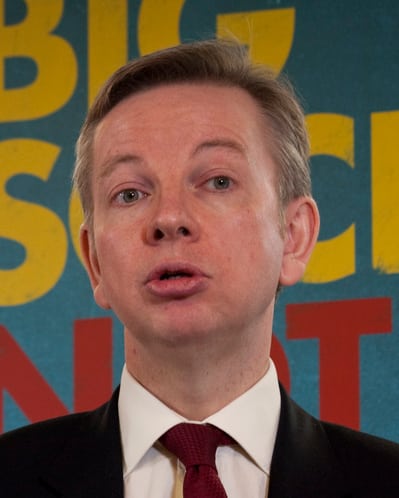 Michael Gove; why we need more women in politics

This week alone the Secretary of State for Education has announced that children at the age of five or six should be tested and he wants to extend the school day to 10 hours which would increase children’s stare out the window time by around 30 per cent.

It was announced recently that Gove would not renew the contract of Ofsted chair and Labour peer Sally Morgan, who was appointed by the coalition in 2011.  Gove’s motivations for this have been called in to question, and he stands accused of both politicising the education system and misogyny.  It has been reported that Gove plans to install a male Conservative party donor in Morgan’s place.  Harriet Harman, Labour’s deputy minister, remarked that it was ‘raining men’ in Cameron’s government, and a quick scan of the front benches (and the house in general) shows a proliferation of middle aged, upper class white men.

This isn’t the first time the party has been charged with sexist behaviour, which in the past has included lack of support for female parliamentary candidates and patronising language. However, this isn’t just a Conservative party issue.  Whilst 32 per cent of Labour’s MPs are female, only a paltry 12 per cent of the Liberal Democrats parliamentary party are women, compared with 16 per cent of Conservatives.  So why aren’t there more women in politics?

The world can still be quite sexist.  Why aren’t there more female CEOs, why aren’t female sports stars paid as much as men, why is a female comedian who doesn’t get a laugh not funny because she’s a woman, whereas a male comedian who doesn’t get a laugh just isn’t funny?  One can parse the reasons for the above in to lack of opportunity, need for the reform of maternity leave, and actually existing discrimination in the workplace as examples, but all these factors have a handy umbrella term called sexism.  Female politicians are often the target of sexism.

Their cleavage is discussed, as the Daily Telegraph did when they published a picture of Prime Minister’s question time and put a red ring around a female politician’s cleavage, asking , ‘Whose boobs are these?’  Whether you decide to have children or not is scrutinised, and Julia Gillard’s fitness to lead Australia was called in to question as she hadn’t any kids.  It means you take voice coaching lessons to lower your voice, which Margaret Thatcher did because her advisors feared she would come across as ‘shrill’.  My own home town MP warned Louise Mensch that, ‘A good wife doesn’t disagree with her master in public and a good little girl doesn’t lie’.  Sexism in politics stops women being judged on their merits and ability to do their job, and rather judges women on an idea of their immutable nature.  In sexism, a woman is and a man does.  This isn’t the whole story and it isn’t an all pervasive logic that refuses the entry of women in to politics at the door.  But it does put women under intense personal scrutiny that men do not face, which is unfair and unjust.

We need more women in politics and in powerful positions in the country.  If the country is run by those middle aged, upper class white men in terrible, terrible suits then it is likely that policy will serve the interests of those just like them as they make policy about what they know.  In diversifying representation, we can ensure that everyone’s voices are heard, and that the nature of politics does not stultify and stagnate from its insularity and isolation.  And this is exactly why we need a non-upper class, non-bloke opposition member or cross bencher in a position such as head of Ofsted, and in other positions of power.