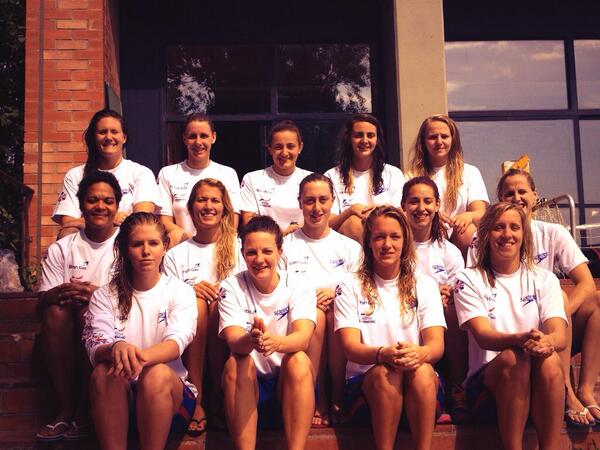 The Gb women's water-polo squad, who have had their funding cut just one year before the Rio Olympics.

Three University alumni have seemingly had their Olympic dreams dashed, as the women’s water-polo team they hoped to represent in Rio had its funding withdrawn by UK Sport.

Kathryn Fowler (Maths and Physics), Hazel Musgrove (Psychology) and Lisa Gibson (Biomedical Sciences) all represented the University, and currently play abroad with a view to securing the best possible preparation for Rio 2016.

In total, seven Olympic and Paralympic sports have had their funding withdrawn: basketball, synchronised swimming, water-polo and weightlifting in the Olympics, and 5-a-side football, goalball and wheelchair fencing in the Paralympics.

While in a statement UK Sport said their door ‘will not be shut permanently’ on any sport which has lost funding, the reasons cited for the withdrawal is the failure to demonstrate a realistic medal potential by the Tokyo games in 2020.

Kathryn Fowler, who is currently playing in Madrid for La Latina having deferred her masters said:

“I haven’t come to terms with it yet, I’m shocked and totally confused by their decision”.

Having been part of the BUCS Championship winning side of 2010/11 and subsequently club captain the following year, Kathryn’s Olympic dream was inspired by the performance of women’s water-polo team at the 2012 London games.

It is indeed an impressive story, seeing the GB team rise from 16th to as high as seventh in the European rankings in just six years.

The seeds of this success story were sewn as early as 2003, when the team were invited as a last minute replacement to the World Championships in Barcelona.

Losing heavily in the 15-16th placed play-off to France, the self-funded team were very much on the periphery of the World and even European water-polo scene.

The setup only appointed its first full-time coach in January 2007, and the improvement since has been marked – culminating in a quarter final loss to eventual silver medallists Spain at London 2012.

As the embers of the Olympic torch died out, the future for GB water-polo looked brighter than ever as 2012 came to a close.

In December 2012 UK Sport revealed their aim to put more money than ever before into the sport starting from May 2013, as a result of the gains made in previous years. The increase was the largest afforded to any Olympic sport.

However just nine months on, a full U-turn by UK Sport has seen them withdraw all funding from the team, leaving their plans in jeopardy.

Many in the water-polo set up will admit that the team is currently in a period of transition following the 2012 games, with retirements and coaching changes contributing to a difficult few months in which the team missed their ‘milestone target’ of 12th at the 2013 World Championships – albeit by just one place.

But quite how UK Sport can deem the sport to have medal winning potential in May 2013, but not in February 2014, is what has baffled most.

This is especially puzzling given the preparations in place to push for podium places in Rio and Tokyo.

Most of the current women’s team are playing abroad with UK Sport help in preparation for 2016, playing against many of the world’s best on a regular basis.

What’s more, the junior team finished 8th in September’s World Championships – the best performance by a women’s GB water-polo team on the world stage ever.

In the wake of London 2012, attendance at national trials increased for both men and women by between 60 and 70%.

The current junior crop would arguably be at the peak of their careers at Tokyo 2020, but it is now doubtful whether Team GB will even field a team.

The decision raises a number of issues, all of which question the Olympic legacy promised at the close of the 2012 games.

Firstly, it places a self-defeating focus upon winning medals, which unfairly punishes emerging sports such as water-polo. As Graeme Thompson told me:

“All sports go through an emerging stage. Even cycling and rowing did”.

The only way for women’s water-polo to win Olympic medals is with the continued support of UK Sport to allow the sport to develop.

This cut in funding now throws the entire future of the sport into question. Without a realistic possibility of Olympic participation, the attractiveness of the sport to would be players is greatly diminished.

The focus on medals is also unhealthy given the sheer unpredictability of sports such as water-polo.

The past two women’s water-polo gold medal winners, the USA (2012) and Holland (2008) were both ranked 5th in the world when they won gold.
UK Sport said it was a risk to continue to award women’s water-polo funding. I think the evidence shows that the risk is in withdrawing it.

Another issue is the message this withdrawal sends out to other young women with Olympic aspirations.

One of the central tenets of the Olympic legacy was to encourage participation. Without the role models of the likes who spurred on Kathryn, Hazel and Lisa, how do we expect this to happen?

“This is not a helpful message”, Graeme Thomson said.

How does UK Sport hope to encourage  young girls to take up sports such as water-polo, when they themselves do not deem them as having ‘medal potential’?

What too does this say about the future of Olympic team sports? With Basketball also having its funding withdrawn, the only team sport to continue to receive funding is Hockey. Men’s water-polo has also been a victim of funding cuts to team sports in recent years.

The evidence showing the benefits of participation in team sports is clear, and what’s more they are far more regularly practiced in school PE lessons.
The emphasis on the individual at the expense of the team sends out completely the wrong message to the generation the London games was meant to expire.

And finally, what do we say to those who have built their lives around the sport? The current water-polo crop playing abroad are mostly tied down to representing their teams until June. Their funding stops in May.

Similarly, the cost to the coaching staff of the funding withdrawal is equally severe. Graeme – who only took up his post in March 2013 – will be made redundant in May.

The water-polo team have already qualified for this summer’s European A Championships in Budapest – a distant dream some ten years ago. Now, it is doubtful as to whether they will attend.

Girls who have and continue to dedicate their lives to a sport and who dream of representing their country; thwarted. This isn’t a legacy, it is a national disgrace.

“It feels like we have been walked up to the top of the hill, and then dropped off”, Graeme said.

We are seeing our Olympic legacy, that we were supposed to be so proud of, hollowed out before our very eyes.

The talk of ‘widening participation’ can now be seen for what it truly is – a facade to disguise the fact that we continue to place success over support, and medals over development.

Nobody disputes that those sports courting public funding ought to be accountable. But to ostracise a sport which has come so far in so little time defies sense.

An appeal will soon be lodged with UK Sport, but in the meantime please take the time to sign the petition detailed on the back page.

A decision which impacts so many people so severely does not deserve to go unnoticed.

The petition to restore funding to the women’s water-polo team can be found at the link below: