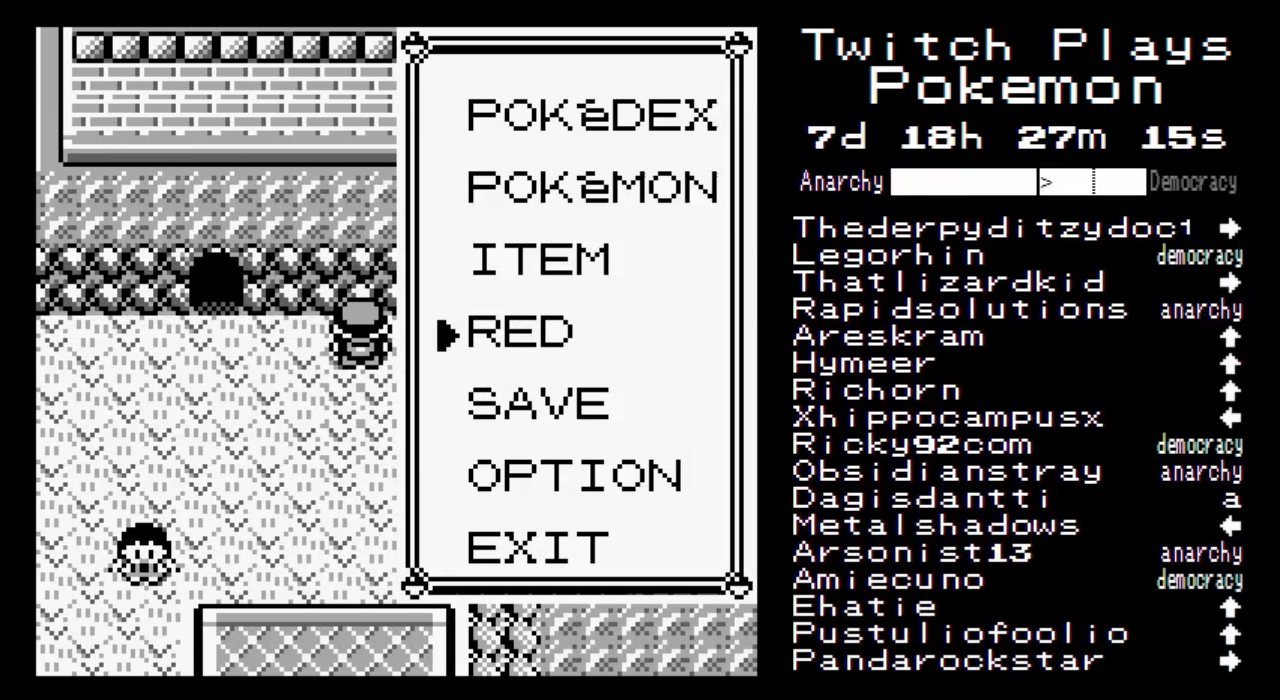 A bizarre social experiment has been taking place in the gaming world recently. The community of Twitch, a website that allows users to stream game related footage and have chat discussions alongside, have been desperately trying to play Pokémon together. One imaginative user has established a server that allows everyone to play the same game of Pokémon Red at the same time, simply by posting their button commands into the chat window. The chaos that has been unfolding ever since is unprecedented.

At time of writing, the game was over six full days in constant playtime. Over 75,000 users are logged on. They’re four gym badges down out of eight, a feat that I would’ve called impossible. The road has not been smooth. There have been triumphs, and heartbreak. The simple act of cutting down a bush using one of the game’s HM moves didn’t take place until over two days into the marathon.

Every single action that the poor Pokémon trainer must perform is an uphill battle. Not only does he have to compete with the many thousands of people all trying to do the same thing at once, but he must also put up with a similar number deliberately trying to make him do the wrong thing. Twitch also employs a 20+ second delay on the input, requiring people to plan ahead to execute their intentions, be they good or bad.

The obvious analogy to make would be to a thousand monkeys working on a thousand typewriters, but the monkeys would probably be doing a better job at Pokémon. So far, mischievous users have successfully released the team’s beloved Charmeleon, affectionately called “ABBBBBBK (“ (pronounced how it is spelt) and tossed away just about every important item they can. The un-tossable Helix fossil has become a thing of legend, practically worshipped by many who keep forcing the cursor onto it during battle to find out that, sure enough, Professor Oak won’t allow them to use it.

In an effort to bring order to the chaos, the creator introduced an Anarchy/Democracy dynamic. Players vote on how the game will be played and, once the new ideal has 75% of the vote, the game changes to that method. Anarchy, the most popular option, is what we already know and love. Under Democracy, the game changes. Input is only carried out every 10 seconds, with the most popular option in that span being performed. Needless to say, the hive mind did not appreciate Democracy, and quickly ousted it.

The player spent over 24 hours stuck in a labyrinthine Rocket building that I honestly struggle with when playing solo. The frustrating floor traps kept poor Red occupied for several hours. Unfortunately, as has become a common theme, as soon as he made progress the trusty users across the world managed to navigate the menus and use the Dig move to automatically escape the area. Some have tried to put the perpetrator into the storage PC, but others are afraid of a similar event to the one that saw the release of “ABBBBBBK (“ and “JLVWNNOOOO”.

In an interview with Polygon, the creator (who wishes to remain anonymous) said “I just wanted to put it up to see how people would respond. I put it together and put it up on a dedicated server all within a few days”. In a separate interview with BADatVIDEOGAMES, the Australian programmer behind the madness went on to say “Although I claim it is a social experiment I think that gives the false impression that it was planned or for a particular purpose, it’s just a fancy way of saying ‘I want to see what happens’.”

I can only assume that, barring some catastrophic server crash, this travesty will still be going at time of printing, and thoroughly encourage you to see how they’re doing. Hopefully they’ll have escaped the maze by that point.