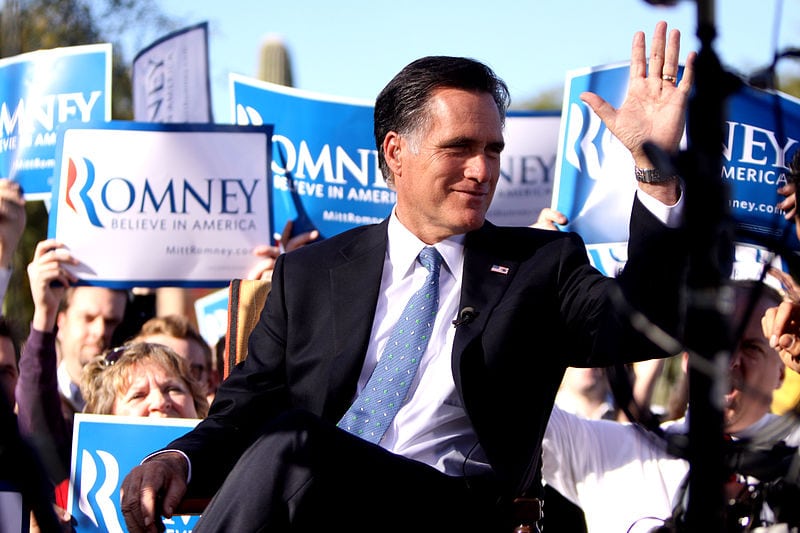 The Republican Party do not fare well in my political opinions and values, so you’d think that any individual representing them would be a political villain for me. However, it is Mitt Romney in particular who stood out at the 2012 US Presidential Election as an incredibly frustrating and contradictory candidate. His habit of flip-flopping and voicing of extreme views makes him my political villain.

The Republican Party in general were notoriously stubborn with their attempts to derail Obamacare, a piece of legislation designed to insure those who can’t afford healthcare, and to lower costs for middle class families (how can that be a bad thing?). However, Romney was one of the most hypocritical opponents. Having signed a very similar piece of healthcare reform as Governor of Massachusetts, declaring “the President’s copying that idea, I’m glad to hear that”, Romney later declared Obamacare “bad news” and threatened to repeal it “on day one” if elected President. Not only did Romney oppose a landmark bill designed to help the most vulnerable in society, he “invented Obamacare before he was against it” as Jay Leno humorously summed up.

Healthcare wasn’t the only inconsistency. Leading up to 2012, Mitt Romney had flip-flopped on almost every major issue, highlighted by Romney contradicting himself at different points in time over issues such as healthcare, abortion, economic stimulus and women’s rights. It wasn’t a case of him simply changing his mind; he was willing to become the “Massachusetts moderate” to be Governor of a liberal state, yet “severely conservative” (both labels are attributed to Romney himself) to gain Tea Party support and the Republican nomination in 2012. If we are to take one side of his flip-flops, he has (at some point) held pro-choice views on abortion, supported economic stimulus and pledged to support the auto-industry (which he later wished to “go bankrupt”). However, Romney lurched towards the right and was secretly videotaped accusing 47% of Americans as government-dependants who will always vote Democrat. His choice of Paul Ryan as running mate, a darling of the Tea Party with an aggressively conservative budget plan, further underlined his determination to appeal to anyone whom he thought could propel him to the White House. It clinched the Republican nomination, but not the Presidency.

On the rare occasions that Romney started to develop more convictions, they were often of an uncaring nature. Not only did he want a multi-trillion dollar tax cut for the wealthiest Americans and a return to Bush’s trickle-down economics, but he cheerfully noted ”I like to fire people” and ”I’m not concerned about the very poor. We have a safety net there”. To counter a question on pay equity, he crudely stated that he had had “binders full of women”, and the secret video tape of a fundraiser speech lead to this shocking outburst: “there are 47 percent of the people who will vote for the President [Obama] no matter what…who are dependent upon government, who believe that they are victims, who believe the government has a responsibility to care for them…My job is not to worry about those people”.
Mitt Romney is not my political villain just because he lurched to the right. I’m not a fan of Mrs Thatcher, but she was a conviction politician, and her stances were always unequivocal. Perhaps we can best sum up Mitt Romney with a quote from himself: “I’m not familiar precisely with what I said, but I’ll stand by what I said, whatever it was.”