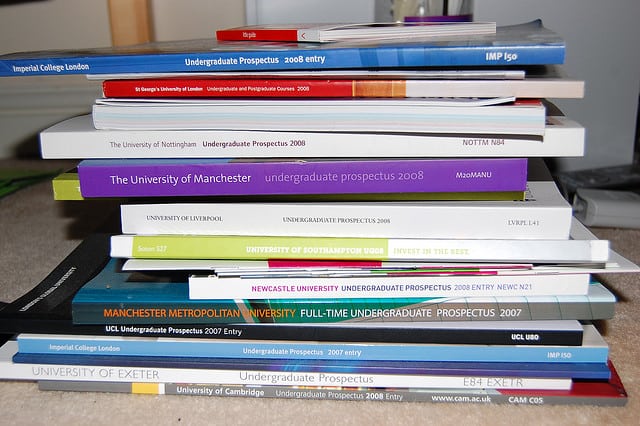 Prospectuses need more information on employment, income prospects and quality of teaching, according to the OFT. Photo: Balazs H @Flickr

The Office of Fair Trading has accused universities of failing to provide prospective students with enough information about their desired course, after a six-month investigation.

It has also warned that consumer protection laws may be being breached by universities hiking fees up in the middle of courses.

Chief Executive of the OFT Vivienne Dews said, “Our call for information has identified a number of issues which must be addressed if our universities are to deliver the best possible educational experience and the maximum benefit for the country.”

OFT’s report, published last week, highlighted that information such as income prospects, employment, and staff experience, was not sufficiently provided to prospective students.

It also recommended that the Competition and Markets Authority, the body that will in April succeed the OFT, launch a full inquiry into universities’ compliance with consumer law.

This comes alongside recent warnings that preventing a student from graduating due to library fines or similar debts are in breach of these laws.

The report comes after an investigation of how universities compete for applicants, and a proposal of a full examination of non-competitive practices between institutions, many of which charge the upper rate of £9,000 per year.

The OFT has “received no complaints or evidence” of price fixing or collusion, and stated that competition between universities was, overall, working well.

It also did not recommend a change to the rules that state prospective students may not apply to both Oxford and Cambridge, or to the limit of five universities on the UCAS application.

It did however, emphasise the need for transparent and accurate information from universities, to “persuade students to attend their course to secure funding.”

The OFT also raised concerns about “whether the regulatory system treats all higher education institutions in a fair and equitable manner.”

Christopher Snowdon, President of Universities UK, said it is “essential to ensure that we do not end up applying wholesale consumer protection rules to higher education in a way that undermines that [student-university] relationship.”