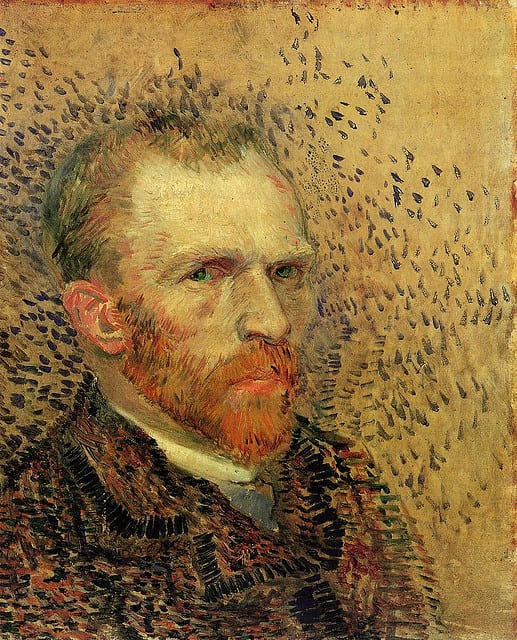 2. He sold only one of his paintings during his life and only became famous after his death in 1890. The Red Vineyard near Arles (La Vigne Rouge) was bought by Belgian artist and art collector Anna Boch after being displayed in Brussels just before Van Gogh’s death. It was sold then for 400 francs (about £50 in today’s money).The picture is now on display at the Pushkin Museum of Fine Art in Moscow.

3. Van Gogh painted one of his most famous works, Starry Night, while in a psychiatric asylum. He entered the asylum in Saint-Rémy-de-Provence on May 8th, 1889 after he chopped off part of his ear and was diagnosed with a form of epilepsy. As long as he remained stabled, the doctors allowed him to paint.

4. He was friends and lived with Paul Gauguin, another famous artist.

5. Vincent’s brother’s wife collected Vincent’s paintings and letters after his death and dedicated herself to getting his work the recognition it deserved.

6. Vincent shot himself in a wheat field in Auvers, France but did not die until two days later at the age of 37. He was sitting in a field which he has previously painted when he pulled out a revolver and shot himself in the torso, somewhere between the stomach and the heart. This was, however, not fatal and had to endure a gruelling two days of pain before he went into a coma and died on July 29th 1890.

7. Vincent’s brother Theo died six months after Vincent and is buried next to him in Auvers, France.

8. He was never married. He did however have a mistress, Sien Hoornik, a pregnant prostitute whom he painted many times.

9. He wrote over 800 letters in his life, mainly to his brother Theo, who financially supported van Gogh for most of his life.

10. He did not cut his whole ear off, only a small section of his ear lobe was cut off during an epileptic seizure with a razor.