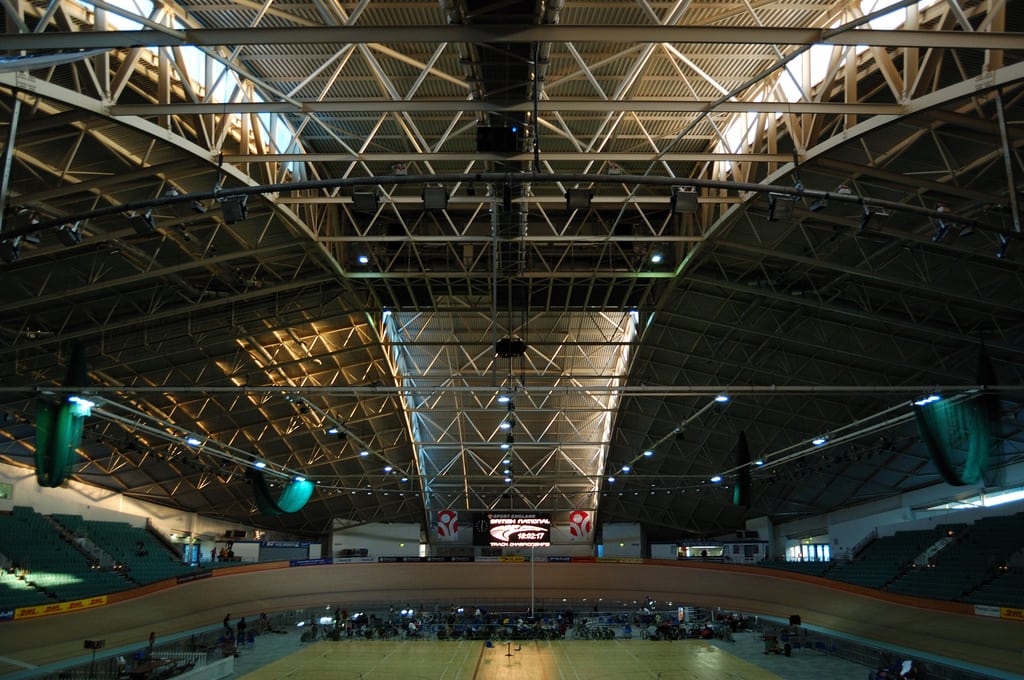 The Manchester Velodrome is one of the most impressive in the world. Photo: johnthescone @Flickr

There’s more to Manchester than United and City

You could be forgiven for thinking that Manchester is a city where the only sport is football, and the only teams are Manchester United and Manchester City.

However, Manchester is one of the leading sporting cities in the UK, and there is a lot more sport to be found if one scratches the surface and looks past the Premier League giants. Much of this sport will be found at the University of Manchester.

The growing strength of sport in Manchester began with the 2002 Commonwealth Games, when world-class facilities such as SportCity, the Armitage Centre and the Manchester Aquatics Centre were constructed. In the decade since, sport in the city has got stronger as a result of the Games’ legacy, and the turning over of these facilities to aspiring athletes.

At the university, there are loads of ways to get involved in sport, whether you have previously played competitively or want to try something new. The Athletics Union has 42 teams that compete in the British Universities and Colleges Sport system, and 36 of these teams offer beginners’ programmes. The University of Manchester finished tenth in 2013/14, and will be looking to improve upon that this year.

All of the AU teams will be at the Freshers’ Fair in the Students Union on Tuesday 16th and Wednesday 17th September, where information on how to sign up will be available.

Students can also take part in sport in inter-hall and inter-course competitions, which is a more casual environment than the BUCS competitions, but are still a great way to compete and keep fit. Student memberships at the Armitage, Sugden and Aquatics Centres are subsidised, while the Hall Sport programme run by the university provides free sports and activities every week. More information is available at http://www.sport.manchester.ac.uk/sport/hall/.

If watching and learning about sport is more for you, Manchester again provides a huge variety of opportunities to do this.

The National Football Museum is home to the world’s largest collection of football memorabilia, including Fulham’s Michael Jackson statue, Robbie Savage’s ponytail and the Football League’s original transfer window. It is based in the city centre, and admission is absolutely free—perfect for student budgets.

Cycling has become an increasingly prominent sport in the UK as a whole—and Manchester in particular. You need only observe the amount of people cycling down Oxford Road on a weekday morning to see how popular cycling is in Britain.

The British National Track Championships will be held at the National Cycling Centre at SportCity between the 26th and 28th September, with tickets costing just £11. The venue contains a state-of-the-art velodrome, which has been credited by many for the amazing success of British track cycling since the 2002 Commonwealth Games.

Excitement is guaranteed in track cycling, and this event is a great way to see the next generation of Brits looking to follow in the golden tyre tracks of Sir Chris Hoy and Victoria Pendleton.

For something completely different, head down to the Thunderdome in Oldham and watch the Northern Series Roller Derby. Greater Manchester is represented by the Rainy City Roller Girls, and they compete against the best teams from across the UK in fierce, full-contact sport.

The Roller Girls are a not-for-profit organisation, and all money made from ticket sales and membership fees goes back into the skating. The next slated bouts at the Thunderdome are on 27th September in a double header; with Leeds taking on Newcastle before the Rainy City girls take on the Middlesbrough Milk Rollers. Tickets cost just £8 in advance, and once you have the taste for roller derby you are sure to get addicted.

You can even get involved in this unique sport, with new skater training held at the Thunderdome on Mondays.

Manchester is one of the most sportingly diverse cities in the country. At the university and throughout the wider city, there are loads of ways to get involved in sport beyond shelling out up to £950 for a season ticket at one of the Premier League sides. Whether it is doing it yourself and representing your university, hall or course—or going to see something more unique—Manchester is the perfect place to have fun with sport.