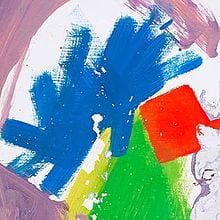 Album: Alt-J – This Is All Yours

Alt-J’s sophomore album was always going to be a challenge. The departure of member Gwil Sainsbury cast their future into doubt at the start of the year, and their hugely popular award winning debut, An Awesome Wave, was hailed as one of the albums of the decade. How could they possibly live up to it, especially one man down?

Their defiant response of a second album, This Is All Yours, does enough to silence the doubters, but perhaps won’t induce quite the level of delight as the first. However, this conceivably owes to a slight maturation in sound, so it’s not all bad. They haven’t quite let go of their pots ’n’ pans vibe, but neither are they living in the shadow of tracks such as ‘Breezeblocks’ and ‘Tessellate’, forging on and sounding more organic.

‘Intro’ begins a capella, lyrically nonsensical and minimalistic, before the layers build up to a sitar-laced, hypnotic banger of an instrumental. Then, as soon as they’ve got you going, they slow you right down again with ‘Arrival In Nara’, the first of a trilogy concerning the Japanese city. The bare first two minutes of a single soft guitar and piano is again sonically uncharacteristic, before the more energised but melancholy ‘Nara’. The song energises the album once again, but make what you will of the lyric “love is a pharaoh and he’s boning me.”

The trip continues with the more well-known ‘Every Other Freckle’ and the blues rock pastiche, ‘Left Hand Free’, before breaking back into geography with ‘Garden Of England’, ‘Choice Kingdom’ and ‘Warm Foothills’. These provide calming interludes either side of the first single, ‘Hunger Of The Pine’, controversially (yet ironically) sampling Miley Cyrus singing “I’m a female rebel.” While this lacks the idiosyncratic intensity of previous singles, misty electronica has a relaxing effect. Conversely, in ‘Bloodflood pt. II’, the lyrical themes of confrontation and aggression, matched by the instrumental, have impetus – if anything the vocal is more sinister for its melodic tenderness.

This Is All Yours is less overtly brash than its predecessor, reflected in the bittersweet final track, ‘Leaving Nara’, which rounds off the trilogy. It is arguably less distinctive than An Awesome Wave, and perhaps it won’t live as long in immediate memories, but this album still stands alone as an impressive piece.

Tags: Album, Alt-J, review, this is all yours