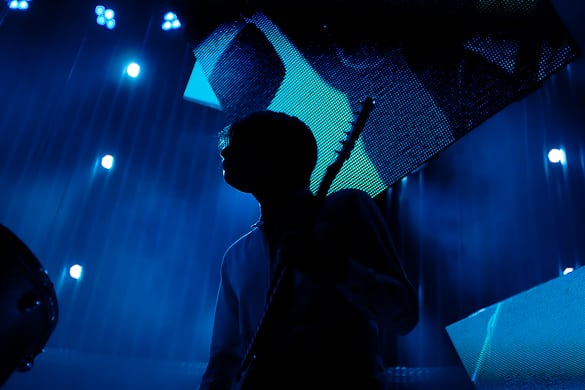 By nature, this concert drew a mixed bag. Cool-dad 6music listeners, die-hard Radiohead fans and classical music connoisseurs alike crammed into the Albert Hall, not knowing what to expect but drawn by the name on the ticket—Jonny Greenwood’s widespread appeal as guitarist of Radiohead is undeniable. It is easy to dismiss someone like him as a serious classical composer because of just this, but as the LCO dynamically reproduced some of the finest moments from his film scores such as ‘There Will Be Blood’, it was hard to ignore the versatility and emotional depth displayed in his writing.

It wasn’t just the Jonny Greenwood show though; other composers’ works featured just as much, the best of which was a gut-wrenchingly intense solo cello rendition of Michael Gordon’s ‘Industry’. Greenwood’s impressive playing of Steve Reich’s ‘Electric Counterpoint’ later on was also a performance to be savoured. The thrilling third movement of this wonderful minimalist piece was awe inspiring, and the Radiohead star’s skill as a player, not just a composer, really shone through.

Perhaps the most memorable moment for the audience, however, was when a web link appeared on the projector after the interval, just as the orchestra moved onto a slower Greenwood original. When you clicked the link it made a sound, you joined the performance and before long every smartphone was emitting twinkling sound effects. Not only a masterstroke of originality, it worked fantastically with the slow melancholy of the piece and this sort of forward thinking is what set the concert apart. It bridged the gap between a gig and a classical music event, and in my opinion that was its greatest success. That, and the fact that Greenwood made accessible the genre of contemporary classical music to a demographic which, under normal circumstances, wouldn’t have given it a second glance—quite an achievement.