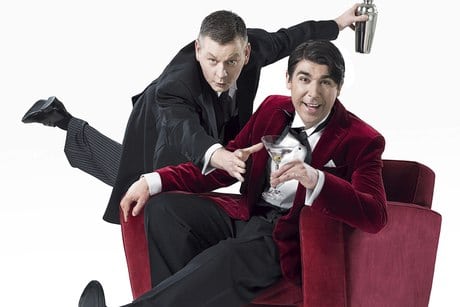 “There are always boring parts in a play” explains Wooster to the audience while changing his clothes behind a partition screen. This performance of Jeeves and Wooster in Perfect Nonsense at the Lowry certainly lacked them. The three performers in the roles of Bertie Wooster, an aristocratic fool with his faithful valet Jeeves and Seppings delivered a magnificent performance when they switched between characters, transformed the stage continuously and broke the fourth wall by interacting with the audience.

P. G. Wodehouse, the author of the popular “Jeeves” book series written from 1917 to 1966 , would have been delighted by the attention to detail that the actors incorporated in their performances. James Lance managed to portray the snotty Wooster as a likeable and clumsy fool that just tries his best to keep everyone happy around him and thereby creating more trouble that Jeeves has to sort out in his typically nonchalant way.

Especially astounding was the performance of Robert Goodale who co-wrote the play and performed the role of the senile butler Seppings, He switched seamlessly between three roles of Roderick Spode, Dahlia Travers and Constable Oates, and portrayed his characters with an astounding vocal range and poignant mannerism.

The highlights of the show were the costumes and sets designed by Alice Power. which initially seemed to be very simple, but then escalated into a major catalyst for even more jokes and character interaction. Stage properties where constantly added and transformed by the actors to move the narrative forward.

A wonderful moment ensued when Jeeves was forced to play two characters talking to each other in the same room. The problem was creatively solved by a costume consisting of a female and male half and by showing the respective side of the speaking character to the audience. This is only one of the examples of the creativity of the costume design.

The strength of the play was that theatre tropes and all of the possibilities on stage were used to create a wonderful performance. It was a play within a play, the fourth wall was perpetually broken and special effects, as far as they can be taken in theatre, constantly astonished the audience and were followed by repeated applauding, laughter and cheers throughout the play from the viewers. The atmosphere was literally buzzing.

Furthermore, the play was a celebration of nostalgia and very aware of it. As a student, it was easy to feel very young compared to the rest of the audience members and it was fascinating to observe the reactions of people who re-experienced the time when they either read the books or watched the highly recommendable ITV series with Hugh Laurie and Stephen Fry. When the curtain closed after a comedic Charleston performance of the actors and when the fulminating applause abated, it was clear that the Olivier Award for Best Comedy 2014 is completely justifiable.