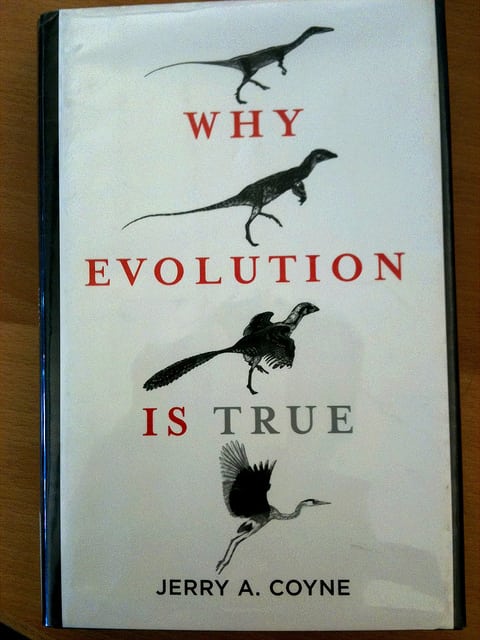 Review: Why Evolution is True by Jerry A. Coyne

Already from the first page the reader is thrown into the subject. The thread in the book is Darwinism, the modern theory of evolution, and the evidence for it. This is painstakingly illustrated by an endless stream of examples taken from around the world, enthusiastically urging the reader to fully and whole-heartedly embrace this theory. Parallel to this he compares evolution with the alternative theory: the thought of a creator. Despite all the evidence that evolution exists, it still fails to explain some essential features of the subject in question. This is where Coyne’s Achilles’ heel lurks, leaving the reader somewhat puzzled.

He does however hit it off rather well by trailing down Darwin’s road. I assure you that by the end of the book, the reader will be a pro when it comes to significant concepts such as natural selection, gradualism and the molecular clock. Logically, argument follows upon argument and the reasoning is easy to follow throughout the chapters.

Nevertheless, at one point in the book he brings up two classic examples that argue against natural selection; blood clotting and the complexity of the camera eye of vertebrates. Coyne makes an effort, using a good two-and-a-half pages, trying to explain the incredibly complex biochemical process which results in blood clotting. He mentions gene duplication as a plausible explanation and uses sea cucumbers as an example, just to finish off with: “After all, biochemical evolution is a field still in its infancy.”

In contrast, a more detailed and more digestible explanation is given to the complexity of the camera eye of vertebrates, which can now be explained by the process of natural selection after numerous experiments have been carried out. This is a splendid example of the scrutiny and tidiness that underlines every single word in this book. It is extremely well written and can be advantageous when read parallel to text books about evolution. No wonder I was recommended this book by my professor.

To summarise, despite the quality, authenticity and logical structure in this book, the non-stop flood of fossil records, experiments and extinct species was too much for my plate. It felt more like a text book than a novel. The book barely touches on how our genes are affected by environmental factors (epigenetics), and fails to explain some essential features of evolution, such as previously mentioned example of blood clotting. Nonetheless, if you wish to learn about all sorts of creatures, evolutionary concepts and Darwin’s ideas, this book could well become your best friend.