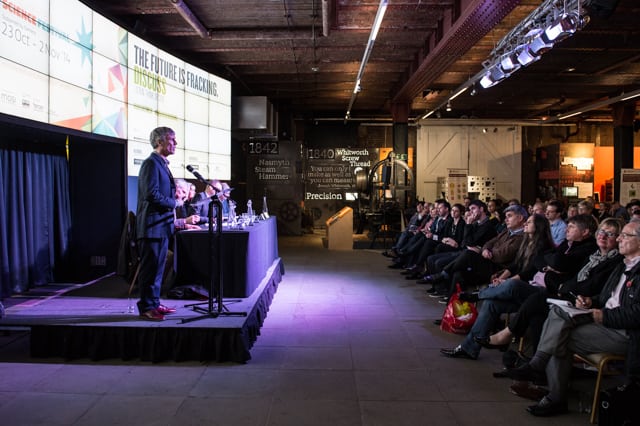 Bez presents his views to the audience. Photo: Discuss

Anti-fracking puns are plentiful, as are the arguments for and against the technique.

Advocates of fracking say that it could be a vital step in our shift towards cleaner, more efficient fuels, as well as creating thousands of new jobs. Those against it say that the potential environmental risks simply aren’t worth it. It certainly splits the general public.

However, a sizeable number of people remain unsure about fracking. It was with this in mind that the Museum of Science and Industry held a debate on the matter as part of the 2014 Manchester Science Festival.

Hosted by Discuss, the event saw a panel of four people tell an intrigued crowd about their views on fracking.

Before any discussion began, all members of the audience were asked to answer a simple question. Were they for fracking, against it, or did they simply not know? The results of this quick survey were interesting: one-third of the crowd stated that they supported the technique, whilst another third said that they opposed it.

The remaining third, which included me, declared that they were undecided on the matter.

The host then invited the panel to present their views. Claire Smith, President of Stay Blackpool, was the first to stand up and talk. A native of the town, she spoke of its decline over the past few decades. Although still a popular holiday resort, the town struggles to attract nearly as many people as it did during its heyday in the late 19th and early 20th century.

“Blackpool desperately needs a creative way of finding new investment,” emphasised a concerned Smith. In her eyes, fracking is that creative new way. Unemployment is very high in the town and opportunities are few and far between for young people.

She pointed to Aberdeen, the gateway to oil in the North Sea. Over 40 years after the first major find, the city still prospers thanks to these vast reserves.

The industry still supports nearly 50000 jobs locally and the two per cent unemployment rate is among the lowest in the country. Indeed, Aberdeen was recently voted the happiest city in the UK.

Smith spoke of the many opportunities and benefits that fracking could bring. 60000 new jobs could be created in the energy sector. The UK could enjoy nearly 50 years of energy security. She emphasised the point that a payment of £100000 per well would be committed to local communities affected by fracking.

Her final and perhaps most important point was that it would be senseless not to at least investigate extracting shale gas. Stating that some testing would be needed, she almost begged the crowd to see whether fracking can live up to its promises.

It was then time to hear from an opponent of fracking. Mark Berry, better known as Bez from the Happy Mondays, stood up and started by explaining how he had recently set up his own political party. The ethos behind his campaign at next year’s General Election will be “free energy, free food and free anything.”

He stated that he was frustrated at a lack of any real debate on the matter of fracking and questioned why no senior figure within the industry, or indeed the Government, has come out to defend it.

He views the exploitation of the alleged shale gas reserves in the North West as nothing more than typical corporate greed.

Bez expressed his concern that many fracking locations are situated on major agricultural sites. There are many horror stories flying around about water becoming contaminated by fracking and he stated that he was deeply worried that this water would still be used on these sites.

He also raised the issue of a failed well-head in Hull. It allegedly costs £25000 a day to keep it safe—all this before any fracking has even started!

Mike Bowman was the third member of the panel to speak. A professor of geology at the University of Manchester and a former exploration geologist for BP, he believes that fracking is a viable energy source for the UK but accepts that it is not the long term solution to the world’s energy crisis.

“This is a really tough decision,” was his opening statement. He emphasised that although we need to move away from fossils fuels, it’s not something that can just happen overnight. Their use will continue, but will have to be phased out gradually. “We will be dependent on hydrocarbons for the next few decades,” he stated.

He was critical of the oil industry, explaining that it has a poor exploration track record. He stated that we should be investing in renewable energy sources now, but that right now, we need something else.

It was almost as if he was selling shale gas as the “best of a bad bunch.” While acknowledging that it would still have a negative impact on the environment, he stressed that it was far cleaner than oil and needed to be used as a transition fuel.

Whereas Claire Smith had mentioned Aberdeen, Mike Bowman brought the United States into the equation. Fracking has been taking place there for years.

Not only that, but it has been performed “safely, securely and effectively,” according to Bowman. The shale gas agenda has transformed the country.

Bowman was quick to point out that implementing shale gas extraction here in the UK in a similar style to the US would not be the answer. “We should use US knowledge, but it must be tailored to the UK,” he stated.

His final point was similar to Claire Smith’s. He stressed that we must at least explore the possibility of fracking. “We must take advantage if it’s there,” he concluded.

The fourth and final member of the panel was Kevin Anderson, Deputy Director of the Tyndall Centre for Climate Change Research at the University of Manchester. His first statement was powerful: “I’d agree with everything Mike Bowman said, if it was 1990.”

It was back then that the issue of climate change was first raised. The disappointment in Anderson’s voice was palpable when he explained that humanity had chosen to ignore the early warning signs. He warned of the consequences should we continue to dismiss the problem.

He pointed out that 75 per cent of shale gas’ weight is carbon, meaning that vast quantities of carbon dioxide are produced when it is burnt. It might not be as bad as oil, but it’s certainly far more carbon-intensive than renewable energy sources or nuclear power.

However, while Anderson was adamant that shale gas should not be extracted in the UK, he wasn’t so quick to dismiss its use in other countries. He raised an interesting point that it could be used as a transition fuel in poorer parts of the world.

Although the Western world has been exploiting these fuels for generations, many less developed countries haven’t. Anderson said that it would be unfair to not allow poorer areas to ever benefit from hydrocarbons and suggested that in the short term, it could help them.

He concluded by stating that like coal, shale gas must remain underground. “We cannot burn shale gas and expect to meet our climate change requirements.”

It was then time to open up to the audience. Various issues were raised, particularly regarding the safety of the procedure. Mike Bowman was quick to stress that if performed properly, these dangers are not a concern.

The role of regulation was also discussed, as were a wide range of geopolitical questions.

After each member of the panel had presented their concluding views, the audience were once again asked for their views on fracking. This time the “not sure” option was unavailable.

So, did the public agree that the future is fracking? The answer was an overwhelming no. It was revealed that 72 per cent of the audience had voted against the motion.

This interesting and highly thought-provoking debate didn’t quite manage to change my views on fracking. I remain unsure about whether or not it should be instigated here in the UK.

However, I’m pleased that I was there to witness an intelligent topical debate about an issue that could shape the future of our country.