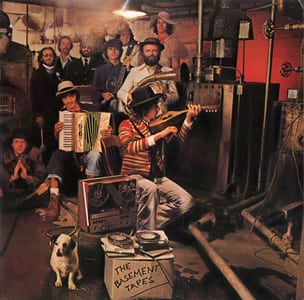 In the summer of 1967, in a Woodstock basement, Bob Dylan and his band, known then as the Hawks, recorded a few songs onto an old, borrowed tape recorder. Originally intended as a casual session, the fruits of which were only ever meant to be heard by a handful of people, they ended up creating an icon, a phenomenon, a wonderfully honest tribute to Americana and folk traditions; set against the backdrop of all the hippie nonsense of the day, this was, in essence, a glorious “fuck you, it’s over” to the proponents of psychedelia. The message only ever got out thanks to the relentless efforts of the bootleggers, who were determined that these songs would see the light of day; Dylan himself wasn’t particularly interested in that. It wasn’t until 1975 that his record label officially released anything from the sessions but, by then, the seeds had already been sown. In the intervening eight years, tapes were passed around, innumerable cover versions recorded and the songs had left an indelible mark on the culture of popular music. Somehow, without even being properly released, The Basement Tapes had unwittingly altered the entire course of rock music history.

Dylan had already done exactly that three times in the previous 24 months, with his trilogy of electric albums, beginning with 1965’s Bringing It All Back Home and Highway 61 Revisited, followed by Blonde on Blonde in 1966. To the dismay of many, he had deserted his folk roots in favour of a vicious combination of dizzying electric guitar riffs and bizarre, introspective surrealist poetry. Although doing so lifted pop music out of its dead-eyed slumber (without Highway 61, The Beatles would still have been singing two minute songs about meeting a girl at a disco and holding hands with her in 1969), it was an exhausting personal journey for Dylan, the culmination of which was the now famous interchange with the Manchester folk fan who shouted “Judas”. His response then, angrily ordering his band to “play it fucking loud”, typified his attitude at the time: one of uncompromising defiance in the face of his detractors.

But, by 1967, events had caught up with him: a motorcycle accident in ’66 prompted a period of introspection, a contemplation of how to stave off the burnout that was creeping up on him. Instead of heeding his own advice and playing it fucking loud, Dylan retreated to his Woodstock home and his folk roots and the result was The Basement Tapes, this curious collection of covers of traditional folk songs and roots rock inspired original compositions, ranging from the humorous to the melancholic to the downright absurd. This was Dylan putting a stop to everything he had started. This was Dylan, exhausted by both the praise and the criticism, by the “spokesman of a generation” tags, searching for some kind of salvation in the places he knew best, in the music of his childhood and early years, and in that rich vein of Americana he had always tapped into so assuredly.

Now, nearly 50 years later, we’ve got the unabridged version. Released last month as part of the ongoing ‘Bootleg Series’ project, The Basement Tapes Complete sheds some much-needed light on what really went on in that Woodstock basement, whilst simultaneously retaining the mystique, that strange enigmatic quality that made the sessions so iconic in the first place. The full version was released across 6 CDs (a 2 CD version has also been released for the more faint-hearted amongst us) and, at times, it can be truly baffling, but what is immediately striking is its unique sense of intimacy; here is Dylan at his most bare and revealing, a warts-and-all exploration of a musician at the very peak of his powers, and the inclusion of the aborted takes, the in-jokes and the light-hearted covers merely add weight to such a portrayal.

Trying to understand Dylan’s state of mind at this point, I am often reminded of a few lines from a song on 1970’s New Morning: “Build me a cabin in Utah/Marry me a wife, catch rainbow trout/Have a bunch of kids who call me, “Pa”/That must be what it’s all about.” Not only is he conjuring up the kinds of traditionalist imagery that inspire so much of The Basement Tapes, he seems to genuinely mean it too: he’s nobody’s ‘spokesman’, he’s just a guy who’s yearning for that simple, wholesome American life.

And yet, history refuses to let him be seen in that way. Like it or not, he was a spokesman, he was an icon, he was (and still is) the most important figure in the history of popular music. And, in a little twist of irony, what helped to cement his place as all of those things were perhaps the events that got him closest to his dream, the most meaningful incarnation of that simple American life he so desired: recording folk songs in a basement with his friends, while a dog sleeps on the floor next to him. It was not a cabin in Utah, but it was close enough.