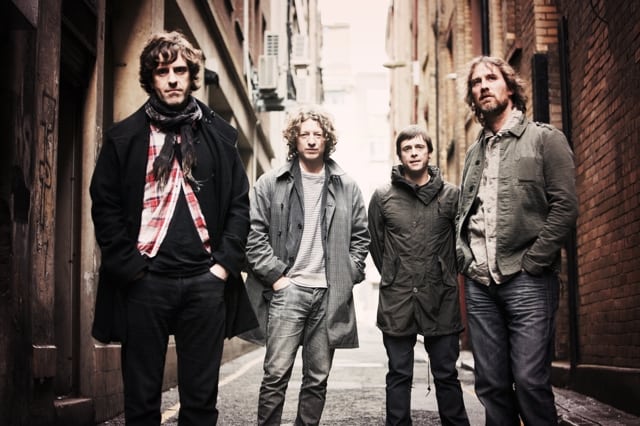 Liverpool’s John Power originally rose to prominence in the late Eighties as the bass player in The La’s, a band who proved to be as infamous as they were influential, releasing just one critically acclaimed album in their ten-year career. After leaving The La’s in 1991, Power went on to front the hugely successful Cast, whose back-to-basics guitar pop had a massive influence on British music in the nineties and were credited as one of the major driving forces in the Britpop movement; Noel Gallagher once famously described their live show as a “religious experience.” Fast-forward to today, and he has just finished an intimate solo acoustic tour of the UK, and has been working on a new album with the re-united Cast, slated for release next year. I spoke to Power ahead of the band’s December UK tour, which hits Manchester on the 21st.

“It’s a really grassroots kind of thing that we do when I go out with Jay [Lewis] with the acoustics,” Power says of his acoustic shows. “It’s generally off the beaten track, very small—150, 200 capacity—sort of venues, and it’s a real sort of troubadour vibe. Just you and the acoustics, and you’re not playing the major cities, and you’re going to places where they’re kind of half-disbelieving when you’re there—a lot of the time I have people coming up after the show being like, “how come you’re here?” There’s something in the romance of it, although I must say every now and again I look at Jay and say, “fucking hell, what the fuck are we doing here?” But generally, it’s a really good thing. It’s keeping it real with the guitars, singing ballads, singing a lot of the rootsy solo material and obviously the Cast tunes as well, and we just have some magnificent experiences. We travel light, we’re just driving the car, guitars in the boot, and we just turn up. It’s got a romantic, old-school sort of vibe to it, you know?”

These low-key acoustic dates are worlds apart from the larger-than-life spectacle Cast’s live sets are known to deliver, a contrast he says he enjoys: “It’ll be great fun hooking up with the lads, getting back on the road. You’ve got to remember that when Cast get together and play they’re one hell of a live band, with the dynamics between us now and everything. It’s very easy—I don’t mean that complacently, I mean it’s very loose and the music is very, very tight. We sing and play much better than probably we ever did in our heyday, and the songs have proven to be ageless and classic, and that’s a great feeling. It’s a great celebration and I get a lot of positive energy from it.”

Last month, ‘Baby Blue Eyes’, their first new material since 2012’s Troubled Times, was released online as a free download. The song itself is classic Cast—featuring layered guitars and Power’s vulnerable delivery—but with a more melancholy, almost folk twist. Talking about the song’s creation, he explains, “that folk element perhaps came from doing those acoustic shows. I do travel with my acoustic, I write a lot on the acoustic and I have that sort of history, or DNA, to me now as well. It’s not just a hard strum, there’s no electric rhythms on that track, and the song itself is a little bit life-weary, it’s a bit more experienced. It’s still got something of that hope within it, but it’s also not naïve—there’s a weight to it a bit more in the verses—and it’s a bit more seeing things for what they really are; maybe the paint is peeling off the façade and it ain’t all as novel as it used to be, or as innocent as it used to be.

“We’ve all lived and loved and lost, and we’re maybe seeing society for what it really is, but without giving up hope on our true nature and our true togetherness; it’s still there if you want it, but it’s tough out there, man… there’s war, there’s deceit, there’s liars and psychopaths running the fucking world. And we’re being told and conditioned, from a very early age, with crap TV and shit food, constantly, about what’s good. And it’s very difficult to see our true nature, to see clearly.”

With this new track having a more mature, perhaps slightly more cynical edge than the relentlessly optimistic anthems the band have been known for in the past, has his song-writing process changed at all along the way? Power thinks so, to a degree: “It’s changed, because I haven’t got the time to live the life I did when I was twenty years younger. I can’t just sit around all day smoking and strumming a guitar, my life has changed. But deep down I’m still longing for that never-ending song, and I try and tune into that and save that. And I’m seeing things, as I say, from a more life-weary viewpoint, you know? I’ve lived a lot more, but I still believe in the eternal nature of ourselves, it’s just that it’s a little bit sadder maybe, a little harder. It’s not for me to be spokesman of a generation who are twenty; I can maybe still inspire them, but I’m talking about whatever it is I see and how I see the world. But the process is still me and an acoustic guitar, still striving to write melodies and songs that connect with myself and everyone else who’s willing to listen.”

Cast’s last album Troubled Times was created with the help of the online music platform PledgeMusic, where fans are given an exclusive insight into the creation of bands’ output, as well as extra content and other benefits, in return for helping finance the production process. As a veteran, traditionalist performer, Power has seen the influence of the internet on the music industry first hand. “It’s had an effect on everything really, it’s not just music. But it’s changed so much from when we did our debut album [1995’s All Change], the internet’s had such an influence, and it’s such a way for people to interact with music and to put music out there. In a way it dilutes it, because there’s so much; anyone can put music out there now, so you’ve got to fish with those big industrial trawling nets, you know? Whereas in the old days you used to spot an old place in the water and you’d cast your net out there ‘cause you knew it would bring in the good fish. I think it’s such an influence today, everyone’s connected. You’re not even going to be able to put your bloody computer down soon, it’ll be attached to you. It just has an effect on every facet of life, hasn’t it?”

Between the rise of Spotify and the continuing tendency for music fans to illegally download their favourite artists’ work for free, the internet has had a game-changing effect on the way music is consumed, a fact that Power says isn’t lost on him: “Yeah, I know it’s an ongoing debate. To be honest with you now, there was a good piece I read the other day in the paper kind of saying, “well, everyone’s giving out their music for free now, and you can go and see them live.” But I suppose if you’re starting off, and you’ve got to pay for your own album, it’s very hard if you don’t sell any records to self-finance it further down the line. So it might be the end of a great band before they even mature, because record companies don’t get behind bands like they used to, in the sense of letting them develop.

“What do I think of the illegal downloading? I think, just like the illegal fucking bankers, it’s just a part of the industry now. Can I stop it, do I wish to stop it? It won’t be up to me, I don’t really take much notice of it; I’m not really a businessman, I just write music. But I think that everything is so available these days, I think that battle is more between the record industry and the people… are you ever gonna stop it? It’s the record company trying to keep hold of an industry that doesn’t really exist I imagine, because people don’t buy records and CDs these days, they just download. I suppose there are some people concerned that they’re not getting the royalties they’re due, which would be a concern of mine as well—because it’s our art, it’s our livelihood, it’s how we make a living.” Listening to him talk, you get the sense Power feels like these issues are something of a first world problem. “You know, there’s people fucking starving, and there’s war. We’re sending fucking drones across places and killing innocent children, so maybe we need to start worrying more about other people.”

With their string of hit singles in the mid-nineties such as ‘Alright’, ‘Beat Mama’ and ‘Walkaway’, Cast’s sound and overall retro-revivalist attitude had left an impression on many young bands of the era, and helped pave the way for the emerging Britpop scene. Looking back, I ask, are they proud of their legacy? “I think now I am proud, although not like patting myself on the back. Before Cast reformed three, four years ago, I didn’t touch any of the songs that I used to sing for about a decade. Now I sing them and I celebrate them, and I see the reaction in the audience, and it opens an ageless part of me and an ageless part of them; a song is ageless, you know? And my legacy isn’t over, but yeah, it’s nice to have impressed and to have left a footprint, although ‘I’m just about to put one down’ is the way I live my life.”

On the flipside of the coin, are there any acts in today’s musical climate he particularly respects? “I do catch a lot of stuff, I hear songs. People tell me about things. But I must honestly say to you, I just seem to sit around strumming the guitar, and I think maybe I’ve earned the right to do that—I said that to someone the other day. I know for a fact that with each generation there is, and will be, music out there that’s defining that generation. When you think of the way the world is, you’d think there’d be—I hope to God there is anyway—some serious music expressing a kind of simmering discontent. But you’d have to tell me if there is,” he admits, “I haven’t got my finger on the pulse.”

For a band that have achieved much already, what does the future hold? Power seems confident that Cast mark II, now entering the fifth year of their reformation, are here to stay. “I think now that Cast are together, they’ll always exist in one format or another, and that’s the idea behind why we’re gonna do some new recordings. When we play together now, it’s quite exceptional, we are quite a dynamic live band—and you can’t just do that, you need to have been on the road for years, to know each other inside out. We did this band for about eight, nine years, but now we’re back together we know and respect and dig each other’s musical input. So whilst I’m writing songs, obviously it’s a big deal to go “right, we’re gonna write a new album,” but I’ve got a lot of material, and when I go it alone I’ll be playing that, I’ll be passing ideas along,” he says, “and in the new year we’ll go into a studio and see what’s cooking.”