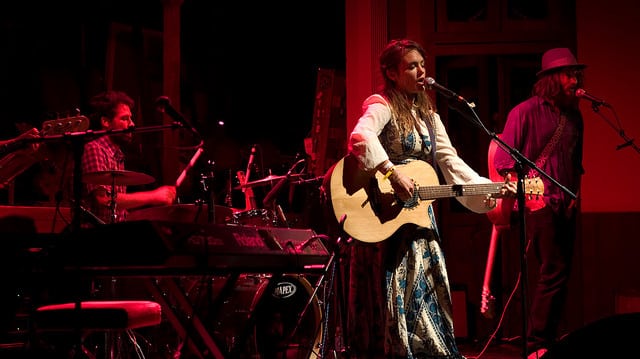 A very family orientated evening saw sister act The Staves open for Aussie brother and sister duo Angus & Julia Stone. The haunting vocals of The Staves are even more inconceivably beautiful live than on record. The term ‘folk’ is often misused for artists like George Ezra who play pop songs with acoustic guitars. But these three have the sort of vocal power and control that physically stops you in your tracks, combined with woody acoustic guitars and clever lyrics, their sound harks back to the golden years of folk. Their down to earth, dry humour between songs was an unexpected contrast to their music and made it sound even more ethereal. These three are definitely ones to watch but, perhaps, not ones to follow on stage.

After the striking vocals of The Staves the scratchy, babyish tone of Julia’s singing was more than a little abrasive and incredibly repetitive. While easier on the ear, the lyrics and song themes also have this dully repetitive quality. I imagine their cover of ‘You’re The One That I Want’ (yes, the cheesy theme from Greece) is supposed to be cool and subversive, an unexpectedly edgy twist on everyone’s childhood favourite, but I found it cringe inducing and it dragged on for far too long. Although I did admittedly look around and see a few older faces in the crowd bobbing up and down happily.

This is followed up by another twee cover of ‘Girls Just Wanna Have Fun’ and when a few songs later they announce  they’ll be playing a cover of The National, my plus-one leans over and asks “wait, haven’t they all been covers?”. This does seem to be the theme of the evening. However ‘Santa Monica Dream’ is a memorable closing note to the show. Angus’s deeper tones chime in to finish Julia’s lines nicely.