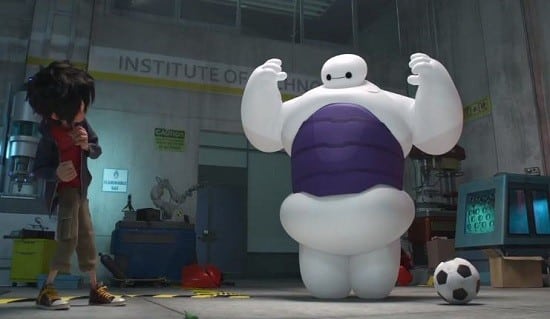 With its investment into the Marvel studios in 2009, Disney’s first attempt at sparkling up a Marvel comic has been anticipated for a while. With Big Hero 6 it has now finally reached the screens near you. Set in ‘San Fransokyo’, a colourful fusion of San Francisco and Tokyo that seems strongly reminiscent of Bladerunner’s Los Angeles, the story sets off in the gloomy surroundings of an illegal robot fighting ring and sees Tadashi Hamada rescuing his little brother Hiro (conveniently the hero of the story) from trouble. Unhappy about Hiro’s leisurely activities, Tadashi tries to convince him to give up ‘bot-fighting’ in favour of ‘nerd school’, which is crowned with success when Hiro is introduced to his brother’s latest invention: a distinctly huggable, self-inflatable medical care assistant resembling a puffier version of the Michelin man called Baymax. To get accepted into robotics college, Hiro invents so-called ‘micro-bots’, tiny robots which can assemble into any imaginable shape through the power of the mind. When a fire breaks out at the exhibition venue, Tadashi tries to rescue his professor and finds a sudden and unexpected end in the flames.

Devastated, Hiro is close to giving up on life when he coincidentally reawakens Baymax, who draws his attention to activities of the supposedly destroyed micro-bots. It turns out Hiro’s invention got stolen and is being abused by a masked stranger. With the help of an upgraded Baymax and the rest of the saucily named robotics nerd-squad from the robotics lab (Wasabi, Go Go, Honey Lemon and Fred—someone had to come up with the names), Hiro resorts to pinning down the evil to revenge his brother’s death. After changing into their superhero gear, the six friends commence their marvel(lous) adventure.

Based on the lesser known comic of the same name, Big Hero 6 allowed for enough creative scope to perform a successful Disneyfication of the material, which is evident in character conceptualisations and motivations alike. Contrary to our expectations of the robot central to a comic adaptation, health care robot Baymax has an unprecedented potential to be of service and value to the public. This offers a platform for comedy and Baymax’s punchlines have a very respectable hit-rate. Painstakingly slow, moving, and clumsy, one could assume his most dangerous weapon to be suffocation by extended hugging. While a point of reference to other recent comic book adaptations is successfully established through the mise en scene, the strength of the film lies within its story arc’s constant reliance on humanity often lacking its thematic siblings. Enemies are not purely evil and the motivation for villainous behaviour is consistently linked to emotional struggles. Through Baymax, robots are portrayed as helpful assistants rather than uncontrollable and dangerous machines. The human individual behind them is stressed, evoking a peaceful cooperation rather than reciprocal exploitation of man and machine. In a crucial scene the robot acts as a reminder of humanitarian values when Hiro is in danger of forgetting them.

Furthermore, the recurrent theme of loss creates a subplot about emotional responses that remins in contrast to the stereotypical coldness pre-eminent in the superhero genre. In spite of some moments of Disney tackiness, the film altogether manages to avoid a turn towards banality. However, the necessity of making up for its dark edges by throwing in some splashes of rainbow colour remains questionable. Nonetheless this is a charming take on a Marvel comic enjoyable regardless of age. On a scale from one to ten, how would I rate this cinematic experience? : “I am satisfied with my care.”