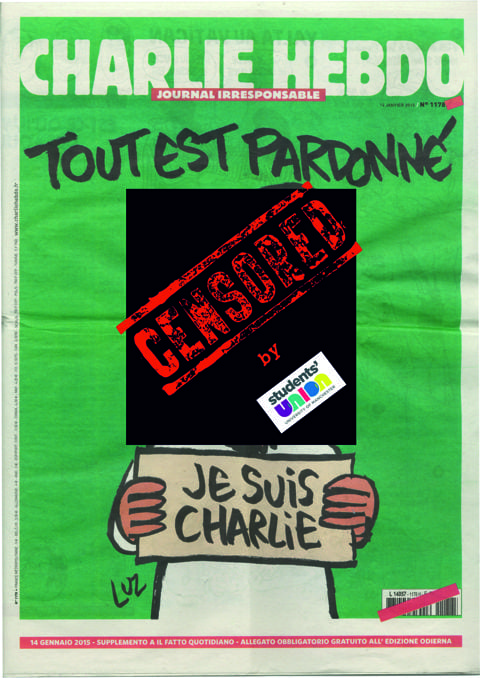 The image that was allowed to be presented at the Refreshers' Fair. Photo: University of Manchester Free Speech and Secular Society

The hypocrisies of censorship

At the Refreshers’ Fair last week, the Free Speech and Secular Society (FSS) was restricted by the Students’ Union from showing the Charlie Hebdo magazine. The reasons for this centred around the importance of maintaining a non-threatening environment for returning and new students. The intellectual dishonesty and moral vacuousness of this response offended me. However it did not make me feel threatened. Why would it? Just because I didn’t like what was happening it didn’t mean I was threatened.

A further reason was given regarding the need to ensure all students felt welcome. However it could not be the case that the Union acted so as to maintain a welcoming environment. If it was, then why was Domino’s Pizza allowed to park front-and-centre handing out free slices of pepperoni pizza? Surely by Students’ Union logic such an act would encroach upon the sensitivities of the vegetarian student?

Not a valid comparison, you may say. But think about it for a second. On the one hand, you have the satirical portrayal of a historical figure worshipped by many as God’s last messenger. On the other, you have the slaughter of innocent animals in order to hand out freebies to students. Is one really objectively worse than the other? Both vegetarianism and religious belief are life choices that are of varying degrees of importance to their adherents. Why should the sensitivities of the latter be prioritised over those of the former?

Suppose the prioritisation of a welcoming atmosphere really was the salient issue. It is worthwhile taking a minute to consider the implications of this precedent. Think of the possible effect it would have on the Marxist society. Some Eastern European students might have lost family members to Marxism-motivated brutality. Are they not just as entitled to feel uncomfortable when they walk past a stall with Lenin’s face on show? Cries from the Palestinian society of “free Palestine” would have to be restricted. So too would the Israeli flag in the Jewish Society stall. Both constitute an unwelcoming atmosphere for certain students, and thus via this newly adopted method would be rendered viable for censorship. The UKIP society would certainly be banned outright.

The most bitingly ironic thing of them all, though, is the effect that such a policy would have on religious societies, many of which treat the very nature of homosexuals as sinful, or at least condemn the form of love that they practise as being an affront to God. No amount of cognitive gymnastics can posit the discomfort of homosexual students here as being any less valid than the discomfort felt by other groups—at least not without making some morally repugnant value judgement regarding homosexuality.

Here we see how the comical fruition of the precedent set comes full circle. A decision taken to maintain the welcoming atmosphere on behalf of a religious minority will almost certainly lead to censorship of them. Doesn’t sound very welcoming, does it?

One can forgive the Students’ Union for covering its back like this. But did they really have to? What has been so insulting (not threatening) about the reaction to the Charlie Hebdo cartoons is the notion that it offended 1.2 billion Muslims. There is something rather insidious about this. “You have offended 1.2 billion people.” Every single one? One wonders what extensive polling was conducted to come up with such a conclusion. It is no coincidence that the number is so often stressed. It is the implicit suggestion that some people are not capable of having their beliefs challenged.

I reject this notion outright. It is intellectually absurd, not to mention offensive, to project such an excessively homogenised image onto such a diverse group of people. That is exactly what the Students’ Union is doing by taking pre-emptive and collective offence. The fact that some members of the Islamic society approached us and expressed their displeasure at our censorship serves to highlight the insulting narrative that is so unfairly perpetuated by actions such as this.

For the sake of a thought experiment, let us go along with the absurdity that all 1.2 billion of the world’s Muslims act as a homogeneous group. That they share some sort of telepathic connection that binds them together in reflexive rage (if this isn’t offensive, I don’t know what is). Should this matter? If the issue at hand is one of principle then obviously not. The number of people offended could be one, or a million, or even a billion. The principle is the principle, and not contingent upon numerical circumstances. The Students’ Union should bear this in mind the next time they wish to take pre-emptive offence.