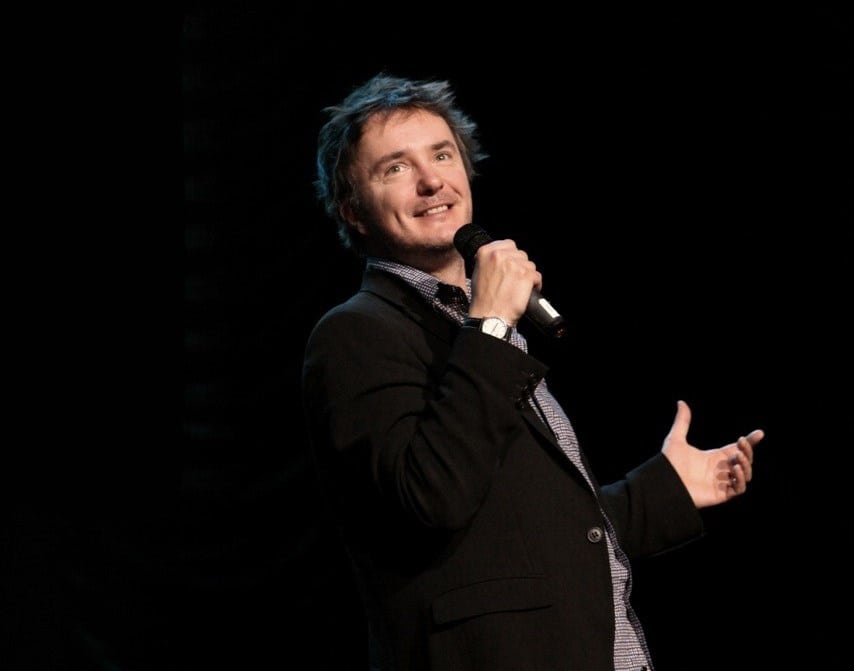 Dylan Moran is not only a comedian who started his career at the age of 20, but also starred in several well known films such as Notting Hill and Shaun of the Dead. When not touring all over the world and being declared “the greatest comedian, living or dead,” by French newspapers, he lives in Edinburgh with his wife and two children. The Mancunion talked to him about his music taste, his perception of comedy and how the countries he has encountered on his tours have changed his perspective on comedy.

The obligatory question in the beginning—what do you think of Manchester?
I really like Manchester, I’ve been in Manchester a lot of times, I performed in the dancehouse. I had a really good time there and Manchester people are really friendly. It’s weird because I go up and down the country, it’s hard to remember a particular place.

You’ve mentioned in other interviews that you enjoy Manchester music, especially Joy Division.
As a teenager, I listened a lot to the Bootleg Vinyl LP. Sometimes, they were made from concerts and I was completely obsessed with Joy Division when I was fifteen. So I had all of their bootleg stuff on vinyl and I had the band before they were Joy Division called Warsaw, I had their EP which was quite good. I was amazed by them as a fifteen-year old in the country. But I never saw them live, I only saw New Order live.

Does the music you listen to influence you when you’re writing your shows?
I do like listen to music sometimes. It can be very helpful, especially if you don’t want to be too aware of what you’re doing. Because you’re not overthinking what you and I sometimes think of stand up because a lot of stage talk is better, I find anyway, when you play around with different ways rather than to do something that you’re actually doing. It can sometimes freeze you when you think too much about everything. When you’ve got too many ideas and can’t concentrate on them, it sort of helps to organise how to do it rather than to do what you’re doing.

What does normally keep you on track when you’ve got too many ideas for a show?
It is actually quite tricky, you know, because in the end, it’s sort of a surrender, you have to give in to one of them. If you’re constantly trying to find the best idea, it’s like playing chess against yourself because you’re trying to do the next move, but you can skip over the unnecessary moves. Sometimes what happens is that you go directly into a voice, a character voice or a piece of dialogue. You have to stop thinking, that’s the key, you have to stop thinking. Pure rationality is not going to get you there. Even as a mathematician you have to dream and let your mind wander, you have to let go.

How did your perception of comedy change over time?
When I was young, I didn’t analyse or think about comedy. I don’t analyse it too much now either, but I think just being older and watching people talk in a room, at dinner parties or at weddings. What you’re doing is all tribal stuff, you’re sharing stuff with a group, just like one monkey is communicating with another monkey. That’s really it.

Your comedy often exposes people’s beliefs or strong convictions, such as vegetarianism or catholicism in Ireland. What do you believe in or what gives you strength?
I believe in a lot of things. Community and shared values and taking your stance for what you believe in. Wherever you’re from in the world and wherever you go, you have to have a belief in something. As humans, we’re believing machines, believing factories.

Do people often confuse your stage personality with your real personality?
Probably. I don’t worry about it too much. I don’t examine too closely how that works because that would be overthinking it again.

What do you do before you go on stage?
Well, it depends, sometimes I worry or think about it too much. I don’t worry about it, but I try to remember everything and that usually doesn’t work. I usually don’t remember everything I want to remember anyway. Sometimes the best thing is to ignore it and just go on a walk and then suddenly be on stage and you know, all comes out.

Did performing in different countries change the way you perceive comedy?
Absolutely. When I’m in a different country, I try to know a little where I am. I really enjoyed my show in Lithuania, where I just came from. Going into other countries changes my experience on everything. All of your assumptions about other people change and you’re forced into engaging with people you really have to try to understand the people. I always talk to them about who they are and why they are that certain way. It makes you look at what’s going on around you and changes your perception