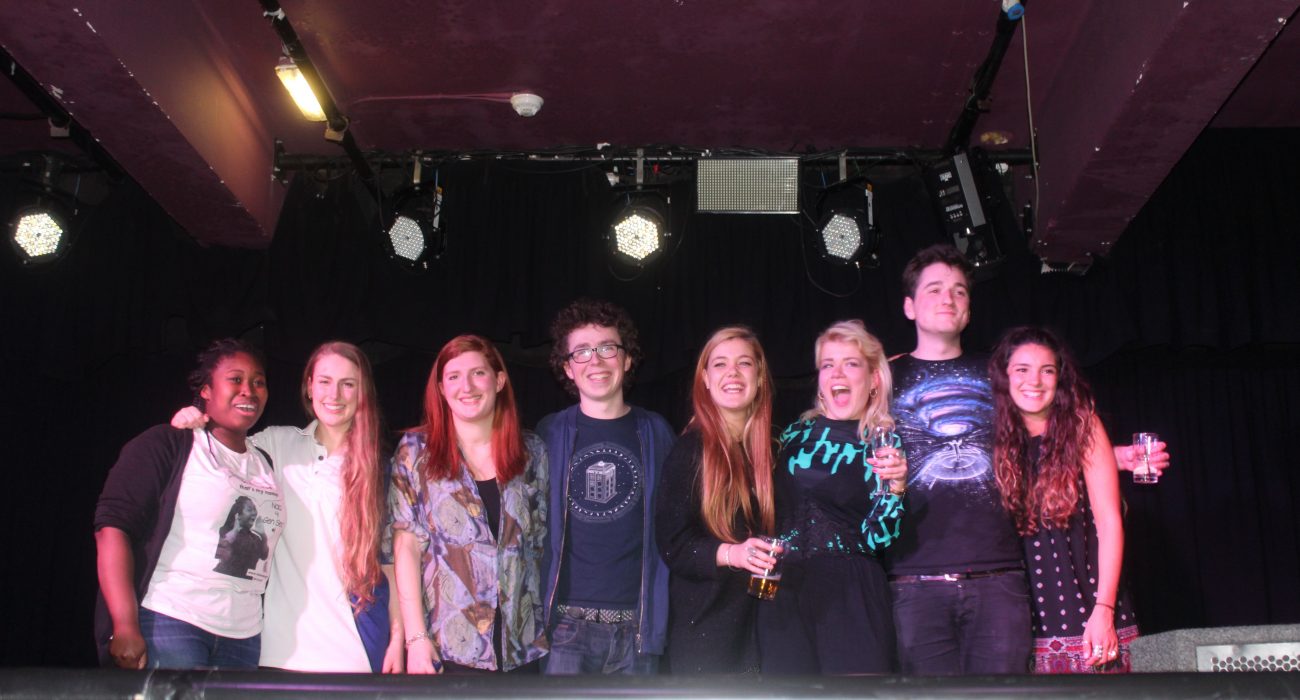 The 2015/16 Executive Committee. Photo: The Mancunion

In an elections campaign which saw the highest turnout of voters in any Union election since records began, Naa Acquah has been elected General Secretary, becoming the first female BME General Secretary of Manchester Students’ Union.

Announcements of the results of the Students’ Union elections took place on Thursday evening, and saw the re-election of three officers.

2014/15 General Secretary Charlie Cook introduced proceedings, thanking the Union staff, the candidates and the voters, who made it the largest ever.

The announcements were somewhat delayed after the 2-hour postponed closing time, which was announced after technical faults in the voting system.

Naa Acquah will take up the position of General Secretary after a race that took the highest absolute number of votes for the position since it was created in 1974, or before, when it was President.

She cried as she announced to the crowd, “any promise I have ever made, I will fulfil them!”

Speaking to The Mancunion, Naa added: “To my knowledge, I’m the first ever black female Gen Sec at this university, and I want things to really shake up. Every single thing everyone voted for, I’m going to make sure it happens!

Joel Smith will return as Activities and Development Officer next year, and Jess Lishak will resume her role as Women’s Officer.

Joel told The Mancunion, “I think it’s an absolutely fantastic turnout. I’m really excited by the new Exec team. I do have some big names [lined up] for future Pangaeas, but I do not care to disclose at this stage the headliners.”

Jess said she was excited by “the first ever black woman Gen Sec of Manchester Students’ Union, I think the whole team is really exciting, and I can’t wait to see what we do. Six out of eight [on the team are female] again, we’re continuing a strong trend, so I’m very happy.”

Harriet Pugh, formerly Education Officer, was elected Community Officer. She said: “I’m really excited, really proud and happy I’ve been elected again. I’m really surprised at some of the team, and that’s going to take a while to sink in but I think we’ll work it out. It’ll be nice, I’m really excited to work with a new team.”

At 9704, the turnout for voting for the Activities and Development Officer was the highest number of votes ever cast for any position, at any Union, ever.

The first winner to be announced on the night was Natasha Maria Brooks, who takes up the position of Diversity Officer after seven rounds of vote-counting. She, however, had nothing to say about her victory.

Hannah McCarthy was elected Campaigns and Citizenship Officer. Speaking afterwards, Hannah said: “It’s just incredible, I’m so so grateful, and I feel genuinely privileged to have been a part of the biggest Students’ Union election in the history of UK universities.”

Lucy Hallam will be Wellbeing Officer, and Michael Spence will be Education Officer. Spence added, “[I feel] absolutely amazing, I just can’t believe that happened. I put in so much work over the last few weeks for this campaign and for it to pay off like this… I feel like I’m living a dream.”