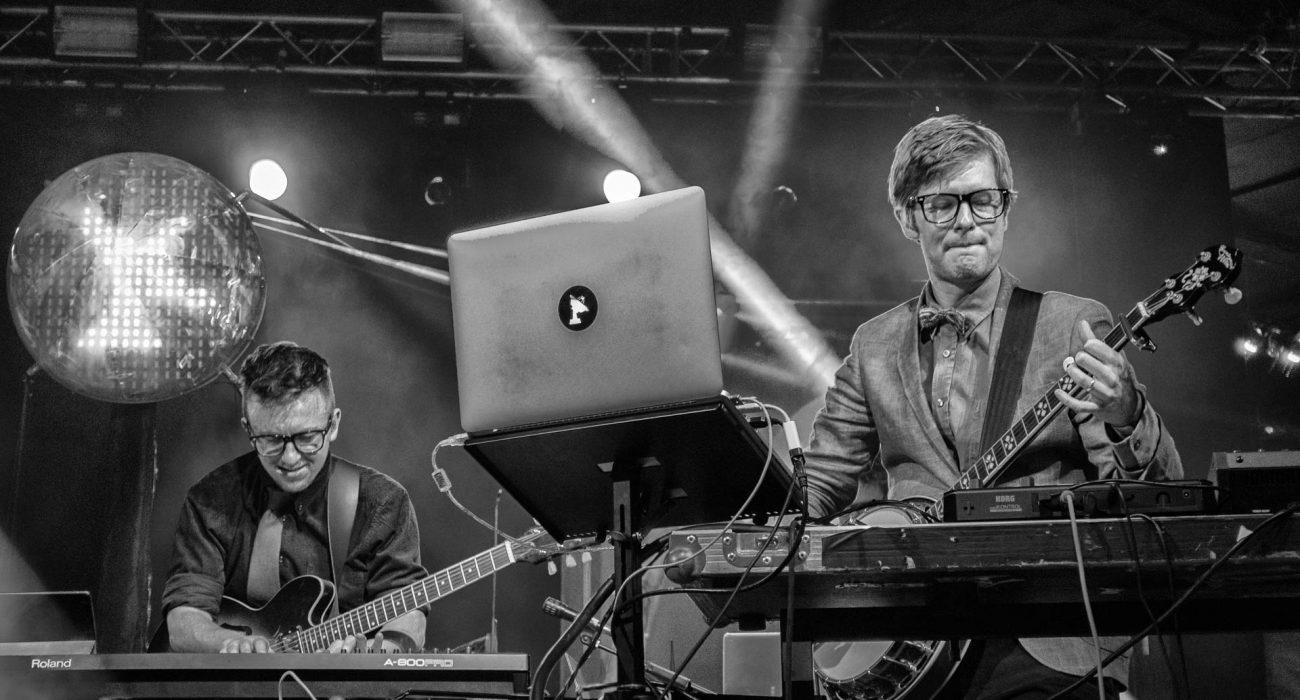 Public Service Broadcasting, a duo who have rejected conventional band techniques to create a musical concept that is entirely their own. Utilising the power of sampling, they have reduced the conventional four-man band of vocals, guitar, bass and drums down to two, with the drums coming from Wigglesworth and the rest from a sample board operated by J. Willgoose, Esq. The ‘vocals’ come from the sample board in the form of snippets of dialogue from old films and public service broadcasts. The instruments (including a welcomed portion of banjo) are all written and recorded by the two musicians but confined to a soundboard when live.

This unusual style was born when front man J. Willgoose reached a point in which he felt he had missed the boat to become a player in the music industry. He had experimented with producing his own music for several years and, from this, drew the idea of sampling old movies. As the concept grew he took to performing his music in pubs, using nothing more than a sampling board. It’s through this that he found Wigglesworth to get onto the drums and the two formed Public Service Broadcasting. The band has been rising up to fame over the past five years, most recently playing their largest show at the O2 Arena in London supporting The Kaiser Chiefs. As Willgoose recalls, “it was good, it’s always an eye opener playing much bigger shows than you’re used to and we’re never going to play the O2 so it was an experience—I think we came across alright. It was really interesting above all.” However, the stage would probably be the only thing that these two acts share with The Kaiser Chiefs, their brand of indie rock juxtaposing Public Service Broadcasting’s original style of futuristic art rock.

The band would also be the first to point out that they differ due to a lack of what they describe as a “charismatic front man.” Instead of relying upon a “Ricky Wilson” up front, revving up the crowd, they use their own unorthodox techniques. Many bands would count this as a loss but Public Service Broadcasting are a band that play to their strengths. Where some bands have frontmen they use visuals and soundboards to create a unique live experience. Rather than talking to the audience Willgoose will instead create messages for the crowd on his soundboard. “It’s a way of turning a weakness, the lack of any onstage charisma, into a strength and do something not very many other people are doing. I’ve never been particularly shy when speaking in terms of when we do radio shows; I don’t try and do that with the samples but live it seems to work really well.”

This unorthodox style doesn’t stop there. During live performances the band will employ matching visuals to the words from their samples and both don 70s style suits and personas. Unsurprisingly J. Willgoose and Wigglesworth aren’t the names on their birth certificates. They are the conception of J. Willgoose contemplating what the visual aesthetic of a band relying on public service broadcasts for samples should be. To Willgoose these broadcasts conjure up images of 70s BBC broadcasters reading the news headlines on tube televisions. The name changes and personas are a further layer added to provide a visual element for the audience to buy into.

Concepts are a key element in this band. Their first EP The War Room (surprisingly) focused on the subject of war. Drawing on the large pool of public broadcast dating from both world wars. The same has given them inspiration for their newly released album The Race for Space (surprisingly) drawing from the space race. The new album samples the same influences that have given the band their individual sound, though they have tried to move away from the krautrock label that has been bestowed upon them. This is due to Willgoose trying to move away from the labels that he sees as being loosely thrown at the band. “You write one song with krautrock influences and everyone starts describing you as a krautrock band.” They have also dropped the famous banjo that perked up their first album. This is done to remove any perception of using such an instrument in a gimmicky way (though don’t worry, it does have one guest appearance on the new album).

Public Service Broadcasting are a refreshing reminder that bands can still come up with exciting and original ideas that sound completely different to anything we’ve heard before. And though they don’t believe that they’ll be up there playing the O2 one day, they are doing something even better—expanding the boundaries of what music can do, altering our perceptions of what music can be. At the very least, they’re worth a listen, just to hear something you have not heard before.