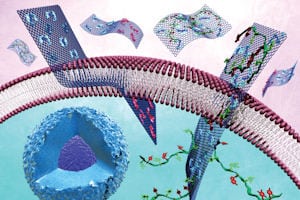 The world’s thinnest material, graphene, discovered by two University of Manchester physicists, has been shown to be effective against the growth of cancer stem cells (CSCs).

This was demonstrated by a team of researchers led by Prof. Michael Lisanti and Dr. Aravind Vijayaraghavan at the Manchester Centre for Cellular Metabolism, a group in the university’s Institute of Cancer Sciences.

Graphene oxide, a derivative of graphene, was originally known to have biomedical applications due to the non-toxic nature of graphene and its ability to work at a cellular level.

Dr Vijayaraghavan said: “Graphene oxide is stable in water and has shown potential in biomedical applications. It can readily enter or attach to the surface of cells, making it a candidate for targeted drug delivery.

“In this work, surprisingly, it’s the graphene oxide itself that has been shown to be an effective anti-cancer drug.”

More amazingly, whilst being completely harmless to other cells in the body, the molecule itself shows anti-cancer properties. Nano-flakes of graphene prevent CSCs forming clusters of cancerous cells, known as the tumour-sphere.

CSCs are incredibly difficult to target as current treatments, such as radiotherapy or chemotherapy, only kill the ‘bulk’ cancer cells, leaving the cancer stem cells unaffected. These cancer stem cells are responsible for metastasis, the spreading of cancer within the body, which accounts for 90 per cent of cancer mortalities.

Graphene oxide has shown that it could be used effectively to prevent tumours of CSCs growing in the body without any detrimental effects to other cells.

This suggests it could be effective against many other types of cancer, if not all. The magic of the graphene oxide nano-flakes lies in their ability to block processes that occur at the surface of the cells, the cell membrane. The researchers have suggested that an overall better clinical outcome may be delivered if graphene were to be used with the existing cancer treatments.

At this stage, further clinical trials and tests must be done in order to implement this as a medical treatment. It’s a long way to the cure for cancer but this may have been a crucial step forward.