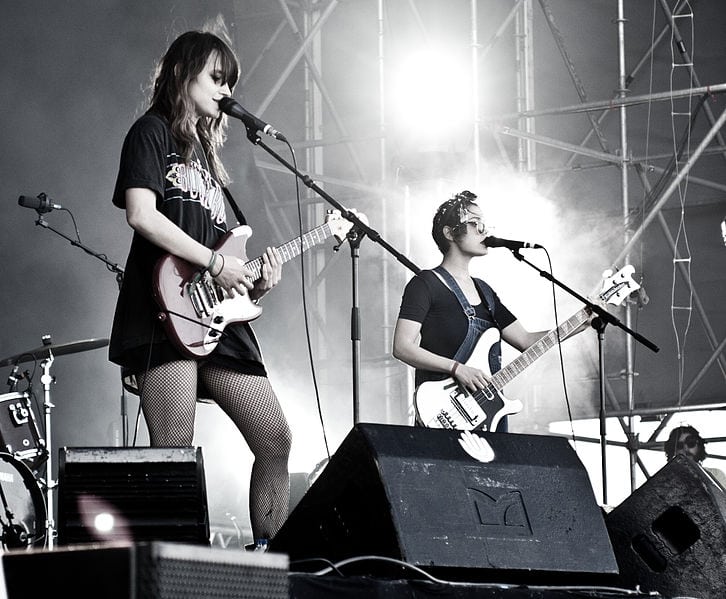 There’s something about Warpaint; soft-spoken but far from quiet. This is a four-piece all-girl band from LA, who demand appreciation of their imperfections by placing them centre stage and drawing attention to them. It’s these rough edges that stamp authenticity onto everything Warpaint do, breathing character and humanity into their performances. Thank god no-one has ever dared auto tune them: their off-key harmonies are beautifully eerie as they fill and weave between every iron arch of the Albert Hall with a supernatural tension. To close your eyes would transform them into Macbeth’s witches, screeching and chanting around a bubbling cauldron – 2 parts Joy Division, 1 part Foals and a sprinkling of chemical XX…

Yet despite the strong openers of ‘Warpaint’, ‘Composure’ and ‘Love is to Die’, it’s not until the warm fuzzy bass chords of ‘Undertow’ that the spell cast upon the audience takes hold. From there, the band blast through new single ‘No Way Out’, seven minutes of layered slow build and release that leaves you more dazed than amazed. This is the strange flipside to their carefree, take-it-or-leave-it attitude: a contagious lethargic atmosphere that stops the crowd from ever getting too riled up. Great if you came to stare at your doc martins for an hour, but not so much if you didn’t plan your day around the shoes you’re wearing.

After the sneering heartbreaks of ‘Elephant’, the band bust out a four minute improvised jam culminating in a drum solo that segues into the sinister understated violence of ‘Disco/Very’. This is the band at their very darkest, with their cries of “Don’t you battle we’ll kill you/We’ll rip you up and tear you in two” ringing out like the girl power anthem you never thought (or hoped) you’d hear. Like a light at the end of the tunnel, the bold bass groove of ‘Biggie’ finally gets the crowd moving before the encore break. When they return we’re treated to another new and upbeat song, ‘I’ll Start Believing’, before bringing down the energy with slow burners ‘Burgundy’ and ‘Krimson’, fading and flickering out softly as the show comes to its end.