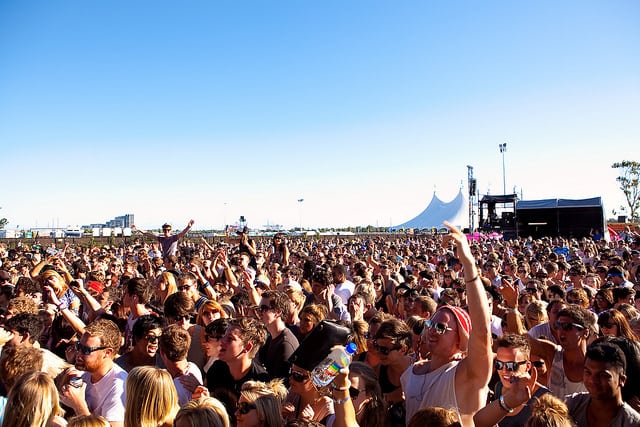 Barcelona’s musical showcase Primavera Sound can truly boast one of the most exciting line-ups of this year’s festival calendar. The Strokes are using the festival to make their live return, with very few global shows for their reunion announced so far. The festival’s other headliners are Alt-J, The Black Keys and the newly reformed Ride. There are tonnes of other hot acts playing the weekend, such as Antony and the Johnsons, The Replacements, Patti Smith, Belle & Sebastian, Caribou and Mac DeMarco to name but a few. If you can justify jetting off to Barcelona in the middle of exam period, do it. Matthew Staite

Berlin has its Berghain, Amsterdam has its Dekmantel and now Paris has its Weather Festival. Competing on sheer size and scale, the Weather Festival is an uncompromising showcase of everything you’d ever want to hear concerning House and Techno. It’s a huge expansive playground filled with various stages and a notably up-for-it musically focused crowd. Expect to be spoilt silly this year with acts such as MCDE, Mr G and Seven Davis Jr already confirmed, as well as the world premiering of some mouth-watering collobarations – our pick being Ricardo Villalobos and Peter Van Hoeson. Alyssa Vongapai

A beautiful retreat in to the Bulgarian mountains, Meadows in the Mountains is a festival emphasised on intimacy and community. A family run affair, Damian and Ben Sasse welcome you to their village of Rhodope allowing you to explore your quirkier and off kilter tastes in music amidst the stunning backdrop of their local countryside. No gimmicks, just a genuine love for music here. Anybody off on an interailing adventure this summer would best keep this festival in mind. Alyssa Vongapai

Born in the 90s, Sonar has grown exponentially since then into Europe’s premiere electronic music festival. Firmly a city festival, Sonar brings Barcelona to life with a string of parties that are way more fun than camping and provides festival goers with an opportunity to get acquainted with the endlessly cool Catalonian capital.

The deliberate mix of underground and mainstream makes Sonar special: exemplified by the Sonar by Day/Night setup. Sonar by Day showcases homegrown talent and keeps the underground roots of the festival alive while Sonar by Night is a concert arena with a renowned emphasis on the visual aspect of the performance – perfect to host the always-impressive international lineup.

Highlights are set to be the exceptional Mr Daniel Avery, The Chemical Brothers, Flying Lotus, Seth Troxler and Kindness. Duran Duran also promise to be plenty of fun.

Sonar is the unmissable start to festival season. Rachel Connolly

The festival that started it all. Croatia’s seminal and renowned The Garden Festival celebrates its tenth and final year from 1st – 8th July. Held in the earthly paradise of Tisno, you can bathe on the luxurious beaches by day and dance to some of the world’s finest electronic acts at night. The festival has gone all out for its last hurrah: DJ Harvey, Session Victim and Jackmaster are amongst the names helping them say goodbye in style. Tickets for the week long party are on sale now for just £120. Patrick Hinton

Portugal’s Super Bock Super Rock has done a good job so far at booking lots of bands making exciting comebacks to the live scene this summer. Florence and the Machine are stepping up to headline the festival after two years away, with Noel Gallagher’s High Flying Birds and the legendary Sting also headlining. Crystal Fighters also make their live return since the death of their drummer, and SBRTKT and Toro Y Moi will also be bringing their groovy dance music to the event. The Vaccines and Little Dragon have also been announced, as well as a rare collaboration between Franz Ferdinand and Sparks. Matthew Staite

After a year of living away from Mum and Dad with most (all) of your student loan spent up on rent, bills and ready meals, as you consider whether taking out an overdraft is really that worth it, for me personally it always seems like one of life’s biggest decisions as to where to spend my money in the Summer. Do I venture out of Manchester in search of some much needed sun, sand and sea? Or does the lure of a usually high quality billing at the likes of Glastonbury, Reading and Leeds or Latitude really tempt me enough to zip up my raincoat, dust down my wellies and have my tent at the ready for a weekend of camping in the Great British Summer?

But whether it be a sign of age or simply haunting past experiences with wellington boots and falling flat in the mud, but it has only become apparent in recent years that those clever enough can have the best of both worlds at a much more affordable, if not cheaper price away from staying home. Yes, take note as you deliberate and weigh up a weekend in Paris over a weekend in Pilton, that believe it or not it is in fact in possible to combine both a holiday in the sun with a festival boasting a line-up as good as any music festival hosted back home. And it is only thanks to the modern growth of music festivals overseas such as ‘FIB: Festival Internacional de Benicàssim’,that such an opportunity exists, allowing students to experience a festival and holiday like no other.

Festival Internacional de Benicàssim or more commonly known as FIB or simply Benicàssim, has continued to grow from strength to strength after its foundation in 1995, bringing a universal wave and mixture of rock, indie, pop and electronic music to Spanish shores. Taking place every July on the coast between Valencia and Barcelona, Benicàssim’s success in recent years is not solely down to its location next to the famous and somewhat iconic Benicassim beach, the electric atmosphere or even the fact music and widespread partying continues way into the night unlike the many festivals on British soil, or sludge after three days at Glastonbury. Instead different to many of the themed festivals you can often see throughout Europe usually sticking to a set genre, the likes of My Bloody Valentine, Oasis and Bob Dylan have all took to the main stage in recent years as headliners, offering a varied, unique and diverse yet consistently high calibre of acts, subsequently itś no surprise why Benicassim doesn’t struggle in attracting both a large audience from both the United Kingdom, European fans and of course natives, locals and fellow Spanish residents.

Acts continue to be announced on a monthly basis, as fans of the festival and ticket-holders sit and wait patiently for the line-up to slowly take shape. But if any of the previous years listings are anything to go by then it looks set to be another stellar year for the Spanish festival. Florence & The Machine and The Prodigy lead the way as early headliners, Los Planetas proudly fly the Spanish flag at the top of bill whilst some of the many popular additions ranging from the likes of English singer-songwriter Jamie T, Belgian DJ Stromae and American hip-hop group Public Enemy are really a true indication of the diverse range of acts the festival continue to attract each year.

As the festival enters its third decade somewhat differently to previous editions of FIB, 2015 also looks set to be an exciting year away from the music itself with director Melvin Benn keen to highlight the new Trenchtown and Bearded Kitten areas on the festival site. Both are new features this year to the festival and plan to build on the already grand offering entertainment throughout the festival site, away from merely the music on the main stages. Adam Selby

Melt! is an open-air cheerful and hip playground, with all the benefits of a huge festival. It takes place in quirky Ferropolis, an open museum of old huge industrial machines. It is very generous with its refreshing line up, with a spectrum of anticipated acts, ranging from global mainstream acts to underground. They will spoil you with Kylie Minogue, Bonobo, Nils Frahm, Clark and Zenker Brothers. There is an alluring lake to be taken advantage of to cool off after some heavy duty dancing. Expect to be spoiled with the ominously beautiful setting, pyrotechnics and astonishing quality and quantity of music. Alyssa Vongapai

Croatia is now awash with festivals, with the likes of Hideout and Outlook sitting firmly as mainstays on the European festival circuit, however Soundwave offers something refreshingly different. Taking place between the 6th and 10th of August, Soundwave is returning to Croatia’s idyllic Dalmatian coast for its seventh year.  Set in the small fishing town of Tisno the intimate festival is houses much more than just music, although the eclectic line-up is a good place to start. The likes of Craig Charles, Mr Scruff, Mala and Eglo honcho Alexander Nut will be gracing the festival alongside headliner Jay Electronica, spread across three stages and the now legendary open air after-party spot, Barbarella. As if that wasn’t enough there are also going to be artists turning the festival site into a living piece of art with street art and murals. Soundwave’s location also allows you the chance to day trip to one of a number of beautiful national parks such as the waterfalls and pools of Krka or the cascading lakes of Plitvice. All in all then, Soundwave looks set to be a winner yet again for all those making the trip to the Adriatic. Ben Allan

Holland’s best loved festival returns to its site just an hour outside of Amsterdam again this year for another weekend of craziness. The bill is stacked full of treats, with a day time and night time programme that caters to a variety of music tastes. The 250 strong list of artists performing ranges from Chemical Brothers to Kendrick Lamar, Mumdance to Marcel Dettmann, Paolo Nutini to Paranoid London, marking Lowlands as one of strongest line ups in Europe this summer. Full details can be found here.

Of course, the best festivals are the ones that allow you to truly escape from reality for a few days – not just music in a field, but an extravaganza of activities and oddities to lose yourself in. Lowlands provides this in abundance. Across the three days you can enjoy a diverse range of theatre, visual arts, comedy, cabaret and more. There’s even a theme park just over the road for anyone seeking more intense thrills.

Tickets are on sale now for just £136 and can be purchased here. All aboard the Camping Flight to Lowlands Paradise! Patrick Hinton

If the location – an abandoned fort on the coast of Croatia – was not already enough to get your festival glands watering (or, more accurately, sweating) then the line-up for Dimensions festival will leave you a mushy mess of musical hype. From the opening live show with Four Tet, Little Dragon and Floating Points – who will be accompanied by a small orchestra of classical musicians – to the stellar line-up which includes Moodymann, Mount Kimbie, Ben UFO, Pearson Sound, Daniel Avery and many, many more… This is set to be the supersized whopper of festivals abroad this summer. Lowell Clarke