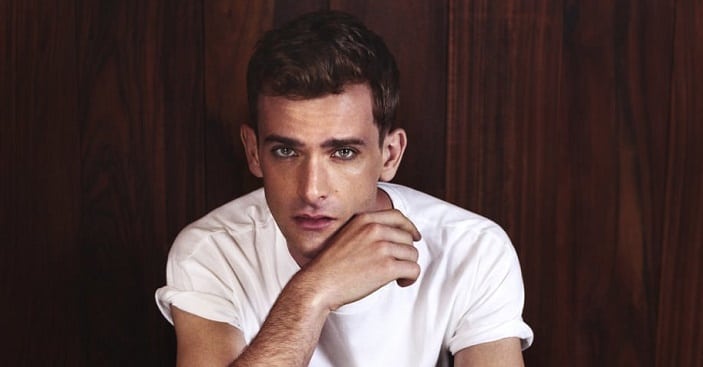 When I first met Josef Salvat I had already read articles about him, watched a couple of performances on YouTube and checked his clicks on Spotify. Let’s say I had an idea of Mr Salvat in my mind; a young man on the rise who seems to have his shit together—and does the music in that one Canon advert. I can officially confirm: He’s nice.

After meeting me we immediately sat down to talk. I sipped my beer, his drink of choice was tea—foreshadowing of a no excess mentality. Mr Salvat was born and raised in Australia, where he studied Law until eventually deciding to move to the UK. What for? For the simple reason of music! Josef explained that he has been doing music for as long as he can remember and named Amy Winehouse, Florence Welch, Mark Ronson and Rich Cooper as his major influences. In order to create the style of music he wanted, Josef argued, London is the place to be. Whereas upside down, apparently, is not. Fair enough.

While I was smooth talking him in the green room of the Soup Kitchen, the venue slowly filled up—with both people and tension. It was the second time he played in Manchester, so I tried to bring up some trivia into our conversation: The Soup Kitchen is opposite the Koffee Pot, namely the place where The Smiths used to hang out. In various interviews Josef has been compared to Morrissey (I am not a fan of stale comparisons, but I’d add that he looks a bit like Joaquin Phoenix’s younger, more stable brother). Because of that I had to ask him what he thinks about the Morrissey connection, and potentially annoy this charming man. However he laughed and said he does not particularly like him; there were far important musical mentors in his life which are mentioned above—though he appreciates what Manchester gave to his music history, of course. His bottom line was “The streets feel good here.”

So what is his general approach towards making music? One approach could be this: If you image-search Josef Salvat you will see a certain type of ‘corporate identity’. The face in press photos is blank, malleable. The type of self-assured face you can project things onto. The type of face that’s lived a lot but remains weirdly serene. So I asked if he tried to create a stage persona that differentiated from the private Josef Salvat. He grinned again and said: “This is just the part of me that makes music. But I wouldn’t say never.” A perfect example of keeping it simple.

So how does he get to know new music? Well, as it turns out he is not a great fan of Soundcloud, which one wouldn’t expect to hear from an artist in 2015. His channels are mainly YouTube and friends and everything in-between. As he was talking I looked at the wooden table in front of us. On it was ginger tea and orange juice. Unfortunately no booze was going on here, nothing exciting to write about. Just a nice talk with a man who apparently takes sobriety very seriously on stage. This sobriety would later be channeled into intense dancing spasms in the vein of Ian Curtis.

In Your Prime is his most recent EP, including his cover of Rihanna’s ‘Diamonds’. Josef told me that the EP was a collection of material he’d recorded over the last eight years. Songs and riffs he wrote a while ago, mixed with mint new stuff. His music, and especially his EP are part of an idea he described as “my music express[ing] life in the context of sometimes bittersweet songs.” It is supposed to be a little journey through life.

Josef is a really nice young man, who, by the way, did not get rich by making music for the Canon advert. Maybe he will when he releases his new album, which, according to the man himself, should be out by September 2015.