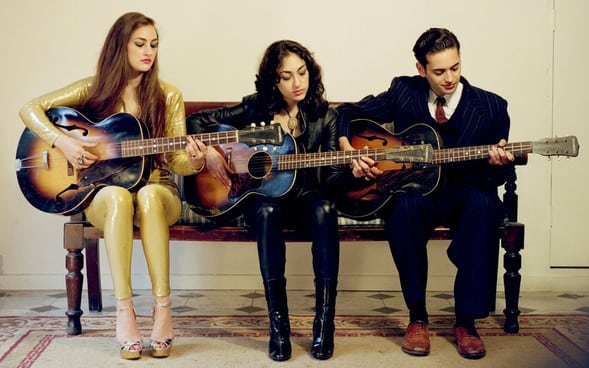 “I think we all agreed that we weren’t too keen on signing to a major label. You might achieve a number one album, but at the cost of them changing everything you do. That’s not what its about for us. We’re about playing music, and enjoying it”, reasons Kitty Durham, one third of trio Kitty, Daisy and Lewis.

With their distinctly retro style and image, it’s certainly true that the trio certainly don’t conform to today’s trends. However simply pigeonholing the band’s sound as retro would not be fair; the band incorporate elements of rock and roll, RnB, blues, rockabilly, country, swing and jazz to give it a modern twist. This retro image and eclectic mishmash of styles might not be everyone’s cup of tea, but there is no doubt their songs brim with an infectious energy, which translates extremely well when played live.

The band is also possibly unique in that it’s made up of three brothers and sisters, and the backing band are their parents. For Kitty, these family ties were instrumental to the band’s success. “We’re all comfortable jamming with each other, and we know what each other is good at. In growing up together, we’ve always had that connection and a way of playing together that doesn’t always happen with other people”.
Perhaps one of the most amazing aspects of the trio’s albums and live show is the rate they interchange instruments and vocal responsibilities; nearly every song sees them switch.

“Whoever writes the song has to be the one who sings it, as it’s about their personal issues!” laughs Daisy. “I guess you already have an idea of the where you want the song to go, but that often ends up changing. We all play each instrument differently, so it depends how you want each song to feel”. “Often the whole thing changes as we play it, and we shuffle it around. It’ll work itself out”, furthers Lewis.

The bands third album, aptly named The Third, came out in January. For Daisy, the album certainly marked a step up for the band. “We recorded our last two albums at our mum’s house in a small room, using a simple eight-track recorder (much more stripped down and raw sounding). This time we used a new studio that we built ourselves in a derelict Indian restaurant. It was shut down for, like, 10 years, so it was completely derelict”.

“We also had more tracks on the tape recorder this time, so we were able to experiment with a lot more instruments, and a string section. The production for this album is a lot bigger”, adds Kitty. Alongside the new studio, Lewis believes the introduction of a producer into process (none other than Mick Jones of The Clash), really helped to shape the album. “We’ve known Mick for a while. We got him involved and he did a lot of rehearsing with us for about 5 months before the recording. It was really good to play the songs a lot before we got into the studio.”

The band is signed onto the Sunday Best label run by Rob da Bank (who also runs Bestival festival). The freedom this has provided has been instrumental in the band’s direction and future ambitions. “When we joined it, they didn’t have Bestival yet, so they weren’t as prominent as they are now. They’ve always been really supportive, and let us do what we want with our records without too much interference”, remarks Lewis.

It’s nice to find a band that seems so comfortable and enjoying the level they are at. While the crowd at their Manchester gig certainly represents a dedicated following, its very easy to see why they have built up their fan base.