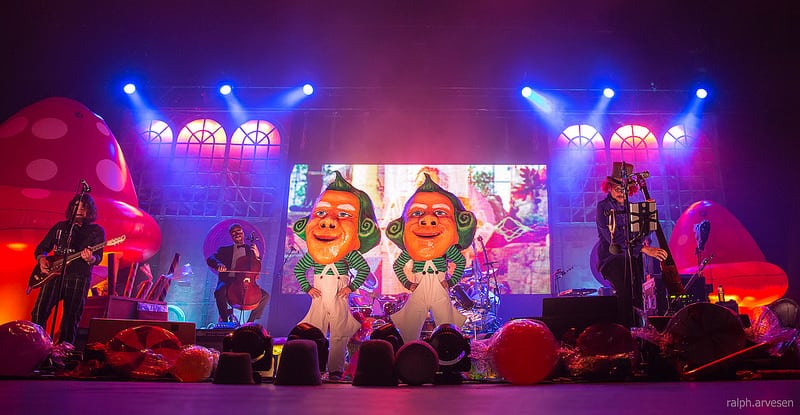 Covering such a soundtrack in its entirety isn’t something you would normally expect from a metal band, but given Les Claypool’s particular brand of eccentricity, this doesn’t come as too much of a surprise. This three-show tour (marking Primus’s first UK tour consisting of all three original members) comprised of a regular 1-hour set, followed by a stark change of scenery: when the curtains of the Apollo opened for the second time, the band members were accompanied by a load of props, a screen playing snippets from the 1971 movie – and most importantly, two very charming (if a little creepy) Oompa-Loompas.

The standard set was, at least as far as a band like Primus goes, pretty standard. The band played ten songs, and played them well, interspersing them with some fantastic improvised bass solos, as well as Les Claypool’s trademark goofiness.

Primus’s latest album, Primus & The Chocolate Factory with Fungi Ensemble unsurprisingly saw them reinterpret the film’s soundtrack. The album is a fun listen, but those familiar with the band’s sound will find no surprises in it, as it does little more than apply the Primus formula to those songs. Although in terms of sound it did not deviate so much from the album, The Willie Wonka set was really quite a spectacle: it was clear that a lot of effort went into the presentation, making for a really enjoyable and immersive show.

Writing this review, curiosity prevailed and I ended up eating their “Jerry Was a Racecar Driver” chocolate bar, purchased at the show. It’s the most intense chocolate bar I’ve ever tasted: it comprises the darkest of dark chocolate, mixed with roasted espresso beans. I don’t think it was meant to be consumed (rather, kept as a souvenir), but it certainly made for an interesting experience. All in all, the night was surprisingly predictable for any fan of Primus, partly in that it was great fun. It sucked.