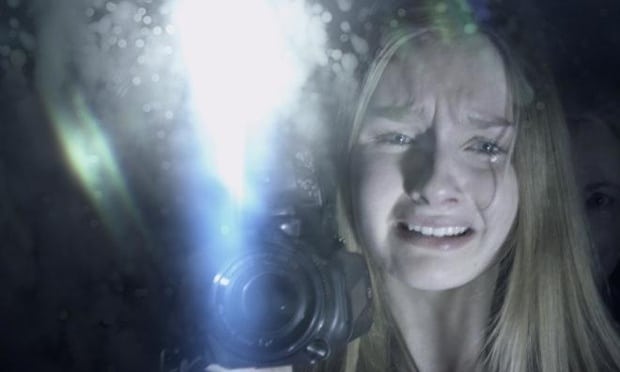 The Visit is written and directed by M. Night Shyamalan, a homemade documentary/found footage horror movie about two young teenagers spending a week with their grandparents Nana and Pop-Pop, whom they are meeting for the first time. Of course, things aren’t that simple and the teenagers being to notice some strange and disturbing behaviour, particularly once night-time arrives at 9:30.

The found footage element of this movie is incorporated through one of our two protagonists (Becca) being an aspiring filmmaker, who is making a documentary about the relationship between her mother and grandparents, neither of whom have spoken in over 15 years. This small drama element of the story is probably the most effective part of the movie, and although parts of it feel quite forced, it for once creates a believable and natural reason for everything around them to be filmed.

What interested me the most about seeing The Visit was that it marks a return to complete creative control for M. Night Shyamalan, reportedly using the money he earned from his last critically panned film, After Earth. On top of this the poster for The Visit looked somewhat intriguing, with Grandma’s ever ominous rules including have fun, eat all you like and never leave your room after 9:30.

Despite this, The Visit isn’t really a very good film—in fact, it’s quite bad. The tone of the film is all over the place, it can’t seem to decide whether it’s a horror film or comedy. It follows the typical Paranormal Activity-inspired found footage structure: Normal things that seem slightly off in the daytime, scary noises and jump scares in the night-time scenes. During these daytime scenes you must also endure the two extremely annoying siblings, one of whom is Tyler, a fourteen-year-old aspiring rapper with the wit of Oscar Wilde, and Becca, who spews technical filmmaking jargon left, right and centre, explaining each shot she is creating for the documentary, as if Shyamalan is trying to prove he knows what he’s actually doing. During these daytime scenes, however, there are a large amount of attempts at comedy, of which the majority fall completely flat. A prime example of this comes from Tyler and his three on-screen extremely long rap segments.  They may have been amusing for the first 20 seconds or so, but they quickly lose their charm and become awkward as you listen to the ironically misogynistic lyrics and shouts of “Hoe” spewing from his mouth.

I read an interview with M. Night Shyamalan stating they made three cuts of this film; one was a comedy, one a straight horror, and the final, used cut was a blend of the two. This is the film’s downfall, because the atmosphere of the film overall becomes a funny one, and any attempts at creepy, strange or weird behaviour then simply come off as funny. This isn’t to say there weren’t some legitimately well crafted moments, however they were too few and in particular too brief. One great moment, for example, was when Becca walks into the barn to find Pop-Pop with a shotgun in his mouth—but the encounter lasts maybe five to ten seconds, and we immediately revert back to Tyler’s wise cracks. Any tension or atmosphere is immediately lost. Besides a few nice moments, the attempts at horror are your run-of-the-mill Paranormal Activity-style jump scares, which was disappointing.

Ultimately, The Visit seems to boil down to another average found footage horror film, it’s just a bit smoother round the edges. The best praise I can give it is that it is probably Shyamalan’s best film since Signs, although in truth that isn’t really saying very much at all. As our smartarse protagonist tells his sister: “Nobody gives a damn about cinematic standards anymore.”