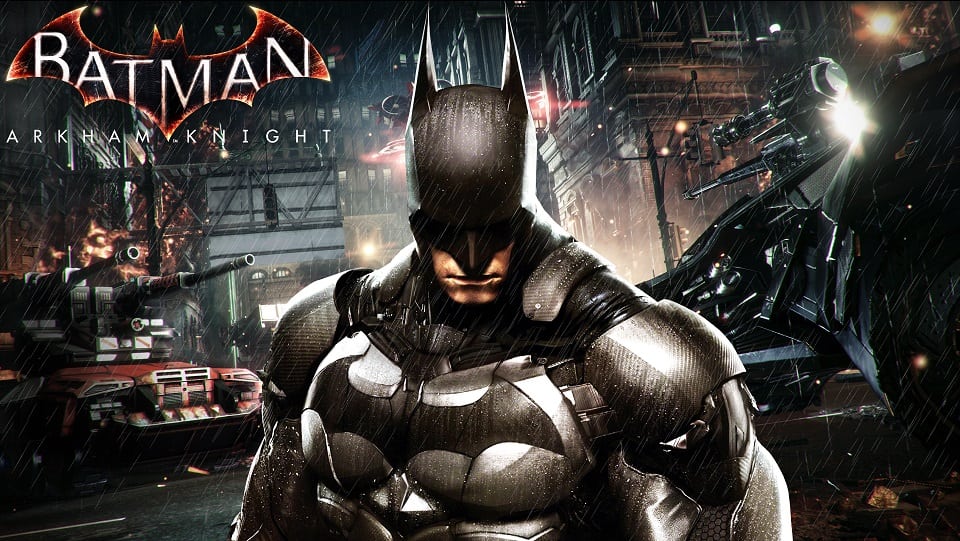 Rocksteady’s final entry in their Arkham trilogy has certainly been talked about a lot since its release at the end of June, but most of this has been about the controversy surrounding the issues with the PC release of the game. Its numerous issues quickly led to it being pulled from the digital shelves of the Steam store. That is not what I am going to be focusing on here as I played the PS4 version, and three of the DLC packs: Harley Quinn, Red Hood and Matter of Family.

At first glance, Arkham Knight isn’t too much of a departure from the gameplay formula that worked so well in the previous Batman titles; combat is fluid, navigating your way around the map is easy with the grapple and glide abilities, and use of the predator and detective modes do help to make the player ‘be the Batman’ as has been seen in all the advertising that surrounded the launch. Two additions have been made to detective mode, in the ability to ‘replay’ the events of a crime scene (a feature from Arkham City) and sifting through camera footage to work out what conspired before you arrived.

The main addition to the game is the Batmobile. This feature has divided some people as, despite the Batmobile being the Batmobile, it is used a lot, some say even too much. I personally thought it was a welcome change to the gameplay and is certainly fun to drive around Gotham and switch between modes on the fly, speeding through alleys one moment then becoming a tank the next. This does vary and enhance the gameplay, but it definitely feels that this was its purpose rather than aiding the story in any major way. Batman’s one rule is he will not kill anybody, so taking this tank of a car onto the streets and blowing up the Arkham Knight’s army is fine because they are primarily all unmanned drones.

This leads neatly into the story, and I will avoid spoilers here, even though the game has been out for a few months now.

Scarecrow has announced to Gotham that he will be unleashing his fear toxin on the city in a few days, so the entire city evacuates and it is left to Batman, his allies and the police to clear out the roaming thugs on the streets. My issue with this: Why did Scarecrow announce that he was going to attack, giving everyone the chance to run away so the toxin affects primarily affects his own men? This oversight seems down to the gameplay so you can drive the Batmobile like a maniac and not ‘stun’ innocent pedestrians like you do when your car comes into contact with the nearest enemy. So that is the main storyline: Stop Scarecrow. Helping the main villain however, is the title character of the game, the Arkham Knight. The Knight is a great character to have in the game, but the way the game constantly keeps nudging and prodding you to ask “have you guessed yet? have you guessed yet?” definitely becomes annoying as you get closer to the reveal. Personally I like Batman, I’ve seen the Christopher Nolan films, and I enjoy the world of the character, but I’m not entirely up on every piece of backstory to every single character. This made the reveal of the Knight very anti-climactic as I had pretty much guessed who it was before it was shown because, at a certain point, you are given a lot of backstory that whilst relevant to Batman, doesn’t seem relevant to the main goal of the game, making the connection not too hard to make.

Moving on before I do actually give any spoilers…

Other storylines are present as usual, with villains cropping up like Penguin, Two-Face and the Riddler (with his trophies that only completionists will collect all of) along with some other, less well known adversaries.

In terms of console performance the game runs fine, I noticed none of the issues said to have plagued the PC. Batman: Arkham Knight is very enjoyable and is by no means short. If you get one of the editions, which come with either the Harley Quinn or Red Hood mission, it adds a nice change to being the Dark Knight, however they are short, each lasting no more than an hour if that. I did buy the Matter of Family DLC where you play as Batgirl before the events of Arkham Asylum, which is longer and fun while it lasts, but none of these are long expansions, just nice additions that allow you to spend a little more time in the world of Arkham.

Arkham Knight is a great game and definitely worth a play through or two. The combat is as good as ever and the addition of driving around Gotham is a joy. While the story is not as good as the plot of Arkham City, it is still enjoyable and kept me interested more than Arkham Asylum despite the reveal of the titular character being underwhelming. The short expansions add some enjoyment but are not as enjoyable as the main game itself, so I do not recommend getting the season pass unless you are a huge fan.