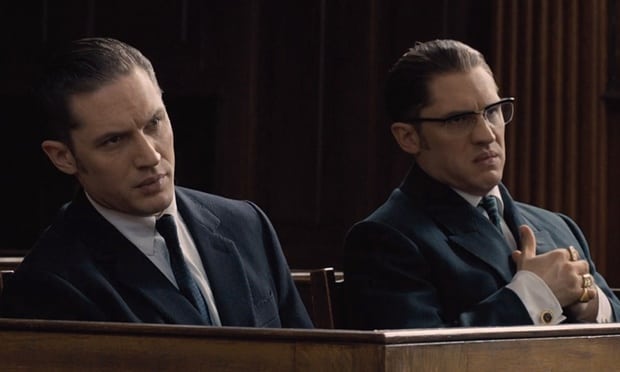 This hyped film broke box office records in the UK and Ireland and catapulted Tom Hardy right into the race of being the potential next James Bond. With his usual witty charm and enthusiasm for trying different accents, he portrays the notorious gangster twins Ronald “Ronnie” and Reginald “Reggie” Kray with strong East End cockney accents.

The biopic is based on the book ‘The Profession of Violence: The Rise and Fall of the Kray Twins’ and like most book adaptations with a weak storyline, the film starts with a narrator introducing the story and characters instead of relying on strong visual storytelling. The narrator later proves to be unreliable but for now, Frances (Emily Browning) is the love interest, and later wife, of Reggie Kray. Although she guides the audience through most of the film, her on-screen time is mostly limited to looking at her husband either longingly or disappointedly, the latter more often as the film reaches its end.

The other characters would have had more potential for captivating sub-plots if the focus on the romantic plot had not been so strong. Instead of showing more of the decline of the brotherly relationship and the deterioration of Ronnie Kray’s mental health, the main plot was the predictable romantic relationship of Frances and Reggie which was doomed to fail from the start due to her family’s disapproval and his bad influence on her.

The biopic did not concentrate enough on the rise and fall of the crime empire and the moral struggle faced by the gangsters, who were part of The Firm, the name of the twins’ gang. Due to the success of their nightclubs, they were quickly surrounded by celebrities and aristocrats, the latter of whom were compared to gangsters, since neither worked honestly for their money. Certain scenes portrayed their influence well but they seemed too rushed to leave a significant impression on the viewer.

Characters such as the smart Leslie Payne (David Thewlis) who is the business manager and brain of the planned crimes as well as the detective superintendent Leonard Reap (Christopher Eccleston), who relentlessly chases the gangsters, should have had more screen time. They are the only characters who are unimpressed by the twins’ inability to stay out of trouble and give the film the solid grounding it needs, since the viewer’s attention is constantly pulled from one plot line to another without a guiding thread. More focus on these characters would have given the film grounding and the weak attempt of a surprising plot twist distracts even further from the more interesting relationship between the brothers and other characters.

Frances’ ethereal beauty is highlighted and romanticised, as are the rest of the themes in the film. The East End of London in the 1960s and the gangster life of the brothers are partially shown through her eyes, and seem overtly colourful at first, as a reflection of her fascination with Reggie’s world, becoming less saturated towards the end of the film.

Furthermore, according to The Guardian, the film received criticism from the family of the actual Frances Kray for the inaccurate portrayal of their relationship, especially that rape was used as a plot device which Reggie was never known for committing and which was a weak attempt at giving the audience a reason to stop sympathising with him.

Despite the weaknesses of the film, the portrayal of Ronnie Kray was a strong point. A main character who is homosexual and mentally ill is hard to come by, and Tom Hardy manages to portray him in a very convincing way, although the character is sometimes used as comic relief in certain scenes. Furthermore, the great set design gives the film a smoky atmosphere of nostalgia of a time in London in which gangsters, and not foreign investors, reined in the streets of East London.