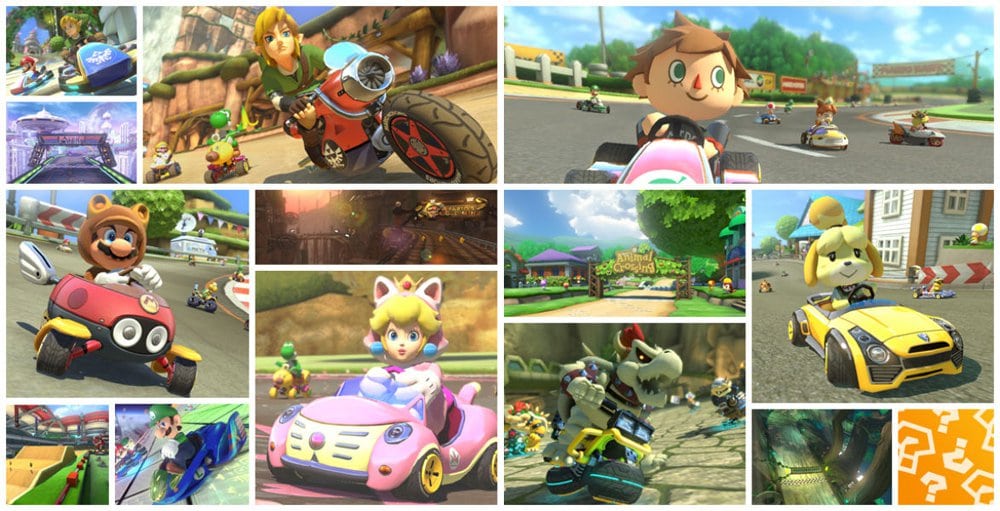 The Future of Mario Kart 8 DLC

In my opinion, Mario Kart 8 is the best Mario Kart game to date, and the DLC released alongside it is some of the best Nintendo have ever created (although to be fair, Nintendo are very new to the DLC market, unlike the majority of its competitors).

The Mario Kart 8 DLC is great quality content for an affordable price and has been well-received. Couple this with Nintendo’s hopes to continue releasing DLC for Super Smash Bros and Splatoon throughout next year (presumably to keep fans interested despite the lack of new releases scheduled), and suddenly Nintendo have future DLC planned for their most popular racing title. At the time of writing this article, Nintendo have not announced any plans to release new Mario Kart 8 DLC, and so everything from here on out is speculation from me.

I do feel like Nintendo needs to announce new DLC for Mario Kart 8 soon. I was expecting it to be announced last August, one year after the original Mario Kart 8 DLC was unveiled. As most Nintendo fans already know, we did not get a new Nintendo Direct this summer, unlike every other year previous, and this is most likely due to the upsetting passing of Nintendo’s CEO of both NOA and NCL: Satoru Iwata. He often hosted the Nintendo Direct events, and it is in one of these that something like Mario Kart DLC would have been announced. With rumours going around that a new Nintendo Direct will be revealed this week, this article may very well end up redundant. However, I feel it may still be fun to speculate on this next update.

We should look back at the past DLC to see the pattern that has emerged. In both DLC packs were: three new characters, four new vehicles and eight new tracks that form two cups. Both packs have been themed around a non-Mario Nintendo IP, and have each also included a track that pays homage to Nintendo’s other major racing series: F-Zero.

The first pack was Zelda-themed, and the second pack was Animal Crossing-themed. Both of these are major Nintendo IPs that do not differ drastically from the way Mario is presented. Link as a racer really was experimental, but they decided to go with his more cartoon-like Skyward Sword design in order to make him work. The cups involved in each DLC pack have differed from the norm by combining both returning and new tracks into the same cup. Lastly, any new Mario character included in the DLC has been a simple model swap of an already-existing character. Mario and his tanooki form, Peach and her cat form, and Bowser and his skeleton form.

Left in the games files were four unused icons for cups. As of now, only one of these icons has been used as part of the DLC, and that is the Yoshi Egg. This means that we could see three new cups coming as DLC, but I think that this is unlikely. The cups have always come in pairs and the last DLC was grouped into 2 packs; thus, I doubt that this new DLC will change that. For me, the Shine Cup is the most unlikely cup to make an appearance, and so this leaves us with the Boo Cup and the Spiny Shell Cup. As for which Nintendo IP we will see crossover? There are only really three that I think have a chance, but of these three, I believe Pikmin and Splatoon are the most likely (Star Fox is the third for those who wish to know). Pikmin for quite a few reasons: it is a franchise that is made by Miyamoto, just like Zelda and Mario; it has a new game pending release, as well as one already available on the Wii U platform, and it fits the Mario-theme better than Star Fox. Splatoon was chosen because it is Nintendo’s new and popular IP that also fits style-wise to Mario.

The Pikmin pack will come first and will introduce Captain Olimar and Alph from Pikmin as playable racers, while Captain Toad will be made to be the third. We know the creator of Captain Toad was in contact with the Mario Kart 8 team, requesting that the character be put in as DLC, and since he is a relevant Mario character, but can also be a model swap for the normal Toad, this makes sense. Two of the vehicles will be based on Pikmin elements: a Bulborb car and a Hocotate motorbike, while the other two will be a Minecart for Captain Toad and the Bumble V as a returning kart from Mario Kart 7. One cup will be the Pikmin Cup and will have a track based on the ‘Garden of Hope’, along with two returning courses and a new one. The other cup will be the Spiny Shell Cup, and will have an F-Zero stage based on ‘Port Town’, along with one new track and two returning. This mirrors the Animal Crossing pack intentionally. The F-Zero stage has been chosen both because it was in the original F-Zero, but also because it makes all of the F-Zero courses represented in Super Smash Bros.

The Splatoon pack will be second and will introduce the Inklings (both gender-forms as one character like the Villager), King Boo and Funky Kong. Funky Kong and King Boo are both veterans, and the former can be a model-swapped Donkey Kong, the latter from the Boo enemies found in some of the audience and tracks. The Inklings are the playable avatars, and will come in their amiibo colours. Orange for the girl and blue for the boy. There will only be one Splatoon-based vehicle, which will be an ATV based on the roller item. We will then get the Monster Car from another classic Nintendo IP called Famicom Grand Prix II: 3D Hot Rally, which also starred Mario & Luigi. The Mach Bike will return from Mario Kart Wii as a new bike, while, finally, King Boo will get a kart designed for him. The Boo cup will return and will contain Red Valley as its F-Zero stage and Luigi’s Mansion from Mario Kart DS will be another returning track. We will also get a track based on the previously-mentioned 3D Hot Rally game similar to the Excite-bike track we received. The final track will be brand new. The Squid Cup will have an Inkopolis-based level, where one drives around various parts of the city-based maps. Then, it will have two returning levels and one new track. This all intentionally mimics the Zelda pack and brings everything full-circle.

I never counted the 200cc, Mercedes-Benz or amiibo costumes as DLC because they were all free and separate from the packs. I do think that we will get more amiibo costumes, though.

It is also likely that an incentive for buying a season pass, just like before with the different-coloured Yoshi’s and Shy Guy, will arise. This time it will be Toads and Koopa Troopas, although they will come with less colours than the previous two.

With that, I think that the DLC will be finished for Mario Kart 8. With rumours of the NX to be ready for next summer or just after, the schedule seems tight.