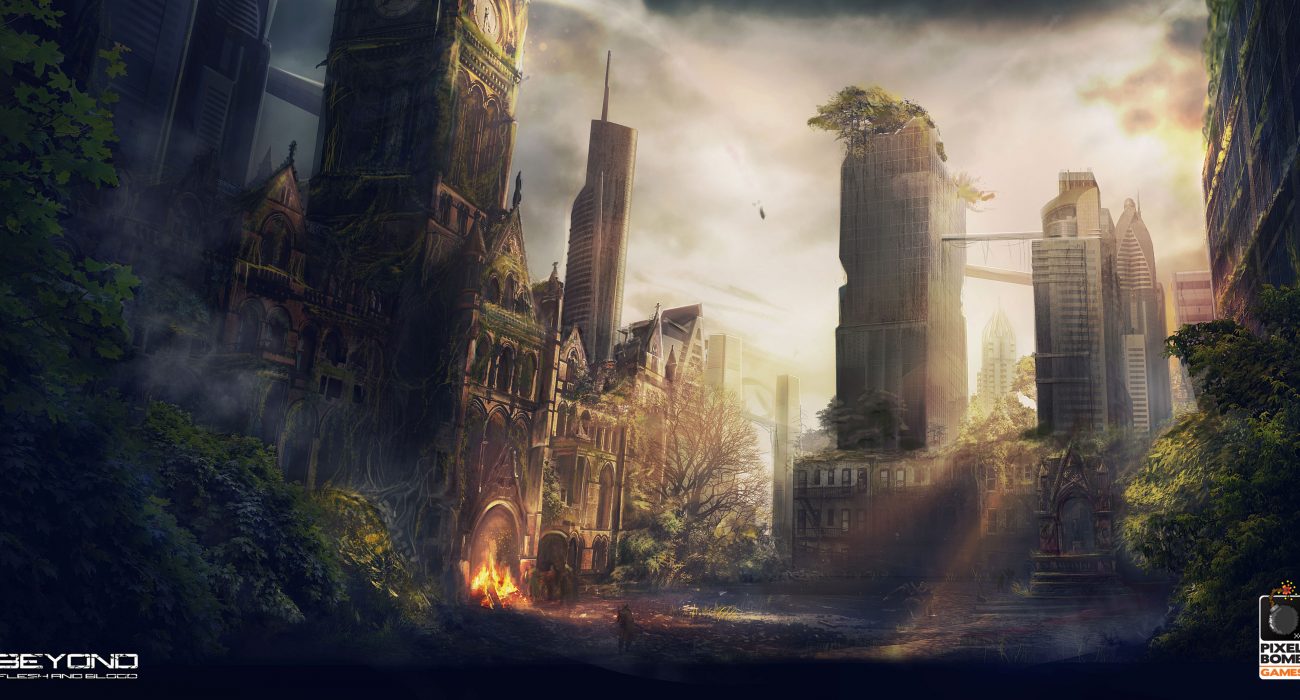 An Interview with PixelBomb Games

At this year’s Play Expo I was lucky enough to sit down and interview Manchester-based indie studio PixelBomb Games, who are developing a game set in Manchester called Beyond Flesh and Blood. This is their first game, and after playing it at Play Expo, I have to say that the team have done a wonderful job so far.

Hello. I am here at Play expo with PixelBomb Games. Would you like to introduce yourself?

Hello, I am Philip Muwanga and I am Lead Coder for Pixel BombGames and today I am here to show the game Beyond Flesh and Blood.

And would you like to tell me what your game is about?

Beyond Flesh and Blood is a third-person action adventure in the Unreal Engine, set in a post-apocalyptic Manchester 200 years in the future. It features gory, over-the-top action with 12 feet tall mechs and sleek prototype frames [manned robotic suits] with time-bending, anti-grav powers.

We are a Manchester-based studio, so it has been a joy and an honour for us to make our own interpretation of our home city. It’s based fairly accurately on the way Manchester is laid out. Most of the game takes place on Deansgate. You actually start the game in front of the Hilton and then from there to Deansgate, to Albert Square, to the Triangle and then past the Arndale, and we have made sure that they are as accurate a location as their real-world counter-parts. Obviously we had to take a few artistic liberties to allow for good game-play in these spaces—I believe our Deansgate is about twice the length of the actual Deansgate—but, if you have ever been to Manchester, you will recognize key locations and landmarks.

I’m curious, what video games helped to influence the creation of Beyond Flesh and Blood, if there were any at all?

Myself and my colleagues, we are old-school PC gamers, so we were inspired by games like Unreal Tournament. As much as I love Gears of War, I am tired of hiding behind walls and having to take cover. So, while the enemies in our game can take cover, you as the player cannot. Instead, you have to use your dodge skills as well as the suit’s abilities in order to stay alive during combat, much the same as it was in Unreal Tournament back in the late-90s.

I remember seeing PixelBomb Games at last year’s Manchester Play Expo and I was wondering what it has been like working with Play Expo these two years?

We met the guys who organise Play Expo at EGX in Earl’s Court a year ago and because we are a Manchester based-studio who are making a game set in Manchester, when we found out Play Expo was on we had to make sure we were a part of that. They have been great and have been really friendly to us. They have been a pleasure to work with and we will definitely be coming back next year.

Last year, this game ran on Unreal Engine 3 but recently it moved onto Unreal Engine 4. What was that like, moving everything from one engine to the next?

Why was the Unreal Engine chosen over other engines like Unity?

We have been working in the Unreal Engine on and off for about 10 years now, so it is like an old friend at this point. When we started with Unreal Engine 3, Unity was not quite at the place that it is now, and now that Unreal Engine 4 has come out, I am more than happy with how it works. Being able to have access to the C++ source code has allowed me to adapt the engine to any needs that I have. I cannot stress enough how much of a joy it has been to work with the Unreal Engine. It is a gorgeous engine. It allows us to render wonderfully high-res art assets and to make our version of Manchester look like a next-gen game.

So the game is currently scheduled for PC, Xbox One and PS4. What has it been like working with Microsoft and Sony to get this game up on their systems?

About a year ago to this day we were showing off a PC build of the game at last year’s Play Expo when a chap from Microsoft saw the game and liked what he had seen. It was through him that we managed to make some good contacts with Id and they have been great. They helped us with the application process. If we had any issues on the tech side then they were able to help us with those and we’ve got two dev kits for free. I can’t speak anymore highly about my experience with Microsoft. It has been a different process, heading towards Sony and the PS4, but things are currently in the works on that front. As for PC, we were green-lit within 13 days and are now good to go on Steam.

So, your game has Oculus Rift support. Was this a feature that you wanted since the very beginning, or was this something you thought would fit the game later in development?

In the game’s single-player campaign, you play as Ethan, who is not actually down on Earth but is instead on a space station in orbit, and from a terminal there he is controlling the Frames that are sent down to Earth. This ties in to our death mechanic, where you cannot actually die because if you lose a Frame then they simply send down another one from orbit. There is actually a wonderful scene at the start of the game where you see Ethan for the first time and he is wearing a headset that looks similar to an Oculus. This was all planned-out before Oculus became a thing, so it has been a joy for us to see the birth of this new wave of VR and be near the forefront of the studios who are able to develop for the Oculus.

The game has been in development for roughly two years now. When do you hope to have a release date?

We have been thinking about going into early access on the PC before this christmas and then we are aiming for all our platforms, Xbox One, PS4 and PC in Q1 2016.

OK, well thank you for having this interview with me and I hope everything goes well for the future of your game.

It has been my pleasure and I hope you enjoy the rest of your time at this year’s Manchester Play Expo.