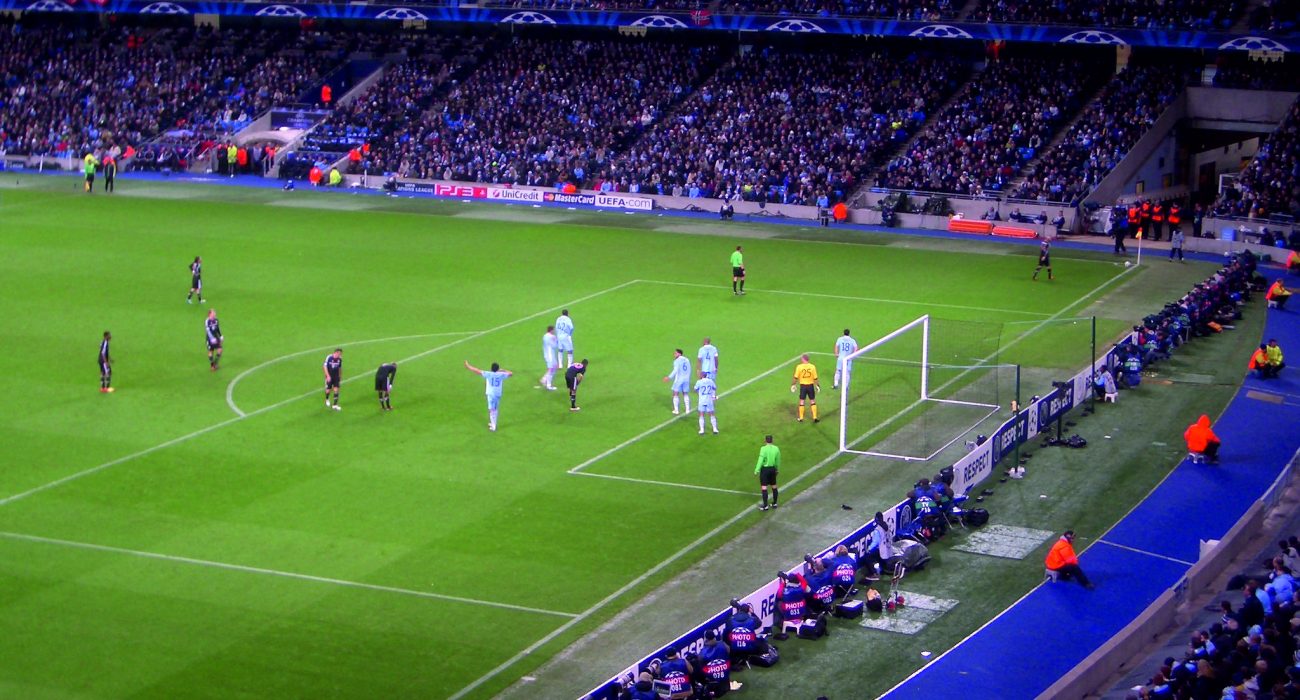 Ahead of the weekend’s derby, there were European duties for both Manchester clubs. City faced a well-organised Sevilla side in Manchester while United travelled to a freezing Moscow to face the Russian giants CSKA Moscow.

City set out with the same side that bullied Bournemouth last week. They hoped that Raheem Sterling and especially Wilfried Bony could keep up their form from the weekend. Bacary Sagna also kept his place at left back, as Alexander Kolorov was deemed not fit enough to start. Interestingly, captain Vincent Kompany remained on the bench with Manuel Pellegrini favouring the centre back duo of Nicolás Otamendi and Eliaquim Mangala—who the Chilean praised after the game.

City started the first ten minutes impressively with Jesús Navas, playing against his old side, fizzing an effort from 25 yards just past the post. However the Europa League champions quickly took hold of the half with Éver Banega, Vitolo and particularly Yevhen Konoplyanka causing the City defence numerous issues with their pace and creativity.

In the 16th minute it was the Ukrainian Konoplyanka who came closest to scoring for either side as his clever free kick caught out an unprepared Joe Hart at his near post. The strike rattled the post and seemed to give the Spanish side the initiative to intensify the pressure on the City goal. It was from the resulting corner that they came close again but the flick from the commanding midfielder, Vicente Iborra, was not capitalized on at the back post by striker Kevin Gamiero.

Soon after, City did come close to scoring themselves. Against the run of play Yaya Touré’s deflected strike from outside the box was inches from creeping in.

Nonetheless, this did not deter the attacks of the Andalusian side who were finally rewarded for their dominance in the 30th minute. It was once again the three behind the striker who were the instigators. Banega was fortunate as his pass to the right back Coke ricocheted off Kevin De Bruyne into the path of Vitolo, who cut back a perfect pass for the unmarked Konoplyanka who tucked away the opener at the far post. It was no more than Sevilla deserved, having threatened on the counter all game and really exposed the flaws in City’s defence—a common feature of their European adventures. The goal also meant that City have still only kept one clean sheet at home in the Champions League, a worrying stat for City fans.

The goal did however seem to bring alive the attacking talent among the City ranks. In the 35th minute, Yaya Touré produced a trademark surging run through the midfield and found Navas on the right hand side. He returned the favour, playing the ball to Touré who was now inside the box. He then managed to outmuscle the French centre back Timothée Kolodziejczak and fire a cross towards Sterling whose effort was saved by the keeper. Wilfried Bony was the first to react and his rebounded effort deflected off Adil Rami and into the net. It was exactly what City needed as they were being well and truly dominated up to that point. It allowed them, somewhat fortunately, to go into the break level.

The second half was a much cagier affair as City sat back more and gave Sevilla far less room on the counter. Chances were sporadic but one of the best ones fell to the disappointing Gamiero just ten minutes into the second period, when he blazed over a free header inside the six-yard box. It was a missed opportunity that Unai Emrery and his side would live to regret.

Pellegrini made a confusing substitution in the 76th minute when he took off his only striker Bony for Fernando, a defensive midfielder. Although Bony had been isolated all night, it was a home fixture in a tough group and most would see such a decision as negative, as City certainly needed the points. He subsequently placed Kevin De Bruyne up front and moved Yaya Touré higher up the pitch.

As the game stretched late on, it proved to be a masterstroke as the pace of De Bruyne up front was far more effective than the hold up play of Bony. In addition, it gave Touré more freedom to attack in the last period of the game.

It was the combination of those two that eventually won it for City. In injury time, Touré received a pass inside his own half with an empty middle of the field to attack. He brought it forward 40 yards where he played it out to De Bruyne on the right hand side. The Belgian then took advantage of the tired Sevilla defence, cutting in onto his left and dispatching a strike into the far corner.

The goal proved to be the winner. Heartbreaking for Sevilla who put in a really impressive performance at the Etihad. For City, however it was a brilliant result against a well-balanced and dangerous side. It also shortened the gap behind Juventus to two points, as they were held to a goalless draw against Borussia Monchengladbach. In terms of the weekend’s derby, they will be high on confidence after such a dramatic win, although Pellegrini will be hoping for an improved performance from the defence who were shaky in the first half. The end to the game will also leave him with a decision to make over whether to possibly start De Bruyne up front from the start.