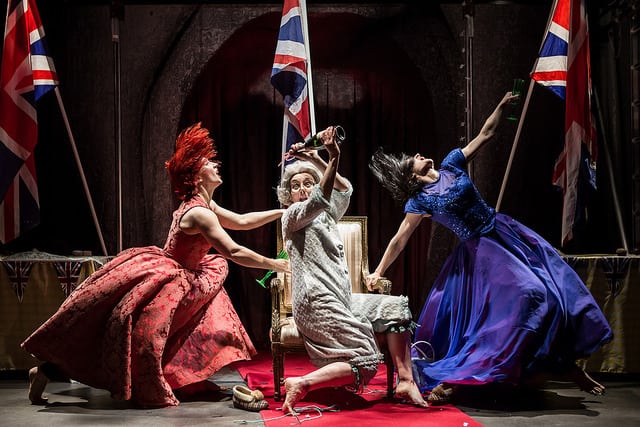 We Want You To Watch by Alice Birch Photo: Richard Davenport

Review: We Want You To Watch

Comissioned by the National Theatre, ‘We Want You To Watch’ is made up of four playlets, which each combine expressive movement and monologue in order to rouse debate. Our two central characters, Pig and Sissy, take us on a non sequiturial adventure, ranging from an interrogation regarding the murder of a dental student, to a situation with the Queen, conveying what sex feels like through interpretative dance, before the three of them perform to Beyonce’s ‘Run the World (Girls)’ complete with giant Union Jacks. Slightly different, isn’t it?

Pornography itself is a subject particularly ripe for theatrical debate; however, the production permitted only brief moments where questions were raised before cutting to our two central characters trying to get the internet switched off. The piece constructed does well to raise issues of debate, but unfortunately falls short of actually exploring them. And if they were truly explored, the absurd nature of whatever fantasy realm we were introduced to distracted us from the point at hand.

It cannot go without note that RashDash are a physical theatre company, who in total have won two Fringe-First awards, The Tods Murray Awards for Best Book and Innovation in Musical Theatre, whilst also receiving nominations from Total Theatre and Off West End Awards. Abi Greenland and Helen Goalen worked tirelessly throughout the performance, exuding the palpable feminist anger that goes hand in hand with what the show was hoping to confront.

An issue many audience members may have had towards the production is the lack of continuity between the playlets. There existed Andy Warhol-esque style cans framing the stage, with the word ‘Sex’ stamped across them. At one point, an old man wandered onto the stage and proceeded to drop his shopping before someone put a Snow White mask on whilst dry humping the air. There was almost an unspoken suggestion that having such bold and, quite frankly, ludicrous scenes, was something done merely for effect.

While We Want To Watch You is well-intentioned, its spontaneous and often hysterical nature leaves it missing the mark.