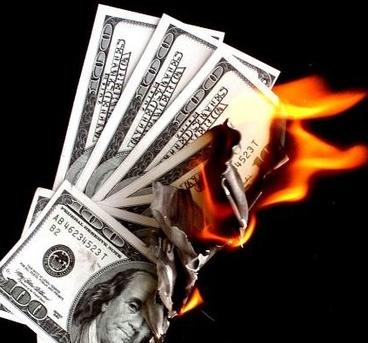 An art student plans to set fire to his entire student loan in a protest against capitalism. The controversial statement by Brooke Purvis, a student at Central Saint Martins, a prestigious art school in London, is part of a project entitled ‘Everything Burns’.

In an interview with Vice, Purvis stated that the exercise was to show that money “holds absolutely no value whatsoever.” He claimed that money is not based on anything substantial and lamented the fact that “banks can create it out of nothing.”

The reasoning he gives behind burning the money is that it would release “the bondages that society and our own minds have placed upon us all.” He acknowledged the publicity that the project is generated and argued, “in this day and age, how do you get people interested in a subject that’s important?”

Although the 24-year-old mature student sees it as an artistic statement, it has not been well received by some people, in a time when many people are struggling financially. When it was suggested that the money could have gone to a charity, he was defiant in his response: “Charity is capitalism’s solution to the problem it creates. But it’s my money; I choose to do what I want with it.” In addition to his full-time studies, he works a full time job, so it seems that he is not as dependent on the funding as some students.

The protest follows a similar act by Chilean artist Francisco Tapia last year. He set alight to documents to represent the student debt at Universidad de Mar, some $500 million (£326 million). When doing so he made a similar claim to Purvis, that the students at the university had been “freed.”

The project will culminate in the burning next year, around the time of Purvis’ graduation.